B.J. Daniels is officially listed as the Seahawks third-string quarterback. But he can play almost every other position. 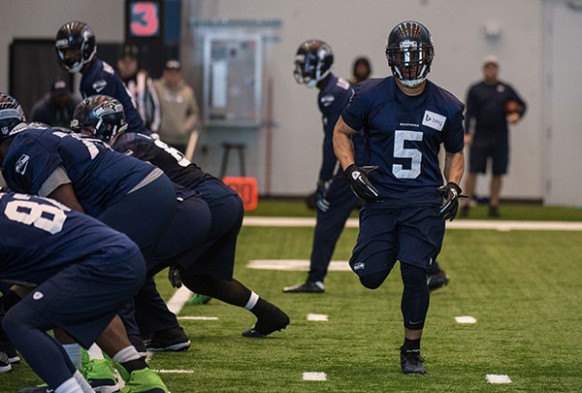 RENTON — Let it be known that B.J. Daniels can’t play on offensive or defensive lines.

“Anything other than that,” said WR Ricardo Lockette, “he can do.”

That is the simplest way to explain why the Seahawks chose to add Daniels, the third-string quarterback, to their 53-man roster Monday after rookie WR Paul Richardson was placed on injured reserve because of a torn ACL in his left knee.

In practice, Daniels is the baseball equivalent of a utility player. Among his responsibilities: Kick returner, punt returner, wide receiver, quarterback, running back, cornerback and safety.

“In this game, he’s going to be a special teams guy if he’s in there,” said coach Pete Carroll. “We could play him at quarterback if we needed. And if we had to spot him in there, he could be an emergency running back — and he can play the zebra spot for wide receivers.

Daniels, 25, has never appeared in an NFL game and spent the duration of this season as an asset on the Seahawks practice squad after failing to make the team out of training camp. This after Seattle claimed him off waivers from the San Francisco 49ers in October 2013, released him in November, then re-signed him to the practice squad two days later.

Since joining the Seahawks, he’s been active for one game — last year against the Falcons — while doing everything he can in practice to show that can be a valuable addition to the active roster.

That meant learning plays on offense and defense, a transition made easier by his days playing quarterback at University of South Florida before the 49ers took the 5-foot-11, 217-pound Tallahassee, FL. native in the seventh round of the 2013 NFL draft.

“As a quarterback you have to know offense and defense so it’s not too much different,” Daniels said. “I don’t have to study or be someone else. I can just be myself in practice. I’ve been blessed with the ability to catch and run and throw, so if that’s what I have to do, that’s what I’m doing.”

He’s earned the respect of Seattle’s wide receivers, in particular.

“I can’t say enough about B.J. Daniels,” Baldwin said earlier this week. “He’s an unbelievable athlete, just capable of doing everything. Obviously, we know him as a quarterback. He’s got a great arm. Great accuracy.

“But his athletic ability is what stands out to me. Not only when he goes to play receiver, but as a kick returner, running back on our scout team. He showed a tendency to catch the tough catches in traffic.”

That doesn’t necessarily mean that Daniels is going to jump in Sunday and play the slot wide receiver spot in his first NFL game. But for the past three or four months in practice, he’s worked as a kick and punt returner.

“He makes guys miss when he’s at running back and at kick returner,” Baldwin said. “He has a lot of attributes that I hope are going to lead to his success in this league.”

Richardson emerged as Seattle’s primary kick returner before getting hurt. WR Bryan Walters hasn’t had much of an impact as a punt returner since assuming the role early in the regular season after FS Earl Thomas muffed a punt in the opener against Green Bay.

When asked Friday, Carroll declined to reveal who he plans to start at kick returner. Baldwin is an obvious candidate. He had a 69-yard return in the second half of last season’s NFC Championship against the 49ers, helping spark a 23-17 win. He’s played there some this season, too.

Is he worried Daniels will beat him out?