Marshawn Lynch’s plan was to come out in gold cleats, as forecasted by TMZ Sports Saturday. Custom shoemaker Solesbysir claimed to have used 24K gold flake paint with a gold chrome plate soles, with a claimed value of $1,100. But … 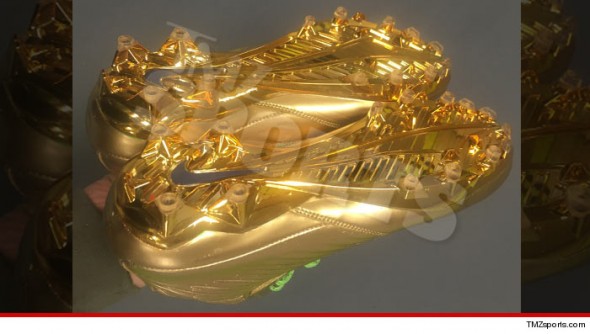 Marshawn Lynch’s plan was to come out in gold cleats, as forecasted by TMZ Sports Saturday. Custom shoemaker Solesbysir claimed to have used 24K gold flake paint with a gold chrome plate soles, with a claimed value of $1,100.

But according to Jay Glazer during the FOX pre-game show, the NFL threatened to eject  Lynch if he wore the gold cleats in the game. The Seahawks apparently successully prevailed upon Lynch to wear the proper uniform. He came out in regulation footwear

Glazer also said that while the NFL had threatened ejection, they probably would just prohibit him from entering the game while he was wearing the gold shoes.

He would almost certainly draw another fine from the NFL for violating the league’s policy on uniforms. Golden cleats are a  statement but they do not really affect your game in any way. If someone is looking to get a pair, Lilly Harvey made a list of the top options for the money on her shoe-dedicated blog website Shoe Adviser.

An overnight storm that raked the area knocked out power to about 92,000 customers of Puget Sound Energy, the region’s largest supplier, threatening a blackout of the game telecast. Kitsap County was hardest hit. The winds subsided by mid-morning, but gusts were forecast through the day that may slow repair crews.

PSE issued a a statement: “We recognize the inconvenience these outages are for our customers, especially on Championship Sunday. Crews will be assessing damage and restoring customers as quickly as we can. If you’re currently without power, we recommend making alternate plans for watching the Championship game today.”

A plane trailing the banner @UltraViolet: #GoodellMustGo, was to have circled the Clink sky before noon to protest NFL Commissioner Roger Goodell’s mishandling of the NFL’s domestic violence problem.

The group paying for the flight, WeAreUltraViolet.org, says it is an online community of 600,000 women and men who want to take collective action to expose and fight sexism in public and private sectors and the media, also spent for a 15-second video ad, which will appear on si.com.

A similar flight was to have taken place over Gillette Stadium in Foxborough, MA., site of the AFC Championship. The group says it is protesting Goodell’s action in more than 55 domestic violence cases, including the Ray Rice case, demanding that he step down.

The protest follows the release of a report by former FBI director Robert Mueller in past week that said the league was derelict by not taking initiative to uncover the facts in the Rice case.

The report highlighted the need for additional scrutiny of the NFL’s prosecution and handling of domestic abuse cases.

“More than 55 cases of domestic abuse have gone unanswered under Goodell’s tenure,” Shaunna Thomas, co-founder of UltraViolet, said in a press release that mentioned a charge of rape against Colts LB Josh McNary, who was suspended in the AFC Championship. “Plain and simple — the NFL has a domestic abuse problem, and it simply doesn’t have the leadership to fix it.”

Britt out, Bailey in

Rookie RT Justin Britt was on the inactive list for the game. He missed practice this week after injuring a knee against Carolina. Alvin Bailey, who played left tackle and guard this season, took snaps at right tackle.

Also, B.J. Daniels, who was activated this week to replace injured WR Kevin Norwood, was not activated.

Stat of the wet morning

Seahawks QB Russell Wilson has fumbled 12 times this season. He has lost none. Finally, a virtue to being the shortest guy on the field.