Favored by seven points, the Seahawks rallied from 16-0 down to defeat the Green Bay Packers 28-22 in overtime and will play in the Super Bowl for the second consecutive season. 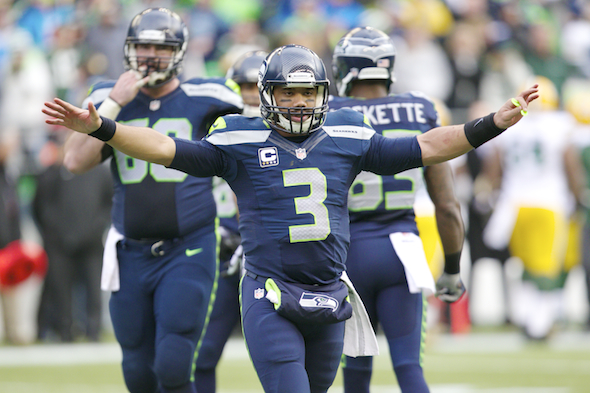 Russell Wilson and the Seahawks rebounded from a 16-0 deficit to beat Green Bay and advance to the Super Bowl. / Drew Sellers, Sportspress Northwest

There IS crying in football.

Moments after throwing a 35-yard, overtime touchdown pass to Jermaine Kearse to end the most improbable victory by any team in Seattle pro sports history, Russell Wilson unabashedly shed tears in front of a national television audience as he celebrated a 28-22 victory over the Green Bay Packers that clinched a return trip to the Super Bowl. They will play the New England Patriots, who beat Indianapolis 45-7 for the AFC title, Feb. 1 in Glendale, AZ.

No team has repeated as Super Bowl champion since the Patriots in 2003-04.

“What made this game so special,” said Wilson, wiping away his tears, “was all the ups and downs. But we continued to have no doubt that we would win. We believed.”

Almost no one else did. How could they? The Seahawks trailed 16-0 at halftime and 19-7 with 3:52 remaining — 3:52! The 12th Man seemed doomed to repairing to Pioneer Square watering holes to drown collective sorrows and wait for next year.

Up to that point, Wilson, he of the charmed life since he entered the NFL in 2012, had played the worst game of his NFL career with a career-high four interceptions and a 30.2 passer rating. But . . .

A series of jaw-dropping theatrics rolled out that will be talked about as long as pro football is played in the Emerald City because, well, you can’t make this stuff up.

Trailing 19-7 after an historic special-teams touchdown, Wilson consummated a seven-play, 69-yard drive with a one-yard touchdown run that ate only 1:43 of clock. Packers, 19-14, 2:09 to play.

On the ensuing onside kick — these things almost never work — Seattle’s Chris Matthews, a player nearly uncalled upon all year, surprisingly came up with the ball. That set up a 24-yard touchdown run by Marshawn Lynch, giving the Seahawks a 22-19 lead. 1:25 to play.

Packers QB Aaron Rodgers, whose much discussed calf injury hampered him only occasionally, quickly moved the Packers into range for a 48-yard field goal by Mason Crosby, his fourth of the game. Seahawks 22, Packers 22. Overtime.

The Seahawks won the toss and then the game. After Wilson hit Doug Baldwin for 35 yards, he threw a perfectly placed ball to Kearse for the winning touchdown, lofting it on an arc that only Kearse could capture. Kearse smothered the ball into his chest, putting Seattle into the Super Bowl.

Prior to that play, Wilson had targeted Kearse five times, resulting in four interceptions and an incompletion.

“It was just an extraordinary thing to witness,” said head coach Pete Carroll. He wasn’t wrong. Seattle’s comeback was the greatest in NFC Championship-game history, topping a 15-point rally that Indianapolis executed against New England in 2006.

“So many different guys had to step up to make things happen today,” Carroll added. “This is a tremendous accomplishment to get back to the Super Bowl. The journey was extraordinarily fun. Today, this was about a bunch of guy joining together and having a tremendous amount of faith.”

“This is a horrible one to swallow,” said Green Bay coach Mike McCarthy. “The Seahawks made some huge plays that kept them alive and that’s the difference between winning and losing.”

Play No. 1: With the Seahawks trailing 16-0 in the third quarter and facing fourth down, they lined up for a field goal. Holder Jon Ryan took the snap and threw a 16-yard touchdown pass to rookie Garry Gilliam that flummoxed the Packers, and closed the gap to 16-7.

“We practiced that all week,” said Gilliam. “It just happened that the situation came up and Jon threw a great ball and I caught it.”

Play No. 2: After Wilson scored to make it 19-14 with 2:09 to go, the Seahawks’ defense had a big stop and Seattle went 50 yards in four plays with Lynch scoring on a 24-yard run. The key moment followed: Pursuing a two-point conversion, Wilson, after a wild scramble, found TE Luke Willson, whose catch gave the Seahawks a 22-19 lead at the 1:25 mark.

Play No. 3: Wilson, unrattled by four interceptions, threw 35 yards to Baldwin, which set up his game-winner to Kearse.

“I let some balls get away from me earlier in the game,” said Kearse. “But on that pass I had no doubt that I was going to catch it.”

Wilson, who entered the game with the highest postseason passer rating in history at 109.6, finished with a 44.3, a number almost guaranteed to lose. But Seattle’s defense held Rodgers to 55.8, intercepted him twice and made key stops throughout the second half.

As a measure of how big this comeback was: The Seahawks had five turnovers and still won. In the first half, Seattle didn’t get a first down until late in the second quarter. At halftime, Seattle had no points, three first downs, three turnovers and seven penalties. Wilson had a passer rating of 0.00. It looked like an epic face-plant in the making.

But the offense got going in the second half, largely due to Lynch, who ran for 157 yards. And finally, Wilson and Kearse teamed up on one of the greatest plays in franchise history to send the Seahawks back to the Super Bowl.

“This is just an unbelievable team,” said Wilson. “Four interceptions. I didn’t play well, but you just have to keep playing and believing. I have to give a lot of credit to the Packers. But it’s an honor playing on this team. We just keep believing.”

Wilson is 10-0 against quarterbacks who have won a Super Bowl . . . Richard Sherman, who injured his left elbow running into teammate Kam Chancellor, had his second interception of this postseason in the first quarter . . . Ha Ha Clinton-Dix’s interception in the first quarter was the first off Wilson in 91 postseason attempts . . . With his pass in the third quarter, Jon Ryan became the first punter in NFL history to throw a TD in a championship game . .. The Seahawks are 14-12 all-time in postseason, including 11-2 at home . . The Seahawks have won their past nine postseason games dating to 2005.