A pair of momentum-changing special teams plays by the most unlikeliest of Seahawks helped Seattle pull off a historic comeback in the NFC title game. 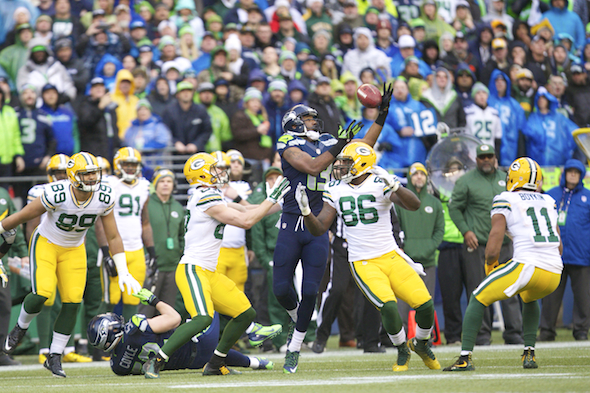 Score one for punters everywhere.

On an afternoon when Seahawks QB Russell Wilson posted a passer rating of 0.0 in the first half (2-for-9 for 12 yards and three interceptions), it was Seahawks P Jon Ryan who  sparked Seattle’s passing game in the third quarter of Sunday’s NFC Championship against the Packers.

Facing a fourth-and-10 at Green Bay’s 19-yard line, the Seahawks lined up in field goal formation. With Ryan serving as holder, he took the snap, and after K Steven Hauschka swung his leg and purposely whiffed, Ryan rolled to his left to escape pressure, then lobbed a perfect throw to OT Garry Gilliam, an eligible receiver on the play, in the end zone.

The touchdown was the first — passing or running — of Ryan’s NFL career. After the extra point, it cut Green Bay’s lead to 16-7 and provided the CenturyLink Field-record crowd of 68,538 a reason to believe the Seahawks weren’t going to be blown out. Seattle came back from a 16-point deficit — the largest rally in a conference title game — to win 28-22 in overtime.

It gave Ryan, a six-foot, 217-pound veteran built more like a linebacker than a punter,  an “I told you so” moment on a national stage.

“Man, I’m so sick of people saying punters aren’t athletes,” he said. “They can say whatever they want. I don’t really care. That just sounds ignorant now when they say they’re not athletes.”

Ryan admitted he wanted to take off for the end zone on the play, a run-pass option. The 33-year-old Regina, Saskatchewan native said he ran for a few first downs during his two-year stint in the CFL — he played for the Winnipeg Blue Bombers in 2004-05  — but never reached the end zone.

Regardless, crack a Molson and scarf down some poutine. All of Canada may now rejoice.

According to Sportsnet, Ryan is the first Canadian to throw a touchdown pass in a playoff game since Calgary-born QB Mark Rypien, a former star at Washington State, passed for one Jan. 2, 1993 while playing for Washington.

“They always say, act like you’ve been there before, but I hadn’t,” Ryan said. “If I got there I would have made an ass of myself. I was hoping to run it in but it didn’t work out that way.”

The Seahawks installed the fake field goal at Thursday’s practice after the coaching staff noticed a weakness in the way Green Bay defended field goals and extra points. Gilliam, a six-foot-six, 306-pound rookie who at Penn State primarily split time between tackle and tight end, hadn’t caught a pass in a game since his senior season in Happy Valley.

“Coach Carroll came up to me plenty of times this week, and said, ‘We’re gonna run the play. Are you ready?'” Gilliam recalled. “I said all right, I’m ready.”

After watching the Seahawks offense struggle for most the game, Carroll said he couldn’t wait to call the play.

“I really believed in this fake,” he said. “I thought we had a great shot at it, because I believe in Jon Ryan’s ability to come out of there exploding like he did. It really was the first opportunity we had. I couldn’t wait to get the thing called.”

It was the first of two game-changing special teams plays that turned momentum in the second half. The second came just before the two-minute warning after the Seahawks manufactured a seven-play, 69-yard scoring drive, capped when Wilson scrambled into the end zone from one yard out.

The Seahawks trailed 19-14 and had one timeout left. Everyone in the stadium knew they needed to recover an onside kick. The plan was for the coverage team to clear the way so SS Kam Chancellor could recover.

Matthews, a fellow former CFL-er, never thought he’d be the guy to make the recovery.

“I was trying to go block my man, he just so happened to go up and jump for the ball, and it bobbled out of his hands,” Matthews said. “I thought he caught it when he jumped up, so I was going for the tackle. It popped up and just landed on me perfectly.”