Anatomy of an epic rally — and historic collapse

Battered early and often by the Green Bay Packers, the Seahawks overcame several historical obstacles in moving on to Super Bowl XLIX. 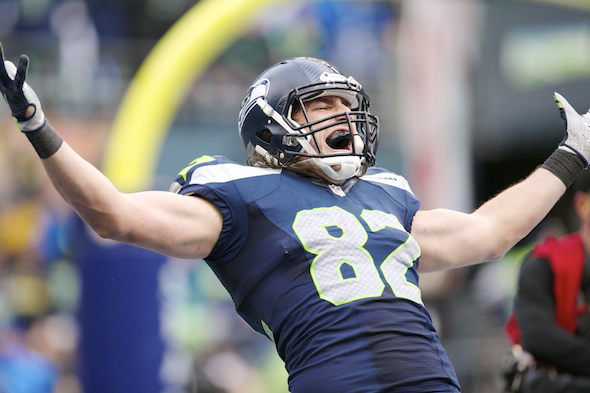 Your time is short on this planet if you witnessed Alan “The Horse” Ameche, the 1954 Heisman Trophy winner who spent six seasons (1955-60) with the Baltimore Colts. Ameche was famous for scoring the winning touchdown in overtime in the 1958 NFL Championship against the New York Giants, a game often called “the greatest ever played” – not because it was, but because it prompted network television to invest in pro football for the first time.

Not since Ameche’s one-yard, game-winning run had a conference title game, NFL or AFL, been decided by an overtime touchdown until Sunday at CenturyLink Field, where Russell Wilson, a former Wisconsin Badger (as was Ameche), threw what is now the most celebrated touchdown pass in Seattle history, a 35-yard burst of perfection to Jermaine Kearse that sent the Seahawks to Super Bowl XLIX.

Thrilling, enthralling, epic, miraculous — it was all of that. It was also, in many ways, the most unlikely victory by any team in conference championship history.

Trailing 16-0, the Seahawks needed (would you have bet on this?) to set an NFL record for the largest halftime deficit overcome in a title game to advance to the Super Bowl – and do it with a quarterback who, after two quarters, sported a 0.0 passer rating and had completed more passes to the Packers (three) than his own receivers (two).

Trailing 16-7, the Seahawks needed (would you have bet on this?) to become the first team in history to win when trailing by more than seven points at the start of the fourth quarter – and do it with a quarterback who, at that point, had a 7.0 passer rating, the worst mark in history by a quarterback who had thrown at least 20 passes.

Then the Seahawks needed Jon Ryan (would you have bet on this?) to become the first punter in championship-game history to throw a touchdown pass, not to mention throwing it to a rookie 300-pound tackle, Garry Gilliam, who had never caught an NFL pass, much less a 19-yard touchdown.

Trailing 19-7 as the two-minute warning approached, the Seahawks needed to become (would you have bet on this?) the third team history to win a postseason game after trailing by 10 or more points in the final three minutes of the fourth quarter. These three did:

A comeback would not have been possible if the Packers scored touchdowns instead of  settling for field goals on fourth-and-goal from the Seattle one-yard line twice in the first quarter. Especially with the way RB Eddie Lacy was running.

According to Elias, the Seahawks are only the third team since 1960 (Dallas, 2004; San Francisco 2013) to prevent touchdowns on two drives that reached their own one-yard line in the same game.

A comeback wouldn’t have happened without Russell Wilson’s 26-yard pass to Marshawn Lynch with 3:02 left, the key play (upon review, Lynch was ruled to have stepped out at the nine) that set up Wilson’s 1-yard TD at 2:13.

It would not have been possible without the onside kick recovery that WR Chris Matthews never should have touched. At 2:09, the Packers were one first down from sealing their sixth Super Bowl trip; all they needed to do was secure Steven Hauschka’s onside kick.

Green Bay TE Brandon Bostick was supposed to block on the play so that star WR Jordy Nelson could catch the ball. But Bostick couldn’t resist going for it. The ball slipped through his grasp, and Matthews came up with it, setting up Lynch’s 24-yard TD at 1:33.

Given Mason Crosby’s subsequent 48-yard field goal, the Seahawks would have lost without Wilson’s two-point conversion — actually a two-yard Hail Mary — to Luke Willson, who made only the third such play in postseason franchise history (Marcus Pollard from Matt Hasselbeck vs. Washington, Jan. 5, 2008; Zach Miller from Wilson at Washington, Jan. 6, 2013).

That capped a 15-point spree in 44 seconds. But Seattle still might not have won if backup QB Tarvaris Jackson had lost the overtime coin flip, which enabled Wilson to finally do his thing after delivering the worst 55 minutes of his career.

Wilson had never thrown four interceptions in any game at any level, and those four picks marked the 37th instance since 1960 in which a quarterback tossed four in a postseason game.

But leave it to Wilson, who did the equivalent of striking out five times with runners aboard before hitting a walk-off grand slam in extra innings: He is the only quarterback in the Super Bowl era (since 1966) to win a conference championship despite four or more interceptions, and only the third to win a playoff game of any kind since 1960 with four or more picks:

The Green Bay Press Gazette described the outcome as “the most devastating playoff loss in franchise history, an epic collapse,” a commentary shared by Packers right tackle T.J. Lang.

“With five minutes left in the game, there was nobody on our sideline who thought we could possibly lose,” said Lang.

The two quarterbacks had differing views on what happened.

“We gave it away,” said Aaron Rodgers.

“We took it by making plays,” said Wilson, who executed with Kearse one of the greatest plays in Seattle’s pro sports history.

Since 1995, the Edgar Martinez, franchise-saving double against the Yankees has stood as Seattle’s default greatest single play. Richard Sherman’s tip of a Colin Kaepernick pass into the end zone in the 2013 NFC Championship came to rival it. Now we have Wilson, set to become the first quarterback to start in two Super Bowls in his first three seasons, to Kearse, the first player in NFL history whose only reception in a playoff game was a TD catch in overtime.