Thiel: What if Lynch had been, uh, penalized?

Marshawn Lynch’s latest post-TD crotch grab went undetected by game officials. But imagine what would have happened had refs called a 15-yard penalty on PAT attempt. 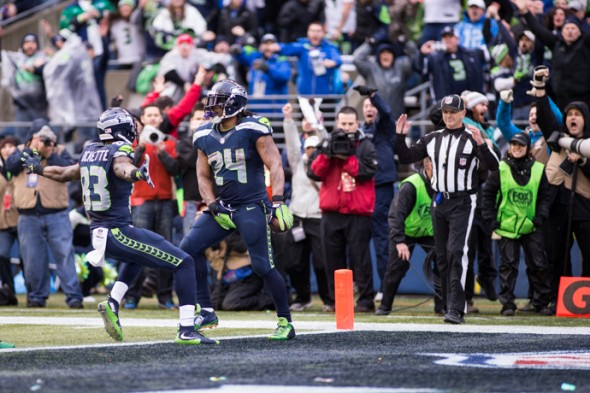 After scoring a go-ahead touchdown Sunday, Marshawn Lynch got away with something for which he was previously fined by the NFL. / Drew McKenzie, Sportspress Northwest

Lost in the civic orgasm that followed the Seahawks’ latest hailing of Mary against the Green Bay Packers — we’ll never get cheese from Wisconsin in this state again — was an episode that escaped the attention of officials:

What would have happened if RB Marshawn Lynch had been penalized for touching his personal self after his late-game touchdown gambol that put the Seahawks ahead?

At the end of a 24-yard run with 1:25 remaining in the NFC Championship, Lynch was so free of defenders that he slowed as he crossed the goal line, turned his back to the nearest official and did the by-now-traditional grab of his crotch while facing the scattered entrails of the Packers defense. The score put Seattle up 20-19 in what became a 28-22 win.

The same gesture Dec. 21 after a spectacular, 79-yard touchdown run against Arizona, in which Lynch did a backward dive into the end zone and grabbed himself mid-flight, drew a fine of $11,050 for unsportsmanlike conduct. But in both cases, no penalty was called on the field. In 2010, when Lynch introduced his personal custom at the end of the immortal “Beastquake” run, there was neither penalty nor fine.

An unsportsmanlike conduct penalty called by officials on the field typically draws a 15-yard penalty, enforced on the next play. That would have been the Seahawks’ extra-point attempt, which in this case was for a two-point conversion.

As you may recall, the Seahawks went for two and succeeded with a most unlikely pass  — a “one-in-100” play, as described by TE Luke Willson, after QB Russell Wilson’s wild scramble and jump-ball throw: The “2-yard Hail Mary.”

But a penalty would have created a 17-yard PAT attempt, with considerably higher odds against success. From two yards, the Packers defense would have to account for a rush option, but not at 17.

Without the 2-point PAT, the subsequent Packers field goal would have won the game.

If the NFL is consistent in its application of rules — no guarantee there — they will again fine Lynch, and issue a warning for a repeat violation. Given the NFL’s nanny-state culture, it seems likely they will tell Super Bowl officials to make Lynch’s behavior a “point of emphasis,” meaning a game penalty.

Meanwhile Monday, coach Pete Carroll righteously gushed over Lynch’s play — 157 yards on 25 carries and a 26-yard reception that would have been a TD except for barely stepping out of bounds.

“He had a great game,” Carroll said. “We rushed for 143 yards in the second half. He had 120, and he was just alive – ripping. It’s been an extraordinary season that he’s put out here. He’s been so consistent for so long, and he’s been so physically right for so long.

“He looked explosive again. He looked fast. His attitude is always there. He was able to take advantage of space and sometimes no space. He just would not go down. There were a couple great team finishes, when he’s driving his legs and those guys jump up off the ground and knock the pile forward and get us four or five more yards.”

Before the Super Bowl, Carroll likely will have to have another conversation with Lynch. Perhaps he will explain it with the help of rap artist MC Hammer and his hit, “Can’t Touch This.”

Carroll didn’t say much about the injuries to FS Earl Thomas and CB Richard Sherman. But NFL.com and ESPN.com reported that Thomas dislocated his left shoulder, and Sherman had a sprained elbow. But neither injury appeared to threaten their appearances in the Super Bowl Feb. 1.

After the game Sherman, who played the fourth quarter virtually one-armed, said, “I will be out there. I promise you that.” Thomas saw it as a learning experience: “It will teach me something for later in my career, how to play hurt.’’

Teams won’t release injury reports until next week, but Thomas had to go to the locker room to get a harness for his ailing shoulder.

“Both of those guys were in dire straits: ‘Could they play?’ ’’ Carroll said. “They played their hearts out. Their courage and toughness and standing up for who they are and what they mean to this team to try to finish this game, and not allow it to be any other way — it was so impressive.”

RT Justin Britt (knee) and backup SS Jeron Johnson (elbow) both sat out Sunday, but Carroll sounded as if both will be available in Phoenix.

Britt “was really close (to being able to play),’’ Carroll said. “We could have dressed him for the game, but it just felt like the right thing to do (was to make him inactive). He should be fine, but we will find out.’’

Britt, a rookie who started every game, was replaced by second-year man Alvin Bailey, who made his first start at right tackle. Johnson’s absence when Thomas was out meant DeShawn Shead, normally a cornerback, saw action Sunday at free safety.