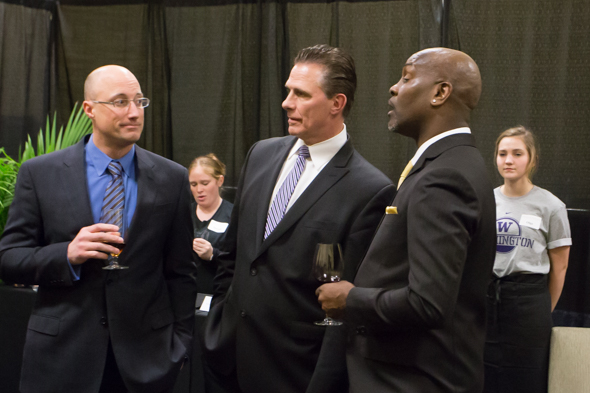 Overtime wasn’t necessary. An onside kick wasn’t needed. A fake field goal? Save it for another Sunday.

At Benaroya Hall Wednesday night, the Seahawks played it straight this time and came away conventional and convincing winners at the MTR Western Sports Star of the Year Awards.

Rightfully so, Seattle’s endearing Super Bowl-bound NFL team was saluted as the city’s Sports Story of the Year, while its fearless and pain-tolerant free safety Earl Thomas was singled out as the Male Athlete of the Year.

Hanging with the city’s pro football elite was Stephanie Verdoia, a Seattle University soccer standout and 22-goal scorer who was selected Female Athlete of the Year.

A star-studded gathering was out in force for the 80th annual event, hosted by always-irreverent ESPN sports personality Kenny Mayne and his former ESPN colleague Cindy Brunson, now with the Pac-12 Network. Both are Northwest products, from Federal Way and Tacoma, respectively.

“I saw Pearl Jam play here,” Mayne quipped. “This is a historic place.”

Mayne and Brunson shared in a skit in which they introduced two actors who supposedly were the first fans to leave the Seahawks’ game early against Green Bay and not allowed back in to witness the improbable comeback. The pair, who wore Seattle jerseys and were actually local comedians, were properly castigated.

“These are the two worst people in Seattle,” Mayne said.

Thomas, sequestered with his teammates in the two-week run-up to the Super Bowl, was the 11th Seahawks Male Athlete of the Year recipient and third in three years, joining quarterback Russell Wilson and running back Marshawn Lynch. Thomas, a three-time All-Pro selection and one of the leaders of the NFL’s best defense, sent his mother, Debbie, and younger brother, Seth, to represent him.

“Earl is at home, studying film, getting stronger in his body, preparing for the Patriots,” Debbie Thomas said.

Seth Thomas confirmed what his brother, who injured his shoulder against the Packers, has been saying since Sunday’s thrilling 28-22 overtime victory: “He’ll be playing in the Super Bowl.”

With consecutive Super Bowl appearances and a flair for the dramatic, the Seahawks, easily America’s team this week, outpolled the resurgent Mariners and Sounders, UW football All-Americas and champion UW men’s rowing and Seattle Reign teams for Sports Story of the Year.

There was no outpouring of emotion, no suffocating hugs, no sobbing for the Seahawks, rather straightforward gratitude expressed by Zorn, Seattle’s original startng quarterback. He was accompanied to the podium by Raible, one of his receiving targets.

“This staff has done a wonderful job of keeping the machine running,” Zorn said.

Verdoia led the Redhawks to a Western Athletic Conference championship and NCAA tournament berth. She was the WAC Offensive Player of the year, first-team all-conference and WAC Tournament Most Valuable Player.

“I think we are blessed to be in this place,” Verdoia said of her college town.

Receiving a lifetime achievement award, Baylor shared the podium with his former coach, Castellani, and point guard, Jim Harney, from their 1958 SU Final Four team. O’Brien introduced the Los Angeles Lakers great and served as a memory for him.

Gleason’s mother, Gail, gave a heartfelt message on behalf of her son, who was saluted for his philanthropic efforts. She said the sports kinship and resulting attention have helped him survive his disease longer than doctors projected.

Wright, who felt a little overwhelmed standing at the podium, can’t play football anymore because of his health issues. He’s a model who is considering a career as a police officer. He was feted for overcoming a major illness.

“I like what this stands for,” he said of the event.

Raible was introduced by Zorn and kidded that 33 years of carefully honing his civic reputation had gone for naught because of his ex-teammate’s words. The current Seahawks broadcaster next had an ever better observation, referencing  Sunday’s improbable comeback.

“Holy catfish, what a game!” Raible remarked, bringing an ovation.

The two-hour event concluded with big-screen highlights of –what else? — the Seahawks’ magical Sunday victory. 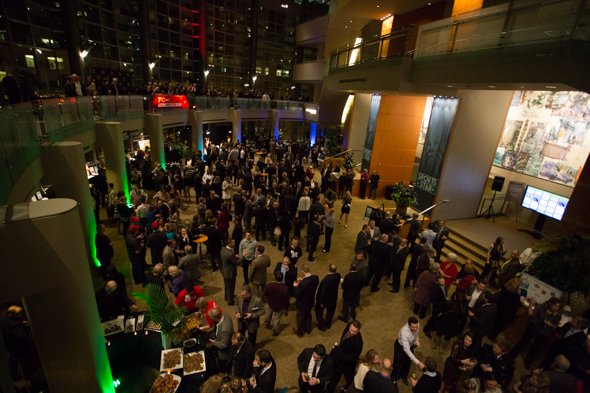 A big crowd gathered at Benaroya Hall downtown to celebrate the 80th Star of the Year. / Joe Towner