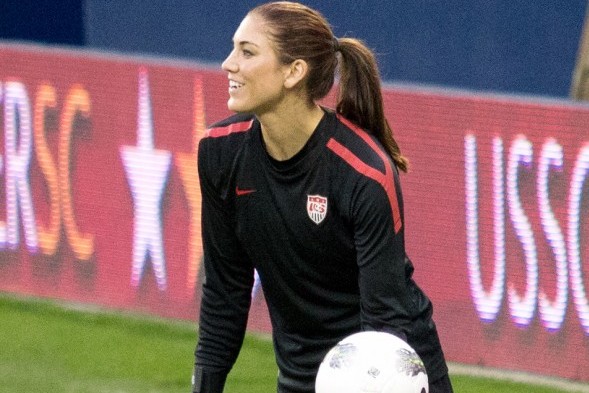 Goalkeeper Hope Solo was suspended for 30 days from the U.S. National Women’s Team by U.S. Soccer for a training-camp incident that “resulted in a negative impact on U.S. Soccer and her teammates,” according to coach Jill Ellis, who did not provide further details. Solo, a winner of two Olympic gold medals, will miss matches Feb. 8 in France and Feb. 13 in England.

The suspension of the former University of Washington star and 2008 Seattle Sports Star of the Year winner, came two days after Solo’s husband, former Huskies and Seahawks tight end Jerramy Stevens, was arrested on suspicion of driving under the influence in Manhattan Beach, CA. Solo was a passenger in the car but was not arrested or detained, although she came close, according to TMZ.

TMZ reported that Solo acted “belligerently” and pulled out her cellphone to record officers during the stop. TMZ also said that Stevens and Solo “were a major pain” and that officers were very close to arresting Solo for disorderly conduct.

A source close to women’s national team told ESPN that Solo’s suspension was the result of a combination of things, including the run-in with police. ESPN’s source also said national team officials were furious that they had to find out about the training-camp incident from a TMZ report and not directly from Solo.

“We feel at this time that it is best for her to step away from the team,” said Ellis. The national team is training in Carson, CA., in preparation for the Women’s World Cup, which starts in June.

Solo talked about her suspension on Twitter, saying, “I accept and respect the Federation’s decision. I apologize for disappointing my teammates, coaches and the Federation who have always supported me. I think it’s best for me to take a break, decompress from the stress of the last several months, and come back mentally and physically ready to positively contribute to the team.”

Earlier this month, Solo had a domestic violence charge against her dismissed. She was facing two misdemeanor counts stemming from with an altercation with her half-sister and a 17-year-old nephew at a party in June.

Solo pleaded not guilty in that case and continued to play for the national team until her court appearance.

Stevens, who has a long history of violating the law dating back to his days at Washington, is scheduled to appear in Los Angeles Superior Court in March on the DUI charge.