Thiel: Deflation, and the inflation of motivation

Middle-school boys bathroom humor aside, the Patriots are getting smacked hard with criticism. It’s fair to presume they will use it as Seahawks use external criticism: For fuel. 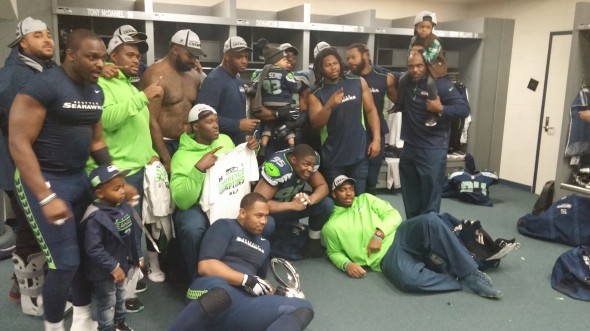 The Seahawks defense, posing Sunday with the NFC Championship trophy in the Clink locker room. Do these guys look like underdogs to you? / Art Thiel, Sportspress Northwest

Rather than discussion of a dreadnought battle between the NFL’s best, the Super Bowl run-up, filled with talk of crotch grabs and soft balls, apparently is stuck in a middle-school boys bathroom.

Then again, the Patriots and Seahawks were already engaged in a how-low-can-you-go competition to see who can manufacture enough perceived disdain to cast themselves as the disrespected, denigrated and demeaned underdog.

According to the NFL calendar, 11 days out from the Feb. 1 game is within the mandatory silly period, so apparently we’re on schedule.

In New England, Bill Belichick and Tom Brady, the best coach/quarterback tandem in NFL history, gave back-to-back press conferences Thursday in which each denied knowledge about deflating game balls in the Pats’ 45-7 win Sunday over Indy in the AFC Championship game.  Attempting to wash his hands of responsibility, Belichick went so far as to say, “ask Tom” about the doctored instruments.

For the take from Boston, here is the “Obnoxious Boston Fan” column from Globe columnist Bill Speros. For the take nationally, here is ESPN’s Keith Olbermann.

My preference is to let you choose your opinion from the insights of Speros and Olbermann, or anyone else, because I would dearly love to avoid the topic for the next fortnight. But, having covered a dozen or so Super Bowls, I know the event’s incredible vortex of insipidness is capable of sucking the majesty out of Mount Rushmore. Trembling, I will do my best, but make no promises.

Regarding consequences to the Seahawks, one possible outcome is that the Patriots might be even a tad more jacked to win, if that is possible. Because the Pats will take the outcome of this episode NFL Commissioner Roger Goodell is in the process of inventing and twist it into motivational fury.

I know this because Seahawks DT Michael Bennett said so Thursday. At least indirectly, as you will read here.

It’s what the Pats do. It’s what the Seahawks do. In fact, it’s what many, if not most, athletes do to find and maintain an edge:

I asked Bennett whether the intense effort the Seahawks put into maintaining the underdog posture, despite being defending Super Bowl champs, is really worth the effort it takes, or maybe it’s irrelevant. As Bennett is wont to do, he went long.

“You think about all that stuff. Kam (Chancellor) is a fifth-round safety. You think about me — I’m undrafted. Cliff (Avril) was in the third round. The only (Seahawks defenders) that were in the first round was Earl and Kevin (Williams) (omitted was Bruce Irvin). Guys keep that on their mind all the time.

“It’s easy to get lazy and think we’re at the top. But you have to keep going and think of something that’s keeping you looking forward. I think that’s one of the things that kept us in our position.”

There you have it — Bennett speaks the truth when he says players have to “think of something.” So ingrained it is in the jock culture, these guys would no more think of going into a game without a manufactured mad-on than they they would go in without a helmet.

It explains Sunday’s post-game blast by Baldwin at a group of reporters in a Clink tunnel when, unasked, he unloaded three em-effs in a tirade about those who mocked the Seahawks’ Super Bowl chances at 3-3 — even though probably none of those assembled (including me), could be identified as perps in the heinous deed.

Baldwin backed off Wednesday, saying if he could do it over, he would phrase it differently. But he didn’t apologize. I don’t think he needed to, but he annoyed some in the group with his remarks.  He gave reason for the assembled, many of whom were unfamiliar with him, to think he’s quite an ass.

Trash-talk between reporters and players is hardly unknown, nor usually a big deal. It is, however, an illustration of how tightly many Seahawks have hung on to the self-image  that came with their draft status, even though all logic and reason say their talents have been more than validated in Seattle.

Truth is, the Seahawks needed the 3-3 start to get where they are now. That hole wasn’t made up; it was real. But the external criticism was needed fuel. As Bennett said, reaching the top can make guys lazy.

If the 14-4 Seahawks were ever lazy, they no longer are, particularly after being down 16-0 at home Sunday.

The 14-4 Patriots, after a 45-7 win, might somehow have become lazy too. But in view of criticism of the episode already coming from some current and retired players and coaches, as well as mockers who call them Deflatriots, the players will hear claims for the next 11 days that their two most iconic figures are cheaters, liars and legacy-destroyers. The wager here is that they will no longer be lazy.

“I actually don’t think he’s that good,” Lane told reporters at his lock before practice. “He’s OK. But he does have a big body, and from what I’ve seen on tape, he don’t like your hands being put on him. So if we put our hands on him and shake him up a little bit, he won’t catch that many balls as he should.

“That’s always our key every week — put our hands on the receivers. That’s definitely an issue with him from watching tape so far.”

Gronkowski is the Pats’ top receiver with 1,124 yards and 82 catches with 12 touchdowns. Limited by a groin injury, Lane played in seven games but is healthy and was the Seahawks’ primary nickel back Sunday.

What is it about Seahawks, Super Bowls and guys named Jeremy/Jerramy? Or have you forgotten this story linked here?