Seahawks GM John Schneider, in a rare interview, says nice things about the Beast, explains (a tiny bit) about the Harvin trade and wants to keep CB Byron Maxwell. 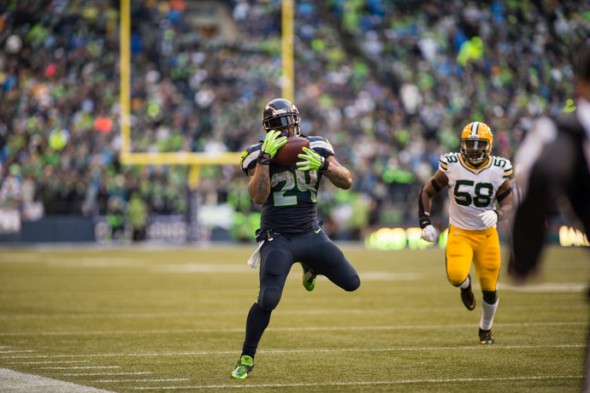 RENTON — Earlier in the season came reports that Seahawks management, regarding a holdout and fines, had grown tired of Marshawn Lynch’s act. Apparently, that is no longer the case, if it ever was, according to general manager John Schneider.

“He’s a warrior — goes out every weekend and lays it on the line,” said Schneider in a rare, spontaneous meeting with writers Friday afternoon at team headquarters. “You’d be hard-pressed to find a better running back in football.”

As to the non-playing aspects of the business for which Lynch has little tolerance, Schneider was evasive. Lynch’s anti-media stance, which already cost him a $100,000 fine, has been the subject of meetings this week among the NFL, the Seahawks and Lynch’s agent prior to the media frenzy next week of Super Bowl XLIX Feb. 1 in Glendale, AZ.

“Last year we were involved a little bit,” Schneider said of trying to get Lynch’s cooperation. Asked what he does when he has in-house sides at odds, Schneider offered a wry smile and said, “I just leave the building.”

After the laughter subsided, he said, “I can’t get into that. We have to support everyone. Whether it’s Marshawn or any other player.”

Lynch has another year left on his contract, and wants an extension. But after his eight-day holdout from training camp ended with a modestly improved contract, Lynch’s future has been a source of steady speculation, as much for his age (29 in April) and savings against the salary cap ($7 million) and his eccentric behavior.

But after his 157-yard performance Sunday against Green Bay in the NFC Championship, Lynch keeps making the case that he is driving the offense that’s reached consecutive Super Bowls.

As to the season’s other major personnel controversy, the shocking trade of WR Percy Harvin Oct. 17 to the New York Jets for a sixth-round draft pick, Schneider can have the last laugh. But he wasn’t laughing.

“We took a shot for a highly explosive player,” he said of the March 2013 trade with Minnesota that produced little for a lot. “For a number of different reasons, it didn’t work out. We knew we had to resolve that situation as quickly as we could to move forward as a football team and an organization.

“It was a very hard decision . . .  not a decision we made overnight.”

He didn’t elaborate on the reasons, such as Harvin’s fights with teammates or the reported refusal to go back into two games. Schneider did say that he was at the University of Missouri, presumably scouting, the night before the trade when then-Jets GM John Idzik, a former Seahawks executive, who had just watched his team lose 27-25 to the New England Patriots on a Thursday night game, called wanting a deal.

“We were talking to number of teams,” he said. “They got very aggressive that night.”

The deal was announced Friday to a team shocked by the news as they prepared to fly to St. Louis for a game Sunday against the Rams, who won 28-26.

“I thought everyone handled it as well as possible, especially that weekend,” he said. “As far as affecting that game, I can’t tell you. It’s always been a tough place to play. The previous game there, we won on a goal line stand.

“I’m not sure it had an effect on that game. After that, we were able to get our feet back under us.”

The Seahawks won 12 of the next 13 games, for which Schneider gave out much credit.

“The support of ownership from top down really helps with that,” he said. “We were able to communicate through the football staff, and through the whole organization, how important a decision it was, and why it’s happening.

“Pete (Carroll), as with everything he does, he was so in tune with making everything such a positive. That was s great example.”

On more current events, Schneider said the personnel staff has already had its meetings on free agency, and planned meetings in Phoenix to discuss the draft. He said the length of the season last year, plus the parade in downtown Seattle, put the staff behind.

“We found out last year we got a little behind. It was a real bummer — the Super Bowl parade got in the way of our preparation,” he said sarcastically. “We kinda got crunched last year. It felt great to have the free-agent meetings behind us before we got to playoffs.

“Not saying we did a (deleted) job last year. I’m saying we could do a better job.”

Once the Seahawks season is done, he mentioned two priorities: Re-signing CB Byron Maxwell and extending the contract of QB Russell Wilson, who has another year left on his deal, which can’t be re-opened until after the season ends.

“One of our first priorities is to talk to Maxie,” he said. “As an unrestricted guy, he’ll be highly sought after. I’d like to have the opportunity to try to re-sign him.”

“It’s really good to get (Earl) back out,” Carroll said. “It was two days of him being very uncomfortable, and it’s over now. He was back in action and in full flow today. He picks everybody up so it was great to have him back.

“Richard did everything. He took every play this week and looked fine.”

Regarding Jeremy Lane’s remark Thursday that Patriots All-Pro RobGronkowski “wasn’t all that good,” Carroll had a ready retort.

“Jeremy,” he said, “just hadn’t watched the film yet.”

Regarding Deflate-gate that is haunting the Patriots after their AFC championship win, Carroll said it is of zero matter to the Seahawks.

“It’s a big deal for them,” he said. “I know they’re dealing with it. It isn’t for us at all. It has no bearing on anything.”

The Seahawks are inviting fans to gather along the bus route from Renton’s VMAC to Sea-Tac airport Sunday for the flight to Phoenix. The 1.1 mile route in the city of SeaTac is on South 188th Street starting at 46th Avenue South towards 28th Avenue South.  In order to ensure fan safety, barricades will be set up along the S. 188th route with signage to direct fans to approved viewing areas. Fans are encouraged to bring 12 flags, signs and loud voices to demonstrate support as the team buses pass . . . At 8:30 a.m., the state patrol will  close I-5 exit 152 (188th Street and Orillia north and southbound).  There will be no stopping, exiting or access to 188th from I-5 and both directions of S. 188th Street from Military Road to International Blvd. which will be closed.