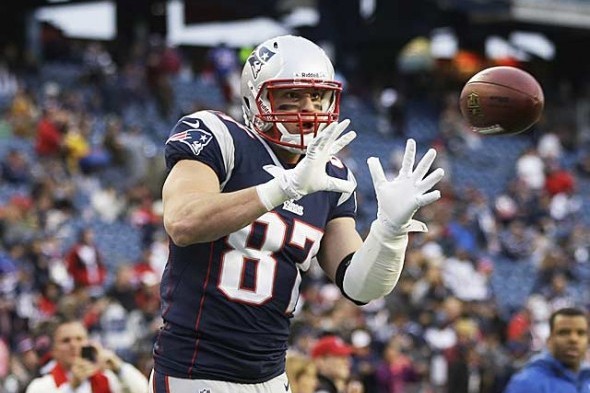 In a week dominated by Deflategate and Seahawks RB Marshawn Lynch’s on-going cash drain for crotch-grabbing and non-talking, Seattle nickel cornerback Jeremy Lane, in a burst of Emerald City swagger, contributed a headline of his own that appeared on all major sports web sites. It said, “Seahawks’ Lane: Gronkowski not that good.” A fourth-year pro out of Northwest State (LA.), Lane apparently possesses knowledge no one else does.

Gronkowski entered the NFL in 2010 as a second-round pick out of Arizona and has three Pro Bowl selections and three first-team All-Pro designations in his portfolio. He’s scored 54 touchdowns in five seasons, a span in which no other tight end targeted fewer than 500 times has scored more than 40 (Antonio Gates). Gronkowski’s 14.22 yards per reception over the same stretch is also No. 1. Comparison: Future Hall of Famer Jason Witten of the Cowboys is at 10.80.

Not persuaded by such evidence, Lane delivered the first provocation for Super Bowl XLIX when a trap door opened on his forehead and a little wild cuckoo sprang out and said of Gronkowski:

“I actually don’t think he’s that good. He’s OK. He does have a big body. But from what I’ve seen on tape, he doesn’t like you putting your hands on him. So if we put our hands on him and shake him up a little bit, he won’t catch that many balls.”

Gronkowski didn’t bite, taking the high road when asked what he thought of Lane’s tongue-wagging.

“Everyone’s entitled to their own opinion,” Gronkowski said. “It is what it is. They’ve got a great defense overall. We’ve got to be worried about their whole defense. We’ve got to be sure we practice hard, prepare hard all week so we’re ready to roll.”

Gronkowski has been rolling since he joined the Patriots. In the modern history of the NFL (since 1960), the following are the only tight ends to catch at least 60 passes, produce 1,000 or more yards and score at least 10 touchdowns in a season. Before he opines again, Jeremy Lane should be clued in that Gronkowski is the only TE to do this twice, and that he’s already had two seasons that top the best year ever by Kellen Winslow, a Hall of Famer:

The Patriots often line up Gronkowski in the slot, which means Lane could be isolated against him on occasion. New England will take – and love — that matchup: Gronkowski is 6-foot-6 and 260 pounds, Lane 6-0 and 190.

“I’m good no matter who’s lined up there,” Lane bloviated. “But (the Patriots) try to do things like line a bunch of ineligible guys out there to get you confused. We have a plan for it.”

Specifically, defensive coordinator Dan Quinn has a plan for it, but is far more respectful of Gronkowski than Lane.

“He’s a terrific tight end,” said Quinn. “I think he’s a unique guy in the run game, the pass game, and with his catching radius. I think at the end of it, he just has great hands to finish routes. So when he’s up in the air, generally he’s strong-handed enough to come down with it. So those are a few things that impress us about him and why we regard him so highly.”

Quinn’s Seahawks sport the No. 1-ranked defense and this year led in fewest points and yards allowed for the second season in a row. But if they are vulnerable anywhere, it’s stopping tight ends – not a comforting thought with Gronkowski due up next at University of Phoenix Stadium a week from Sunday.

The Seahawks allowed 17 touchdown passes this season, one more than they permitted in 2013. Of the 17, 11 were tallied by tight ends, including three by Antonio Gates in a 30-21 Week 2 loss at San Diego.

Four other teams allowed as many or more scoring catches by tight ends, but no club allowed a higher percentage of TD passes to tight ends than the Seahawks. The number isn’t even close (TDs=total touchdown passes allowed; TEs=TDs by opponent tight ends):

LB Bobby Wagner was a rookie in 2012 when the Seahawks last had to deal with Gronkowski, who had six catches on eight targets for 61 yards and no touchdowns in a 24-23 loss at CenturyLink Field. Wagner’s assessment:

“The Patriots definitely present a deep threat. Julian Edelman does a good job, especially on third down, getting open, getting the first downs and stuff like that. I think you definitely have to pay a lot of attention to Gronk (Gronkowski). He opens those guys up, because everybody pays so much attention to him. But I feel like we have the athletes to match up very well with them.”

Obviously, so does Jeremy Lane. But from now until the Super Bowl kickoff, he is advised to keep his wild cuckoo in mute mode.