Thiel: If Kraft trusted Carroll, much is different

More alike than they are different, Belichick and Carroll both were hired by Patriots owner Robert Kraft, who gave Belichick the trust he never gave Carroll. 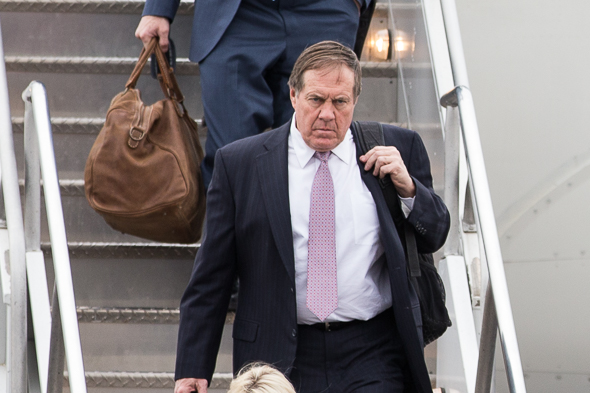 There is no truth to the rumor that upon seeing the great stone face of Bill Belichick, the runway at Sky Harbor airport rolled up. / Drew McKenzie, Sportspress Northwest

PHOENIX — The coaches who meet Sunday in Glendale in a much-anticipated Super Bowl matchup are easy to clown up as opposites, as in Emperor Palpatine vs. Yoda.  But the Patriots’ Bill Belichick and the Seahawks’ Pete Carroll couldn’t be more alike than if they started out in the same zygote.

They are so similar that both were run out of NFL head coaching jobs in the 1990s by owners and fans fans that thought them utterly unfit for the rigors.

They are so similar that the same owner, Robert Kraft, hired each to coach his team, Carroll in 1997 and Belichick in 2000.

They are so similar that Carroll proudly cited a statistic this week that the Patriots and Seahawks, over the past three seasons, are tied for the NFL lead in turnover margin, at plus-51. The next best team was plus-28.

But in order for Kraft to hire Belichick, he had to fire Carroll, and therein lies an NFL story of light-wave-bending irony.

If the Seahawks win Sunday, Carroll, 63, will have achieved aircraft-carrier-sized vindication. He’ll never use the term, but Carroll was crushed that his upbeat, positive style was judged twice wrong in the NFL, in New York and Boston. He will have beaten his personality opposite in Belichick, 62, the brusque intimidator with whom he shares nearly all football values and a similar success rate.

With consecutive Super Bowl triumphs, Carroll will have proven there is another way, because he will have won the NFL after having won college football at USC with a different style of handling people.

Instead of a detour to college ball, he could have stayed winning in the NFL if Kraft had understood: If he had trusted Carroll as he ended up trusting Belichick, the landscape of pro and college football would have changed.

Carroll long ago forgave, but there is no forgetting. After the Pats clobbered the Indianapolis Colts 45-7 to win the AFC Championship two weeks ago, he called Kraft to congratulate him.

“In calling him,” Carroll said this week, “it was just a matter of just checking in with him and saying, ‘Hey, didn’t know if we would bump into each other here but I wanted to make sure to say hello.’ So, it’s been fine.

“I wouldn’t say the first couple weeks (after his 1997 firing) were real heated up and fun and all that. But Robert has been very gracious throughout the time. I’ve tried to return that to him. I think we’ve remained in a good relationship and it’s been very consistent.”

Classic Carroll — turning a negative into a positive. And if helps Carroll’s reflection of his tenure, Kraft also failed to understand Carroll’s predecessor, NFL coaching giant Bill Parcells. If Kraft hadn’t pushed Parcells out, there would have been no vacancy for Carroll.

In his fifth year in New England in 1996, Parcells, along with former Washington State star Drew Bledsoe at quarterback, took the Pats to the Super Bowl. After an earlier eight-year tenure (1983-90) as New York Giants head coach that resulted in two Super Bowl wins, Parcells figured he had earned the right, as he famously said at the time, to be allowed to “shop for the groceries” in compiling a roster.

He wanted full control of the Pats’ football operation — as Carroll now has in Seattle.

Back then, Kraft said no. After months of franchise tension and a 35-21 Super Bowl loss to a Green Bay team coached by Mike Holmgren, Parcells asked out, to take the head coaching job with the New York Jets. In a deal brokered by then-commissioner Paul Tagliabue, Kraft agreed to release Parcells from his contract in exchange for four draft choices.

Kraft hired Carroll, who previously washed out in a single year (1994) with the Jets, then had to appease an outraged fan base as well as many team veterans who were in love with Parcells. Following him was virtually a dead man’s job. Carroll had seasons of 10-6, 9-7 and 8-8,  going 1-2 in the playoffs, which was hardly bad but not enough for players used to the abrasive, demanding style of Parcells.

Carroll was fired, replaced by Belichick, an assistant coach under Parcells for six years with the Giants and his equal in intimidation. Old school was back, and all of New England rejoiced.

Fifteen years later, Belichick gained from Kraft what was denied Parcells and Carroll, full control, and turned it into the NFL’s best record over that time  — a 165-75 regular-season mark with 14 division championships, six Super Bowl appearances and three championships.

But before that, Belichick had to endure his own NFL stumble.

In his first go-round as a head coach, he had five seasons (1991-95) with the Cleveland Browns and went 36-44, with one winning season and one playoff game win. Upon his firing, one Cleveland columnist called him “the village idiot.”

Carroll and Belichick, dumped on early and redeemed, are the apex of the industry. Many see Carroll’s exuberance and Belichick’s apparent perpetual look of constipation, and draw the wrong conclusions.

“There are a lot more similarities between the two guys than there are differences,” Bledsoe, who quarterbacked the Pats until Tom Brady usurped him in 2001, told ESPN radio this week. “The differences are purely stylistic, but the substance is very, very similar. Pete, you watch his press conferences and hear the way he talks, and I think people could have the impression that he’s this happy-go-lucky, kind of crazy guy. But Pete’s got an edge to him. I played for him, I’ve seen it.

“The thing that the two coaches do is they create a culture of intense competition on the field in practice. They both make sure their players know there’s no free lunch. There are guys looking for your position at all times.”

Former Seahawks CB Brandon Browner, signed away in free agency by the Patriots, has a similar experience that is more recent.

“Bill, he’s old school,” he said this week. “Pete is a great guy, he keeps it looser. On our way to walking into meeting rooms in Seattle you could hear music blasting. None of that is going on in New England. It’s all business-oriented.

“But I love playing for both coaches. I grew up with hard-nosed coaches from Pop Warner to high school. That’s what I’m used to, and it brought back a little structure to my game.”

It never seems like it when the anvil hits between the eyes, but Carroll and Belichick were better off for the early career turmoil.

“You know, there were a lot of days back in those years when, man, I was just winging it and trying to do the best I could in figuring it out,” Carroll said. “As everybody does when you get your first job opportunities and your first challenges, you can only go with what you got. Sometimes you do the right thing and sometimes you don’t.

“Hopefully, you make the good choices in your direction so you demonstrate more closely the person that you’d like to be.”

Brothers tied at the football soul and split at the personality, Carroll and Belichick will have it out Sunday, large men on a large stage. No one is winging it now.