Thiel: With Seahawks, valet parkers can be kings

New DE Landon Cohen was running a valet service in Spartanburg, SC., a month ago, now he’s in the Super Bowl. The Seahawks always work the margins for talent. 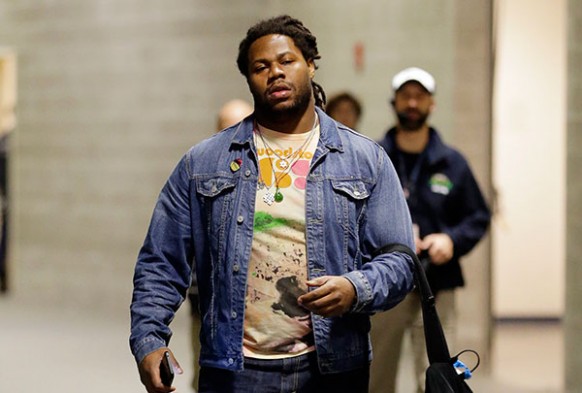 DE Landon Cohen is another find for the Seahawks that helps patch a hole in the defensive line. / Seahawks.com

PHOENIX — Less than a month ago, one of the key participants in the Seahawks’ crucial goal-line stands in the NFC Championship against Green Bay was in Spartanburg, S.C., working his valet parking business.

“Guys get out of their cars, they don’t have their suit jacket on yet, so I take it off the hanger and put it on them,” Landon Cohen said last week in the Seahawks locker room. “Then they find out, ‘Oh my gosh, this guy plays football too.’

“I get a lot of gratification out of serving people.”

Sunday Cohen, 28, will serve the Seahawks at backup defensive end in the Super Bowl, with his un-pedigreed resume (7th round pick, 216th overall, now on his sixth team) nevertheless representative of the finds that general manager John Schneider and his scouting staff are making, and need to continue to make, to get to consecutive NFL championships.

On its 53-man roster, the Seahawks have 22 undrafted free agents, which doesn’t include Cohen, since Detroit took him with the Lions’ final pick in the 2008 draft out of Ohio University of the Mid American Conference.

You probably know about the Seahawks’ high-profile UDFAs, such as Doug Baldwin and Jermaine Kearse, who have made cottage industries out of telling everyone how disrespected they are by the NFL mainstream. But the hire of Cohen represents a new frontier of obscurity, particularly given the timing.

He fits the Seahawks’ talent profile as if hand-drawn by Carroll: Physically talented, bright, hard-working but largely underappreciated because he doesn’t fit an NFL position stereotype.

At 6-1 and 280, he’s smallish, but very quick, for his position. As is Russell Wilson at quarterback. In fact, the under-appreciated are a central theme in the match.

Wilson and Patriots quarterback Tom Brady, a sixth-round pick from Michigan, are the best evidence yet for the college draft being as wrong as it is right. The Seahawks didn’t invent the art of the obscure find, but they have mastered its execution.

“Just because guys come in unheralded doesn’t mean that’s a forever statement,” Carroll said Sunday upon arrival. “I think it’s an opportunity for guys in our league, and our team in particular, to compete to show who they are and what they are, regardless of how they arrived. We’ve been real proud of that. Russell is a great statement about that, as well as Tom.”

In his own way, so his Cohen. He wasn’t even in the league in 2012 and 2014. He played the 2013 season in Chicago, but the Bears didn’t re-sign him. He was in Buffalo’s training camp, but they cut him just before the regular season. He did not play a single down anywhere in the regular season.

But after injuries wiped out the seasons for two Seahawks defensive linemen, Brandon Mebane and Jordan Hill, the Seahawks rang up Cohen in his Spartanburg hometown, asked if he was still in shape, and signed him Jan. 5.

He played against Carolina and Green Bay, his 41st and 42nd career games.

“I went to the gym every day and worked out,” Cohen said. “You just wait for something to happen. It just happened to be the Seattle Seahawks. And I’m grateful.”

After three weeks in Renton, he can testify to the complete buy-in that happens in Seattle under Carroll that speeds the transition for newcomers, of which there are 15 to this year’s Super Bowl roster.

“I’ve never been on a team where everybody has the same goal,” he said. “It is somethin’ else, man. You can’t help but get on board.”

Carroll’s ability to push the right buttons, in an upbeat atmosphere free of house politics such as owner’s pets or heavyweight contracts that determine playing time, became immediately apparent to Cohen.

“Coach Carroll is really good speaker,” he said. “I write down things he says because I want to go back and share with people at my company; bring what he says to my hometown. Some of the things we do around here, I can see doing with the guys.”

The guys back at the company he owns, The Valet LLC, aren’t getting any secrets.

“Once you figure out the secret, someone gonna change the lock on you,” he said, smiling. ” I don’t know what the secret is.

“I just know that for every little kid playing football, the Super Bowl is the pinnacle of American football. What I’m going to to do is attempt to be present in every moment, in every meeting, and just embrace whatever goes on around it. Same for the game.”

Whether Cohen has a future in Seattle or the NFL isn’t knowable. But he will have some epic stories to tell as he he helps people with their jackets.

“When I get home I’ll probably have an event to work,” he said. “Fine by me. Hopefully, (the Super Bowl) is good for business. Hopefully, people understand it’s not what I do, but why I do. I’m into service, making some money while serving our community and making lives a little easier.”

The comedy-drama of the Super Bowl is rich with stories of controversy, bombast and silliness. But the narrative of Landon Cohen, and the Seahawks’ success in the margins of human resources,  is worthy too.

“I don’t tell customers I’m a football player, but they usually find out,” he said. “The dynamic usually changes. They want to take pictures with me.

If the Seahawks win with Cohen’s help, he’ll have a side business — Selfies and Hugs, LLC.