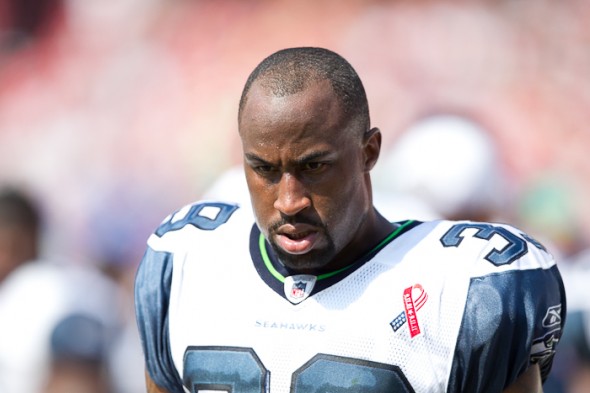 In the NFC title game, Sherman sprained his elbow and Thomas dislocated his shoulder.

“Those dudes are tough, like watching the game you see Sherman was holding that arm like he had a sling on it,” Browner said. “But at the end of the day, this is about the Super Bowl. I’m going to tell my teammates to go hit that elbow, go hit that shoulder. Try to break it if you can, you know?”

Having spent 2011-13 in Seattle, Browner is a former member of the Legion of Boom. But last season, he had to watch the Seahawks win Super Bowl XLVIII rather than play, after being suspended during the regular season for repeatedly violating the league’s substance abuse policy.

In the interview with ESPN’s Josina Anderson, Browner said watching from home as the Seahawks crushed the Broncos, 43-8, was “the worst feeling ever.”

In March 2014, Browner signed a three-year, $17 million deal with the Patriots and has since stayed out of trouble while putting up middling numbers. In his first season with New England, the 30-year-old has one interception and 25 tackles playing in a secondary that finished the regular season with more interceptions (16) than the Seahawks (13).

“He’s still an LOB member,” Sherman said. “It’ll be fun. I’m sure he’ll find the same joy in playing us as we will in playing him. It’s like playing your brothers — you play against your brothers, it’s going to be a fun game. At the end of the day, you hug, shake hands and we’ll hang out this offseason. But this 60 minutes will be a fun battle and joy to play.”

Despite the fighting words, Browner sounded a similar note.

“You’re going to be my best friend after the game,” Browner said. “But at the end of the day I know you want the Super Bowl just as bad as me.”

“I would expect nothing less,” Baldwin said. “This is the Super Bowl. What do you expect? I understand the fans want it to be classy, said publicly, and everything to be said politically correct, but that is the truth of the matter.

Golden Tate had 99 catches and 1,331 receiving yards this season, both career highs.

He helped the Detroit Lions finish the regular season 11-5 and made his first Pro Bowl. If not for a controversial no-call in Detroit’s 24-20 wild card round loss to the Cowboys, he probably would have played the Seahawks at CenturyLink Field in the NFC divisional round.

That hasn’t kept Tate from thinking about what it would be like to still be with the Seahawks, apparently.

“There’s a little envy,” Tate said Sunday, according to the Detroit Free Press. “I wish I could be there. I could have stayed there, but I got to put my family first and make it so my kids can go to college and my kids can do some things. I think I made the right decision and I like where the Lions are headed, anyway.”

A second-round pick out of Notre Dame in 2010, Tate spent his first four NFL seasons in Seattle before signing a five-year, $31 million contract, including $13.25 million guaranteed, with the Lions in March.

Last season in the Seahawks’ run-first offense, he led the team with 64 catches and 898 receiving yards. He was later offered a deal to stay in Seattle, which he described as “laughable,” before leaving the Emerald City to play in Detroit’s pass-heavy attack.

Hey, 12s in Phoenix, need to start pre-funking the day before the Super Bowl?

The Seahawks will hold a “12fest” Saturday at Chase Field, home park of the Arizona Diamondbacks. Admission is free and the gates open at 1:30 p.m.

Among those attending: Seahawks owner Paul Allen, members of the Ring of Honor, alumni, Sea Gals cheerleaders, the Blue Thunder drumline, Seahawks mascots “Blitz” and “BOOM” and other special guests. A popular Phoenix-based band, The Walkens, will play covers of classic rock hits.

There will also be a beer garden and concessions, interactive games and an opportunity to take pictures with Taima, the club’s augur hawk. The event ends at 4 p.m.

Since there is no public parking near Chase Field, fans are encouraged to use public transportation or the light rail.