The mockery Marshawn Lynch makes of NFL media policy is sufficiently foolish to seek an amendment to the collective bargaining agreement: An exemption called designated mute. 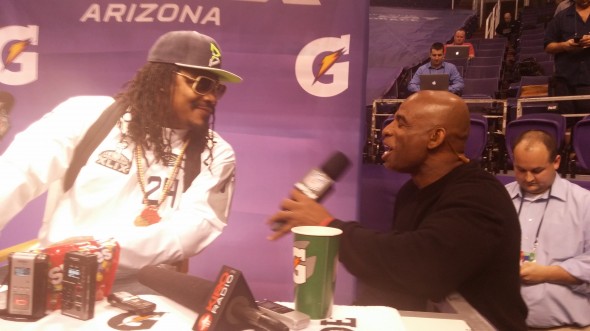 “This is one of the most fun parts of the situation,” he said. This is cool.”

As it should be for players. Say what you will about the absurdity of the event — as I and thousands of other journalists have for nearly the entirety of its 49-year existence — the staggering attention garnered for feats at the pinnacle of American sports should be fun for the players. At the least.

For Marshawn Lynch, it is not. Yet he has manipulated his disdain for interviews into his own cottage industry, spinning off a parody commercial for his favorite candy, Skittles.

By repeating Tuesday for five minutes the same non-answer answer to any question — “I’m just here to avoid a fine,” he said 29 times — he has figured a way to do the mandatory minimum that avoids a fine as high as $500,000, while sticking hard to a mostly senseless position that even some of his otherwise-adoring teammates think is foolish.

To people not invested emotionally in Lynch’s football success, he looks like a jerk. The situation makes the NFL look ineffectual. His union looks lame. And to the members of the media for whom the slight is intended, some laugh, some condemn and some wonder, like me, why does this situation persist unresolved?

But rather than join the complainers, I propose a solution.

Amend the collective bargaining agreement between the NFL and the union to create a new category: Designated mute.

Make the classification applicable to not one but three players per team, chosen by the team and a player representative at the beginning of each season. The three are exempt from the current collectively bargained agreement to cooperate with media.

Some players may be willing to fight to be so designated, but that is a secondary consideration to the primary purpose:

To relieve an obligation that a few players, such as Seahawks LG James Carpenter, with which he genuinely is uncomfortable (anyone else out there shun public speaking, hmmm?), or, as with Lynch, are conscientious objectors.

That is Lynch’s stance. He is not shy, has no anxiety disorder or other condition that armchair psychologists post about on blogs, nor is he unfriendly or stupid. His main issue is, as coach Pete Carroll put it last summer, “Marshawn does not like to be told what to do.”

Who does? But Lynch is among those rarest of people whose actions speak well for themselves. As he told, semi-immortally, NFL Networks schmoozer-in-residence Deion Sanders a year ago at the same event in New York: “I’m all ’bout that action, boss.”

Annually designating three players off-limits takes pressure off players, coaches, front office, NFL and media. Nobody loses. How about that?

Sure, it would be nice to have Lynch talk, because in the times when he has spoken, he has often proven funny, irreverent and wise. His words have weight with teammates, although they sometimes require interpretation, as also often happens with shamans, oracles, prophets and mystics whose meanings are not plain and direct.

Carroll, whose dealings with Lynch, particularly around the time of his preseason holdout when he sought more money, have been tense on occasion, does not let that obscure the bigger picture.

“I just know that Marshawn is an extraordinary character,” he said Tuesday at his podium. “He is the most giving, the most loyal, one of the great teammates that you can want on a team because of the way he takes care and looks after people.

“He’s got a remarkable sense about that. His sense for loyalty runs extraordinarily deep. His teammates know that.”

Obviously, Lynch has no such sense for media members he doesn’t know. That’s OK. The best he can do for us is not waste our time. Presumably, that goes for him too.

But I spent an hour staked out at his podium just to verify that he would do what everyone expected — a one-sentence filibuster repeated for as long as it took to get to the five-minute requirement.

At one point, a woman reporter / model / whatever handed him a bag of Skittles. He smiled and nodded in her direction.

“You sexy,” he said. There you have it — the one moment he went off-script. Otherwise, he was as disciplined in words as he was with his deeds at running back: Patience, followed by an abrupt burst through an opening.

Make Lynch a designated mute, along with a couple of teammates. Make it so for every team. Unless the NFL and the union really think this new Super Bowl tradition is worth keeping in a time when Facebook, Twitter and Instagram are how Lynch and many others connect with fans.

It was another football oracle from another era, former Seahawks coach Chuck Knox, who said it best: “Your actions speak so loudly I have no need to hear your words.” 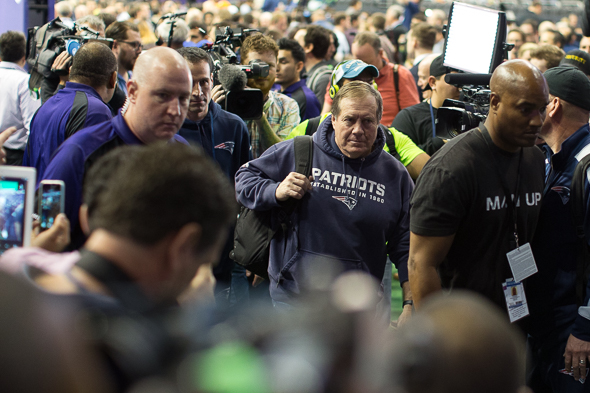