RB LeGarrette Blount was atypically outspoken for a Patriots player on Super Bowl Media Day. But he has a right to be confident. 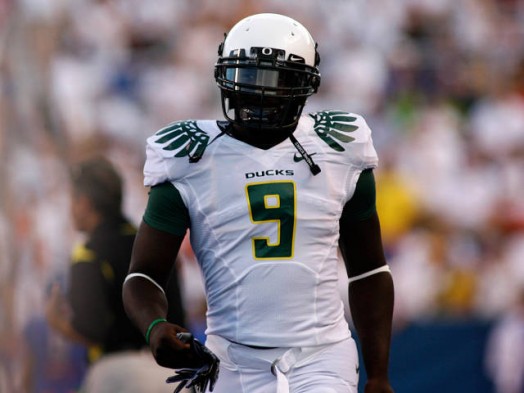 Patriots RB LeGarrette Blount, a former star at the University of Oregon, doesn’t care what sort of defense he is playing against. / Goducks.com

For an organization notorious for having players keep their opinions to themselves, Blount’s comments were as close as New England came to giving the Seahawks bulletin-board material for Sunday’s matchup.

Seattle’s defense ranked No. 1 in the NFL the past three seasons in points allowed, joining the famed “Purple People Eaters” Minnesota Vikings (1969-71) and the Cleveland Browns, who led the league from 1953-57. They also became the fourth team in NFL history to lead the league in points and yards allowed in back-to-back seasons and the first to do it since the Chicago Bears in 1985-86.

Blount, who spent two turbulent seasons at the University of Oregon, did admit Tuesday the Seahawks have “a pretty good defense,” and described Marshawn Lynch as “probably one of the best running backs in the league.”

“Just the fact that they trusted me enough to carry the ball that many times and put the game in my hands, it means a lot,” he said.

Blount was with the Pittsburgh Steelers for the first 11 games of the 2014 regular season until being released in November after he left the field early in a win over the Titans. He was reportedly upset about losing carries to second-year RB Le’Veon Bell. Suddenly without a team, Blount then signed a contract with the Patriots, whom he played for in 2013.

“They knew that I could run the football,” Blount said. “They know that I can effective with it. They know that I have big-play potential. They like my style of running and I fit in perfectly with this offense. It was a perfect match.”