Thiel: Browner the odd man in at Super Bowl

Ex-Seahawk pulled back from his harsh words toward Sherman and Thomas. But the Seahawks are happy to see him — in only nine games, he tied for the NFL lead in penalties. 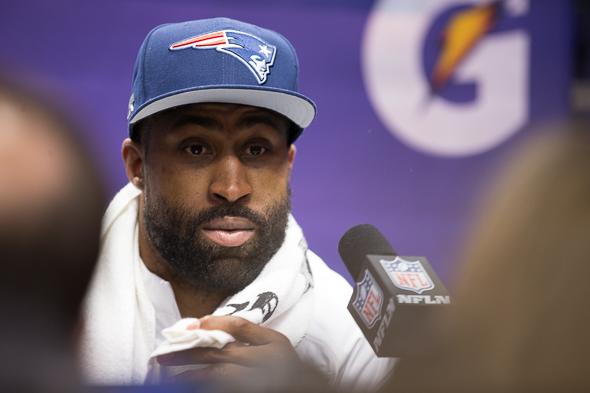 Brandon Browner, now of the Patriots, seems to stir it up wherever he goes. / Drew McKenzie, Sportspress Northwest

PHOENIX — Amid talk of purported advantage gained by using deflated footballs, the New England Patriots have a starter who has been twice suspended by the NFL for drug rules violations, including the first four games of the 2014 regular season.

But in all the chatter regarding the sports ethics of the Pats, no one has offered a scolding for their hire of CB Brandon Browner.

Maybe that’s because he played for the Seahawks too. He’s America’s Cheater.

Only at the Super Bowl can a two-time violator of drug rules be overshadowed by an equipment malfunction. We can’t be surprised — this is the 11th anniversary of a wardrobe malfunction that scandalized a Super Bowl with a runaway nipple.

For a guy who figured to be lower profile this week than Patriots’ ball boys, Browner drew further scrutiny Monday when his harsh remarks upon arrival here Monday about his former  teammates’ injuries — in the NFC Championship, FS Earl Thomas dislocated his shoulder, and CB Richard Sherman strained an elbow — sent eyebrows cocking.

“At the end of the day, this is about the Super Bowl,” Browner said. “I’m going to tell my teammates to go hit that elbow, go hit that shoulder. Try to break it if you can, you know?”

By Tuesday, after his remarks went global, Browner backed off, saying his former teammates were his brothers and he wasn’t coming “from a dark place in my heart . . . You know how I feel about those guys. It seemed the right thing to say at the time.”

Thomas and Sherman dismissed the apparent advocacy of targeting as Browner merely being competitive. But LB K.J. Wright saw it differently.

“I didn’t know he said that, but we don’t play like that,” Wright said. “We don’t go out there and try to hurt guys. And I don’t care if they do have an injury. We’re not going out there trying to hurt people, and especially guys you’re close to. If he said that, it’s fine, but that’s not our main focus.”

The discussion can be dismissed as pre-game rhetorical excess. But Browner, a Seahawk from 2011-13 and co-founder of the Legion of Boom, who also contributed misdeeds that gave his team the nickname “SeAdderall Seahawks,” seems to be a magnet for trouble the way Seahawks RB Marshawn Lynch is a magnet for NFL fines.

Coaches tend to dislike the issuance of pre-game threats because it almost always puts referees on alert for mayhem by the perpetrator. It’s especially true with Browner, who comes into the Super Bowl one of the game’s more remarkable individual stats — despite playing in only nine games for the Pats, he tied for the NFL regular-season lead in penalties with 14, including six pass interference calls and five for defensive holding.

Since Darrelle Revis, a Sherman-caliber All-Pro, occupies the other corner spot, you can figure the Seahawks have a big circle drawn on the game-plan video around Browner. Talk about targeting . . .

Browner, a Los Angeles-area native and Oregon State grad, spent six years in the Canadian Football League. His 6-foot-4 frame brought him to the attention of Pete Carroll, who saw his ideal CB prototype. He was a Pro Bowl selection in 2011, but drew a suspension in 2012 for what was reported to be the banned stimulant Adderall.

Then on Dec. 18, 2013, a story broke that he was suspended for violation of the NFL’s street-drug rules, believed at the time to have been a third strike in the NFL’s drug policy that called for a one-year suspension. His abrupt absence from a Super Bowl-contending team was seen as a blow. But backup CB Byron Maxwell came on strong in his big opportunity.

Browner eventually had his Seahawks sentence reduced to the final two regular season games and all three playoff games. He had to sit at home and watch the Seahawks dismember the Broncos in the Super Bowl 43-8.

“The worst feeling ever,” he said of missing out on the party in New York. It grew worse because the Seahawks let Browner go into free agency. Partly it was his age, now 30, and partly it was his potential salary — the Pats signed him for three years for a potential $17 million — but it was also partly the aggravation of dealing with his problems after Maxwell proved nearly his equal. Plus his punishment included a ban from the first four games of 2015.

This week, Carroll, as he is wont to do, was remembering all the sunshine and none of the pain.

“Brandon was really one of the core guys for us,” he said. “We loved what he did. He contributed to the mindset and growth of the group. If you’ll notice our guys, they’ll talk about him with an endearing manner. They really care about him.

“He was there at the start of it all. To me, it’s a really cool story because we knew about him all the way back in his high school days. Seeing him come through and do well, it was a shame that we weren’t able to maintain it, but that’s kind of how this thing goes sometimes. You don’t always get to do it with the guys you want to. It’ll be really fun to be on the field with him.”

Carroll will never say so, but part of the fun will be taking advantage of what the Seahawks know about Browner’s weaknesses. After Browner’s first big penalty, perhaps the TV camera will catch Carroll’s grin on the sidelines.