Big-play Seahawks ‘toxic’ when it counts most

Former Ravens coach Brian Billick conjured up a stat called Toxic Differential, and no team had a higher number than the Seahawks, who take on New England Sunday. 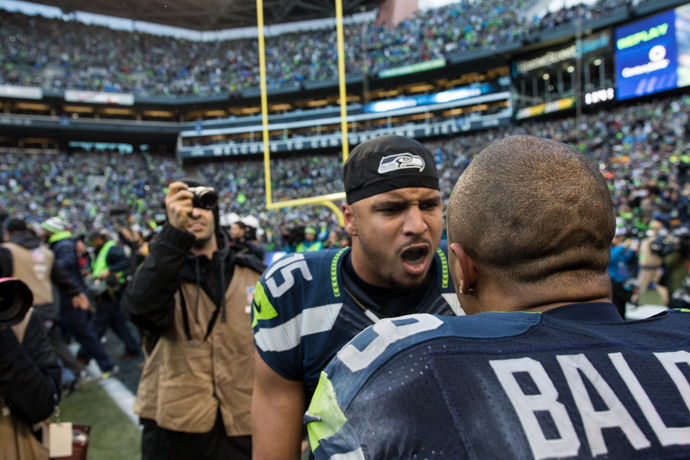 Given that it’s impossible to predict turnovers or big plays, most experts/analysts have settled on a Super Bowl storyline that suggests the Seahawks will only beat New England Sunday if they receive an A+ game from Marshawn Lynch. Why? Because Russell Wilson, not a big numbers quarterback anyway, is not going to be able to throw effectively against Patriots. Truth is, few QBs have.

In the AFC Championship game two weeks ago, the Patriots held Andrew Luck to 12 completions in 33 throws (36.3 percent), prevented him from throwing a touchdown, picked him off twice and sent him back to Indianapolis for the duration of winter with a 23.0 passer rating. So distraught was Luck that he nearly pulled out of the Pro Bowl due to, as one story reported, “frustration” and “embarrassment.”

Thus the thinking that Tom Brady, statistically the greatest playoff quarterback in history, is bound to enjoy more success throwing against Seattle than Wilson will have against New England, which features a former Legion of Boom member in Brandon Browner and cornerback Darrelle Revis, a six-time Pro Bowler and four-time first-team All-Pro.

Despite the pre-game storyline, it’s impossible to say what will happen Sunday. But what has happened might provide a clue.

Brian Billick is an analyst on the NFL Network. After a long career as a college coach, he spent 15 years in the NFL, notably with the Baltimore Ravens as their head coach from 1999-07 (his 2000 Ravens won Super Bowl XXXV). Before that, Billick coached tight ends and served as offensive coordinator in Minnesota (1992-98), where he developed his signature stat, “Toxic Differential.”

“It’s not merely good enough to avoid turning the ball over,” Billick explained. “You have to generate big offensive plays as well.”

The higher the Toxic Differential the better, and this was the difference between the Seahawks and Patriots during the 2014 season:

Not much separated the Seahawks (+10) and Patriots (+12) in turnover differential. They both ranked among NFL leaders (Green Bay at +14 finished No. 1).

With Marshawn Lynch and Russell Wilson combining for 68 of Seattle’s 83 big rushing plays (35 by Lynch, 33 by Wilson), the Seahawks demonstrated that they are more apt to pop an explosive gainer than the Patriots, who had 41 10+-yard runs. The Patriots are also more likely to cede a big run, having been burned 44 times.

According to Pro Football Focus, Wilson had 52 throws during the regular season that targeted a receiver at least 20 yards downfield. He completed 21 for 733 yards and five touchdowns. How that compared to Brady (completion percentage includes dropped passes):

Given how the Seahawks run their offense through Lynch, Wilson will usually lose a sheer- numbers battle with an opposing quarterback. He doesn’t flay teams with a thousand cuts as Brady does, but is just as capable of making the explosive play when the opportunity presents.

If the Seahawks win, Wilson will improve to 11-0 (regular and postseason) against quarterbacks who have won Super Bowls.