Instead of non-answer answers, Seahawks RB Marshawn Lynch politely lectured media for two minutes before shutting down the notion that he would answer questions. 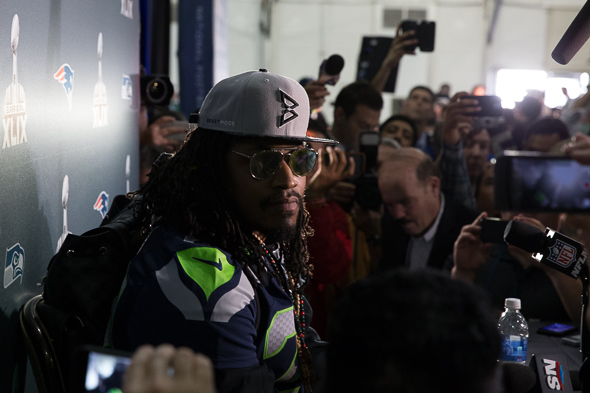 Forced by the NFL to meet with reporters for the third day in a row, Seahawks RB Marshawn Lynch opened his Thursday session with a statement but continued to ignore most questions. / Drew McKenzie, Sportspress Northwest

Seahawks RB Marshawn Lynch finally opened up Thursday in his NFL-mandated media session, expressing frustration over why he is being forced to speak with reporters when he feels he has nothing to say.

It was the third day in a row Lynch made himself available after the NFL, citing the collective bargaining agreement, reportedly threatened to fine Lynch $500,000 fine if he didn’t cooperate.

During Tuesday’s Media Day, Lynch repeatedly said “I’m just here so I won’t get fined.” Wednesday, the phrase du jour was, “You know why I’m here.”

In his final interview of the week before the Seahawks meet the Patriots in Super Bowl XLIX, Lynch began with an opening statement that was more of a lecture, before sidestepping questions, then departing when he reached the mandatory minimum five minutes.

He again wore a hat and sunglasses from his recently launched “Beast Mode” clothing line, which could draw a fine for violating the league’s apparel policy.

“Hey, look, all week, I done told y’all what’s up and for some reason y’all continue to come back,” Lynch said at the team’s hotel. “You do the same that y’all did. I don’t know what story you are trying to get out of me. I don’t know what image y’all are trying to portray of me. But it don’t matter what y’all think, what y’all say about me. Because when I go home at night, the same people I look in the face — my family — that I love, that’s all that really matters to me. So y’all can go and make up whatever y’all want to make up because I don’t say enough to put anything out on me.

“But I’ll come to y’all’s event (media briefings) and you can shove cameras and microphones down my throat. And when I’m at home in my environment, I don’t see y’all. But y’all are mad at me. And if y’all ain’t mad at me, then what y’all here for? I ain’t got nothing for y’all, though. I told you all that. So y’all should know that. But y’all will sit here like right now and continue to do the same thing. I’m here preparing for a game and y’all want to ask me all these questions, which is understandable. I can be down with that.

Pressed by reporters, Lynch gave shout-outs to teammates, his Family First Foundation, Oakland, CA, his hometown, and to “real Africans.”

Here’s a link to Lynch’s full interview on Seahawks.com