Thiel: Goodell needs to learn to talk like Lynch

In annual state of the NFL presser, NFL cmmish was devoid, as usual, of meaning or sincerity. Maybe he should get help from a more honest speaker — Marshawn Lynch. 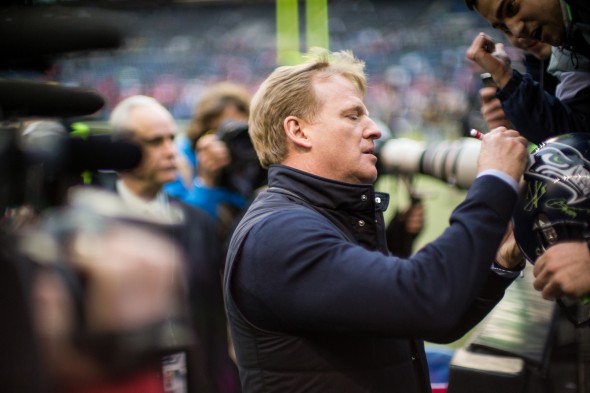 Roger Goodell, here at the NFC Championship a year ago at the Clink, is not signing as many autographs this year. / Drew McKenzie, Sportspress Northwest

PHOENIX — You may have heard or read that NFL commissioner Roger Goodell had his annual Dancing with the Questions event Friday at the Super Bowl media center downtown. In keeping with tradition, he dodged, dissembled and prevaricated regarding the various controversies over the past season.

It was the same sort of feeling that attended the three pressers that Seahawks RB Marshawn Lynch didn’t have this week — except for the Thursday episode when broke his discipline and offered a statement of dismay before shutting down.

Agree or disagree with his points, Lynch certainly sounded sincere about how he felt. In a Super Bowl week that is a veritable desert when in comes to honest expression, Lynch bloomed for two minutes like a cactus flower.

It occurred to me that we would all have been more satisfied had Goodell answered some of the questions Friday with the same sincerity, and the same words, Lynch did Thursday during his scold of media.

Here’s some of the questions from Friday’s presser, and Lynch’s responses from Thursday.

“I’m here preparing for a game and y’all want to ask me all these questions, which is understandable. I can be down with that.”

Q: Richard Sherman said this week that you should be available to media as frequently as the players are obligated to talk to media. Would you do that?

Goodell: “Hey, look, I done told y’all what’s up, and for some reason, y’all continue to come back.”

Q: Many people in America, going through the kind of year that you’ve had, probably would have resigned or been fired. Can you envision circumstances in which you think you could lose your job?

Q: After the year  you had, do you think you deserve a pay cut?

Goodell: “Y’all can go and make up whatever y’all want to make up because I don’t say enough to put anything out on me.”

Q. A lot of the (NFL controversies) have in common a conflict of interest. When you do something like hire an outside investigator like Ted Wells into the Patriots investigation, you’re still paying him, and Robert Kraft, who owns the Patriots, is still paying you. So, even when you do everything right in one of those situations, it opens you guys up to a credibility gap with some of the public and even with some of your most high-profile players. What steps can you guys take in the future to mitigate some of those conflict-of-interest issues?

Goodell: Y’all are mad at me. And if y’all ain’t mad at me, then what y’all here for? . . . It don’t matter what y’all think, what y’all say about me. Because when I go home at night, the same people I look in the face — my family — that I love, that’s all that really matters to me.”

Q: Richard Sherman alluded to possible favoritism on your part toward owners, specifically Robert Kraft, and GQ magazine even quoted a league executive calling him the “assistant commissioner.” How do you react to this allegation, and will you avoid having your picture taken at owners’ houses before any future conference championship games?

Goodell: “I’ll come to y’all’s event and you can shove cameras and microphones down my throat. And when I’m at home in my environment, I don’t see y’all.”

Q: When (Saints coach) Sean Payton was suspended from Bountygate (2012), you said, when he said he was unaware, that ignorance is no excuse. Will the same standards apply as you said, to the ‘integrity of the game,’ when you complete your investigation on these footballs and if they were deflated by anybody, will the same standards hold true for Bill Belichick?

Q. Robert Kraft said that he felt that you and your office owed him an apology if nothing came out of the Wells investigation. What are your thoughts on that matter?

Goodell: “I ain’t got nothing for y’all.”

Q. What’s your take on how Marshawn Lynch handled the media this week and has your office made a decision whether he’ll be fined for lack of participation or for wearing a non-licensed hat?

Goodell: “For this next three minutes, I’ll just be looking at y’all the way y’all are looking at me. Thank you.”

Q. You made a series of proposals in early 2008 in the aftermath of the Spygate penalties regarding future competitive violations. You wrote then of increased penalties and also a lower threshold in terms of the standard of proof, and then the owners ratified those. Have those standards come up in any case since then? Do you consider them, particularly a lower burden of proof, to be in effect as you move forward in investigating this case?

Goodell: “I done talked. All of my requirements are fulfilled.”

Lynch’s answers were direct and honest, and no less illuminating than Goodell, who has the politician’s gift (curse?) of using many words to say nothing.

In his actual answer to the question about envisioning circumstances that could cost him his job, Goodell was at his aggravating best/worst. Earlier in the year, he admitted he blew it with the weak initial punishment for Baltimore RB Ray Rice for striking his then-fiance in a hotel elevator.

Friday, he managed to sound as if he was a bit of a collateral victim.

“It has been a tough year, a tough year on me personally,” he said. “It’s been a year of humility and learning. We obviously as an organization have gone through adversity, but more importantly, it’s been adversity for me. That is something we take seriously.

“It’s an opportunity for us to get better, it’s an opportunity for our organization to get better, so we’ve all done lot of soul-searching, starting with yours truly. We have taken action. A lot of the concerns that we had back in August where we didn’t have a policy to address a very complex issue (domestic violence) — we didn’t have answers for that. We didn’t fully understand those issues. Well, now we have experts in the field, they’re in our office, they’re helping us understand this.”

It’s nice that he owned up to his failure, but what came of all that soul-searching would have been worth sharing. Instead, we hear that the NFL did what it always does — throw money at the problem by hiring consultants.

An “opportunity” to get better means . . . what? When it comes to beating women, a committee report doesn’t quite convey sincerity of conviction among the rich, old white men who run the show. It’s a flashback to Mitt Romney in 2012 trying to relate to anyone outside of Bain Capital.

Experts are in the office. Really?

Ironically, Goodell seems to convey that he can relate better to Lynch than we imagined.

He sounded as if he were there so he won’t get fined.