Are the Seahawks breaking the rules on purpose? One ESPN columnist believes being oft-penalized works to Seattle’s advantage. 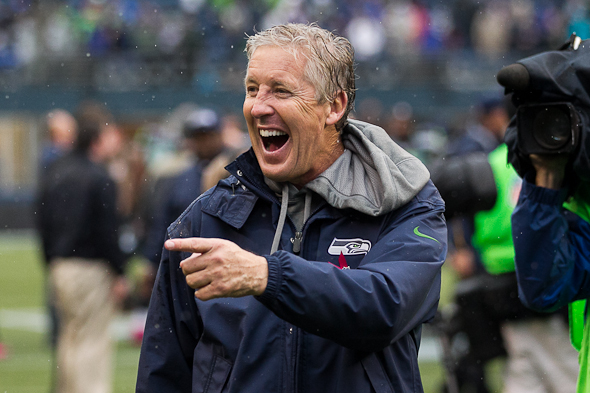 Seahawks coach Pete Carroll believes in a style of play that pushes the limits of the NFL rulebook./ Drew Sellers, Sportspress Northwest

As talk continues to swirl about whether the Patriots knowingly deflated footballs before thumping the Indianapolis Colts, 45-7, in the AFC championship game, ESPN senior writer David Fleming chimed in Thursday with a column sure to irk even the most subdued of 12’s.

The gist of his article: The Seahawks are good because they completely disregard the NFL rulebook.

The best team in the league has been penalized so many times (416) in the last three seasons that I’m pretty sure the fluorescent yellow trim on the Seahawks uniforms is actually just residue from all the penalty flags. Still, Seattle’s success isn’t in spite of all the penalties. It’s inspired by it. Without anyone really noticing, Seattle has created a blossoming dynasty in the most competitive league in the world by completely, and brilliantly, turning the stigma of penalty flags upside down; embracing infractions rather than avoiding them at all costs.

In 18 games, Fleming points out, the Seahawks drew an NFL-leading 144 penalties while opponents earned 80, almost a 2-1 ratio. The 3-13 Jaguars led the league in fewest penalties during the regular season, with 73.

Fleming argues that the Seahawks make a conscious effort to play hyper-aggressive and ignore the rules to successfully impose their will on opponents.

What about the pre-snap penalties?

There’s a reason for those, too, according to Fleming:

The Seahawks have run more than 1,000 plays this season. For argument’s sake, let’s say they’ve started all of those plays on offense a micro-second early or an inch or two closer to their opponent, but only got caught 33 times. That means the Seahawks have had a jump on their opponents on 97 percent of their offensive plays. All it did was cost them 165 yards in penalties, total, or 2 percent of their total production. Of course it’s not that cut-and-dried. After all, the shame and punishment of 33 false starts caused the Seahawks to fall all the way to No. 1 in rushing.

In other words, they’ve made officials useless by exploiting a loophole. If a defensive back holds every time, as Fleming believes the Seahawks did in 2013 before the NFL made a rule change, an official can’t call it every time. It would make games too long and boring. If DT Michael Bennett lines up offsides and is penalized five yards, it’s worth it for Seattle when he does it, isn’t penalized and records a sack.

To Fleming, Seattle’s willingness to break the rules so consistently made the Seahawks defense more dominant and the refs less influential.

Inside “Law & Order: NFL,” the Seahawks have found a way to make penalty flags meaningless while rendering the ultimate authority of officials little more than an illusion.

In particular, Belichick was impressed with the sustained effort level Seattle is able to command. As a reference, he used the Seahawks’ comeback win over the Packers in the NFC title game.

“Everybody just competes at such a high level for every single second that they’re out there,’’ Belichick said. “I think that’s a great credit to Pete and his staff. The players they brought in there, they’re just relentless in the way that they play. Any coach wants his team to play that way.

“I think that Seattle and Pete really are the model for that. They do a better job than anybody.”

FiveThirtyEight at a loss

The advanced analytics site, fivethirtyeight.com, proclaimed Friday that Super Bowl XLIX will be the second strongest Super Bowl matchup since the 1970 AFC-NFC merger, according to their Elo ratings.

But according to their data, great matchups on paper (tablet?) don’t always result in great games, as they go on to cite past Super Bowls when supposedly evenly matched teams played a lopsided game.

As of Friday, the Seahawks were two-point underdogs, according to sports betting site, Bovada.

We wouldn’t say to expect a bad Super Bowl on Sunday… It’s probably a fluke that the games that looked best on paper turned out to be among the worst on the field.

But that’s the point: Any one game won’t tell you all that much, and as we’ve pointed out before, an NFL matchup that looks just about even beforehand is only slightly more likely than average to result in a great game. This could be a super Super Bowl — but it could just as easily turn out to be a dud, in which case Deflate-gate and Katy Perry will burn an SEO-optimized hole into our collective memories.