With two commercials, three real interviews and his words quoted by Katy Perry and Tiger Woods, The Beast has become a media monster. Because he doesn’t like to talk. 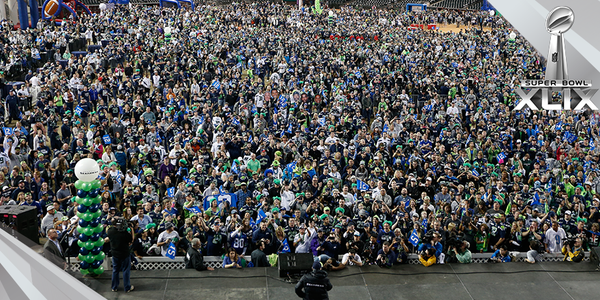 The 12s showed up 25,000 strong at Chase Field in downtown Phoenix Saturday. / Seahawks.com

PHOENIX — For a guy claiming to shun attention, Seahawks RB Marshawn Lynch has won Super Bowl week with Elvis-style hysteria for his words, deeds and general bad-ass deportment. It’s his world, and we’re just renting a room in the back. He’s thrown shade over the Patriots, Seahawks, Roger Goodell and even the fabled weather, which has been itself mostly shade.

So let’s explode a myth right here: Lynch is neither shy nor a reluctant interview. Beyond appearing naked in ESPN The Magazine earlier this year, he gave individual interviews this week to si.com, Maxim and NFL.com’s Mike Silver, a longtime resident of Oakland, Lynch’s hometown, who also attended his college, Cal.

Lynch became a viral video sensation with his skit with TV comedian Conan O’Brien and Pats TE Rob Gronkowski. Funny as the video was, Lynch is even more hilarious in this vid of outtakes from the original.

His reps arranged this week to have a pop-up store in a mall in nearby Scottsdale, which sold out its inventory of Lynch’s new Beast Mode line of clothing. He released two amusing new video commercials that endorsed Skittles and Progressive Insurance, the latter with ESPN’s Kenny Mayne of Kent and Jefferson High School.

Even when he doesn’t answer questions, he says things that turn into national memes. During press conferences here, halftime entertainer Katy Perry and golfer Tiger Woods quoted him from his Tuesday media day session: “I’m just here so I don’t get fined.” In the case of Woods, who was in his first tourney of the year at the Phoenix Open, he wasn’t kidding. He missed the cut.

ESPN.com reported that according to data gathered by Twitter, Lynch was mentioned in about 35,000 tweets in December 2013, compared to 68,000 for Dallas’s DeMarco Murray, 115,000 for Philadelphia’s LeSean McCoy and 158,000 for  Kansas City’s Jamaal Charles. In December 2014, Lynch was mentioned 366,000 times. Over the past month, Lynch’s name has appeared in 2,199 news stories, according to LexisNexis, about 500 more than the same period last year.

And of course, he has re-popularized the crotch grab, which now can be witnessed when drivers complete the filling of gas tanks, or late-arriving kids get the school bus to stop after its departure.

As a national pop-culture phenomenon, Lynch has arrived.

If he comes close to repeating his NFC Championship production of a career-high 157 yards in a Seahawks win, Beacon Plumbing may get enough business to re-pipe the nation.

“He’s a lot smarter than what people think,” said WR Doug Baldwin this week. “He is very wise, very wise.”

If you’re a Beast Mode fan, or just a fan of irony and chaos, you have to want to see a Seahawks win just so Lynch can be handed the trophy from Goodell, whose office has fined Lynch more than $131,000 and counting.

As a conscientious objector to the group interview as well as to league policy that has so often punished him, Lynch’s individual success potentially could provide the most diabolically awkward post-Super Bowl moment since Pete Rozelle presented the Lombardi Trophy in 1982 to nemesis Al Davis, with whom he had feuded for years. Rozelle cleverly kept both hands on the trophy so neither was available to shake the outlaw Raiders owner’s hand after the 27-10  win over Philly.

The man of allegedly few words will be heard nationally like no athlete in Seattle history.

Although the Sunday game forecast is for sunny and 70, much of the week has been sloppy damp, like about 28 days of any January in Seattle. So few were surprised when an estimated 25,000 fans ignored the drizzle to show up Saturday afternoon to a free celebration at Chase Field downtown, the Diamondbacks’ ballpark that closed its roof.

Owner Paul Allen and DE Greg Scruggs, on the injured reserve list, were among those who saluted the fan support in Phoenix, where the supporters of the Patriots, judging anecdotally by watching the crowds on the streets, have been overwhelmed, much as the Broncos fans were in New York the past year.

Amazing to see how many Seahawks fans are out here. Might be the most lopsided I’ve seen it in last 15 Super Bowls.

No way to know how many of the 12s for the Chase Field event had tickets. But if they were planning to buy on the secondary market, the price has never been more dear. This week the face value of tickets — ranging from $800 to $1,900 — was dwarfed by prices that briefly exceeded $10,000, by far the highest in Super Bowl history.

As of midday Saturday the NFL Ticket Exchange, the league’s official ticket re-sale website, didn’t have tickets for less than $9,000, the Associated Press reported. The cheapest ticket on StubHub was nearly the same. One listing on Craigslist in Phoenix was selling tickets for $8,000 each with the seller willing to meet the buyer at their bank to complete the transaction.

Pete Carroll’s record when he has had extra time to prepare (bowl games, season openers, post-bye weeks, etc.) shows only a single loss, the BCS so-called national championship in 2006 when USC lost to Texas and Vince Young, 41-38. Ask the Broncos about the preparation of the Seattle defense.

In the 10 Super Bowls which the No. 1 regular-season defense has appeared, its team won nine times, the only miss being in the strike-shortened 1982 season.

Quote of the week

Seahawks DE Michael Bennett: “I love my wife’s booty. She has the best butt of all time.”

Considering all, the Seahawks won the week here in the desert, about 100-3. Now for the game. 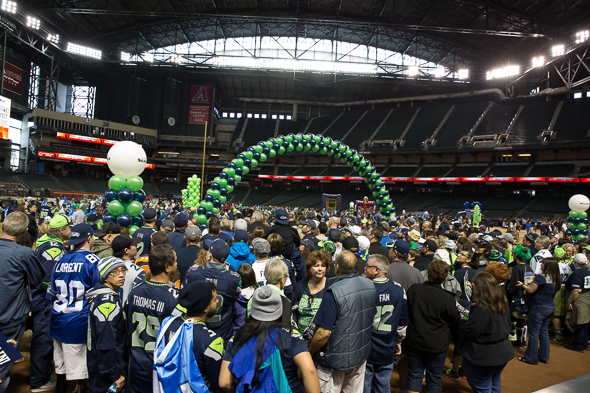 Thousands came in out of the rain to enclosed Chase Field Sunday in downtown Phoenix. / Drew McKenzie, Sportspress Northwest