The Seahawks were one yard away from defeating the New England Patriots in Super Bowl XLIX, but called a dubious pass play at the goal line that cost them a chance at victory. 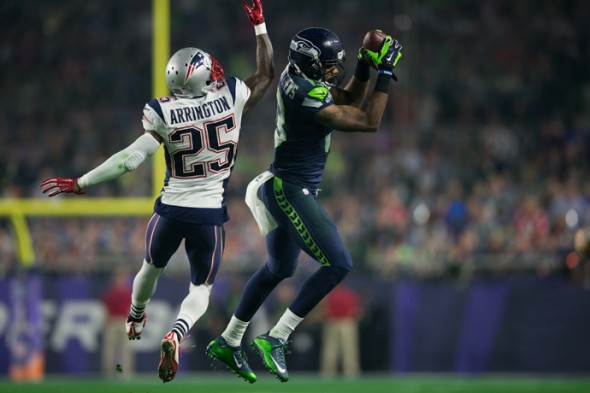 Never at a loss for words, Pete Carroll probably won’t live long enough to explain adequately why, with a victory in Super Bowl XLIX one, tantalizing yard away and Marshawn Lynch poised to ram in the game-winning touchdown with less than a minute to go, the Seahawks opted instead to have Russell Wilson throw a pick play to Ricardo Lockette at the goal line.

It made little sense in the moment, and likely never will given Lynch’s red-zone history. Malcolm Butler, a free agent rookie out of West Alabama who minutes earlier failed to prevent Jermaine Kearse from making an absurd, juggling catch at the five-yard line that should have set up the winning touchdown, stepped in front of Lockette and swiped Wilson’s pass on the goal line, ending Seattle’s reign as Super Bowl champions.

Instead of a parade-making 31-28 win, the Seahawks lost 28-24 to a New England team that seemed resigned to defeat.

The Seahawks, who squandered a 24-14 fourth-quarter lead and fell behind 28-24 with 2:02 to play when Tom Brady threw his third touchdown to give New England a 28-24 lead, nearly pulled off a stunning comeback in the final two minutes.

Wilson lofted a 31-yard completion to Marshawn Lynch just before the two-minute warning that gave Seattle a first down at the New England 49. After two incomplete passes and facing a third-and-10, Wilson hit Lockette for 11 yards and a first down at the Patriots 38.

Wilson threw deep to Kearse, who was covered by Butler. The ball was batted and kicked, and finally fell to a prone Kearse, who juggled it twice before improbably hauling it in on his back for a first down at the five-yard line.

Lynch, who finished with 102 rushing yards, burst four yards to the one, putting the Seahawks a yard away from inclusion in a conversation about the greatest teams in the free-agency era. Seemed a lock. Seattle faced second down with a half a minute to play and still had a timeout.

The time seemed ripe for Beast Mode, but Carroll and OC Darrell Bevell thought otherwise and instructed Wilson to throw a slant. Instead of winning the Super Bowl with a walk-off play, the Seahawks trudged out of University of Phoenix Stadium a stunned and improbable loser.

“We didn’t want to run against their goal line group right there,” explained Carroll. “So we called the play, and it was just a miraculous play that the kid (Butler) made. That’s my fault totally. We had plenty of time to win the game. We were playing for third and fourth down and it just didn’t work out. I hate that we have to live with that. We did everything right to win that game.”

“The guy (Butler) just made a heckuva play,” said cornerback Richard Sherman. “We gave ourselves a chance to win at the end and that’s all you can ask for. Give New England credit. They earned the win.”

Brady threw four touchdown passes, but had to overcome two interceptions to nail down his fourth Super Bowl title. He staked New England to a 7-0 lead with an 11-yard pass to Brandon LaFell and then Lynch tied it with a three-yard run.

Brady tossed a 27-yard touchdown pass to Rob Gronkowski with 31 seconds left in the second quarter, but Wilson took the Seahawks 80 yards in 29 seconds just before halftime and pulled the Seahawks even at 14-14 with an 11-yard pass to Chris Matthews.

Carroll/Bevell made a gusty call on that play. With six seconds left before intermission, the Seahawks could have settled for a field goal, but they elected to take a shot in the end zone and Matthews beat Kyle Arrington for the touchdown.

Seattle went up 17-14 on Steven Hauschka’s 27-yard field goal at 11:09 of the third quarter. Wilson’s second TD pass, to Doug Baldwin, gave the Seahawks a 24-14 lead entering the fourth quarter.

But the Seahawks couldn’t hold down Brady, who directed a 68-yard drive that ended with a four-yard TD to Danny Amendola, pulling New England within 24-21 with 7:55 to play.

Seattle then went three-and-out quickly, a fatal possession as it turned out, giving Brady another chance. He made the most of it, directing a 64-yard scoring drive that ended with his three-yard TD to Julian Edelman.

Had Seattle won, the MVP might have been free agent Chris Matthews, who recovered the onside kick in the NFC Championship game against Green Bay. Matthews had played only 26 snaps in his career before Sunday, had never caught an NFL pass and had never even been targeted. But he came up with four receptions for 109 yards and a touchdown. Matthews’ 44-yard catch set up Lynch’s touchdown and his 45-yard snag set up Hauschka’s field goal.

Wilson had an odd day. He became the first starting quarterback not to throw a pass in the first quarter of a Super Bowl and had a hard time getting untracked. He was only 4 of 7 at halftime, largely because his receivers couldn’t get open, but finished with 247 yards, two touchdowns and a 110.6 passer rating. But it was small consolation.

“We played as hard as we could but they made one more play than we did,” said Wilson. “It’s tough to process. I hate losing. I’ve watched a lot of Super Bowls and that was one of the better ones, but we just didn’t win it.”

Wilson absolved Carroll of blame and took responsibility for his goal-line interception that prevented Seattle from becoming the first team in 10 years to repeat as Super Bowl champion.

“Coach took the blame, but I put it on me,” said Wilson. “I should have made the play. I gave them the ball. ”