Belichick alerted Malcolm Butler, who blew it in practice, on the final, fateful play that crushed the Seahawks’ bid for a second consecutive Super Bowl win. 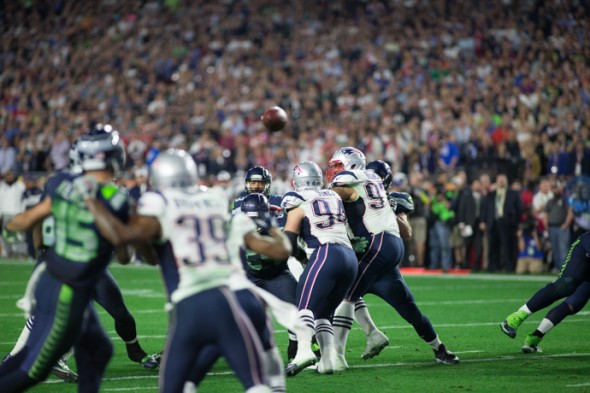 Russell Wilson releases the final pass of the season, picked off by Malcolm Brown, whose arm is visible in front of the Pats’ Brandon Browner (39). / Drew McKenzie, Sportspress Northwest

GLENDALE, AZ. — Many of the players and coaches were showered, dressed and on the buses. Equipment had been loaded. Shirtless and wordless on their stools, Richard Sherman and Earl Thomas still had on game pants and the thousand-mile stares of defeated men. Seconds passed. No words or movements.

Thomas, the most emotionally volatile of the Seahawks, looked so forlorn that Sherman, who was at angle to his friend, searched his face for clues about what to say. The moment was rare, because Sherman offered nothing.

For a team that, save for one, can talk chrome off a trailer hitch, the silence screamed.

The Seahawks, a team that so often finds ways to win close games, including the NFC Championship two weeks ago, found a way to lose one so devastating that it will be recited in a thousand years in Seattle and the nation whenever someone needs a metaphor for sports agony.

“An inch too far,” said Seahawks QB Russell Wilson of his ill-fated pass that was intercepted. A yard too short, when considering RB Marshawn Lynch on the previous play gained four yards on first-and-goal from the five-yard line with 20 seconds left. And one trip too many to the well expecting the same outcome and finding someone smarter in the way.

That would be Patriots coach Bill Belichick, who won the game Tuesday in practice. Yes, we all know that New England’s 28-24 win Sunday at University of Phoenix Stadium will be etched in Super Bowl history as the game that coach Pete Carroll screwed up with a pass-play call that should have been a handoff to Lynch, which sheep herders in Mongolia  knew would have been a second consecutive Super Bowl win and ascension to sporting Valhalla.

More on that later. First, Tuesday with Bill at practice.

At least as intense in his opponent studies as Carroll, Belichick had his backups run the play the Seahawks would use in the seminal moment of the season, a bunch right formation in which receivers Jermaine Kearse and the ill-fated Ricardo Lockette would break into different routes designed to rub a defender off Lockette on a slant to free him for an easy touchdown reception.

In the Pats’ practice, scout team QB Jimmy Garoppolo fired a TD pass to wide receiver Josh Boyce, just as the Seahawks would intend. The victim Tuesday was Malcolm Butler, a rookie reserve cornerback from a school called West Alabama.

“Bill told me they were going to run it (in the game),” Butler said. “He got into me real good.”

Belichick knew the play would come. But likely he didn’t anticipate it in a goal-line situation where the defense has some advantage in tight quarters with the game on the line.

But it didn’t matter what Belichick thought then. His earlier chewing out of Butler did the job. Plus, moments earlier, Butler was the defender on Kearse when the Seahawks receiver came down on his back with the ball after it hit off three parts of his body at the 5-yard line.

“I felt like the game was on me,” Butler said.

But no one can say now that the Pats didn’t know it was coming. That was the decisive element in the play call.

As Carroll and offensive coordinator Darrell Bevell explained it, at second-and-goal from the 1-yard line, they wanted to score with little or no time left, a longtime Carroll strategic staple that cuts off the opponent’s longshot chance at a big kickoff return or a Hail Mary.

They knew they had the best back in the game. Lynch had run for 102 yards on 24 carries. And the Pats were in a goal-line defense. But if he scored on the next play, 15 or 16 seconds would be left for Pats QB Tom Brady, the game’s Most Valuable Player. So Bevell called a pass play practiced and used numerous times.

“It would either be a touchdown or an incompletion,” Bevell said, “and we still had two more downs and a timeout.”

But Lockette was the least experienced among the three receivers. Bevell said Lockette “could have done a better job at staying strong through the ball. But the kid from New England made a great play.”

Made easier because he and Belichick knew it was coming.

“I just told (Wilson), ‘Make sure and throw it in there,'” Carroll said. “We’ll run on third and fourth down.”

The strategy had some logic. But any pass play in such close quarters that isn’t a fade route to the edge of the end zone is subject to a higher chance of batting, tipping — or picking.

And a slant to Lockette isn’t a high-percentage move on a fastball from Wilson.

The Seahawks made a game full of bold decisions, including a risky pass to rookie WR Chris Matthews with two seconds left in the first half for an 11-yard touchdown to tie the game at 14.

But in the final moment, audacity did not serve them.  They took a chance on a pass play known to Belichick and Butler, ignoring a much more secure option. They paid for it with the game, and an episode that, no matter how hard they rationalize otherwise, will be on the coaches.

As LB Bruce Irvin put it, “I don’t understand how you don’t give it to the best back in the league on not even the 1-yard line.”

“I take full responsibility; it’s my fault,” he said, in the automatic tone of a ship’s captain. That was good that he owned it, but he knows enough sports history to know that the play will permanently scar his otherwise remarkable legacy.

And enhance the legacy of the man across the way, Belichick, who was one play smarter in a splendid clash of titans in the desert.

And please, somebody explain it to Thomas before he spontaneously combusts.