The Seahawks had plenty of reasons for calling the play they called, but their decision has already been deemed the worst in Super Bowl history. That won’t change. 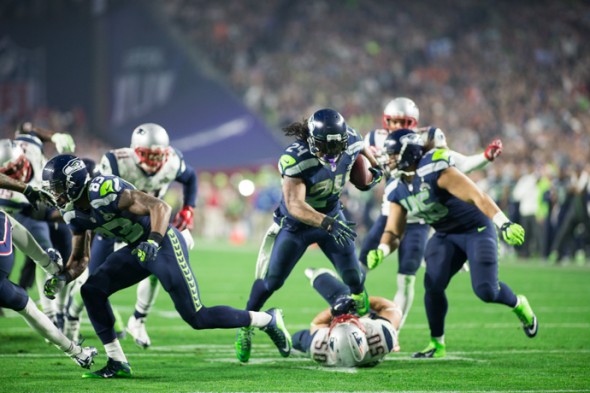 The Seahawks declined to feed The Beast from the one-yard line with the Super Bowl on the line Sunday. / Drew McKenzie, Sportspress Northwest

The world consensus is that Pete Carroll and offensive coordinator Darrell Bevell made the worst call in Super Bowl history by failing to dispatch Marshawn Lynch into the end zone for the game-winning touchdown from the New England one-yard line Sunday night. Instead they opted for a slant pass from Russell Wilson to Ricardo Lockette, generously Seattle’s No. 4/5 receiver.

All 12s will take to their graves the ensuing exploding cigar: Malcolm Butler, suddenly as famous in the Commonwealth as the Old North Church, stepped in front of Lockette, he of 18 career receptions, and became the first undrafted rookie to record an interception in the Super Bowl.

At the same time, Wilson’s interception from the one-yard line was the only such pick in the NFL this season. Worse, Wilson became the first quarterback to throw a fourth-quarter INT from an opponents’ one-yard line in any postseason game in the NFL’s expansion era (since 1960).

Most in the sporting press quickly determined that while Bevell alone made the ill-fated call, it’s Carroll who has suffered a permanent career disfigurement. The following represents only a smattering of the reaction:

Ian O’Connor, ESPN: “Carroll just had to make a decision any Pop Warner coach worth his whistle and drill cones would have made . . . It was over, game, set and match. Brady and Belichick were going to lose. Instead of notarizing his standing as Belichck’s equal, Peter Clay Carroll made the dumbest and most damaging call in Super Bowl history.”

Jason La Canfora, CBSSports.com: “It’s a play, and play call, no one will ever forget, and one that will forever be called up whenever Carroll’s immense imprint on this game is discussed. “

Michael Silver, NFL.com: “Carroll has earned himself a lifetime’s worth of second-guessing from aghast witnesses, some of them inside his own locker room.”

Michael Rosenberg, SI.com: “Losing the Super Bowl is brutal. Losing like this . . .  well, maybe somebody, somewhere, has a good explanation for what happened at the end of this game. But that somebody is not Pete Carroll.”

Bill Barnwell, ESPN: “You will probably never understand why the Seahawks just didn’t hand the ball to Marshawn Lynch in that situation and worry about trying anything else later. Truthfully, neither will I.”

Peter King, SI.com: “That was the dumbest big play-call (it would have been a genius decision had it worked) in Super Bowl history. Maybe Wilson shouldn’t have thrown it. Maybe he should have thrown it out of the end zone. But I’m not blaming Wilson. It wasn’t an audible. The play came from the sidelines, from offensive coordinator Darrell Bevell. Though coach Pete Carroll took the blame afterward, it’s not his call, and it sounded very much like Carroll falling on his sword for a coach on his staff. Whatever, this was a play you simply do not call. Marshawn Lynch had 102 yards against a heavy New England defensive front in the game to that point. He’d just burrowed four yards over the left side, to the one . . . “

A couple of Patriots and at least one Seahawk chimed in on the play with nothing good to say from a Seattle perspective.

Jamie Collins, New England linebacker: “Why wouldn’t you give it to Beast Mode, right?”

Alan Branch, New England defensive lineman: “You don’t expect a team to pass the ball in the middle of your defense on the goal line.”

A lot of NFL players, current and former, thought so as well, as they explained on their Twitter accounts.

Emmitt Smith: Ex-Cowboy, Hall of Famer: “That was the worst play call I’ve seen in the history of football.”

DeAngelo Williams, Carolina Panthers: “QB league my ass . . .  give the ball to your rb and let him run damnit but what do I know I’m watching the game with everyone else!”

Sidney Rice, former Seahawk: “2nd and goal from the 1 yd line -1 timeout and BEASTMODE IN THE BACKFIELD… I would not have throw that ball to Jerry Rice!”

Deion Sanders, Hall of Famer: “That was the worst play call in the history of the Superbowl!!! Worst QB decision Ever!!!!! Ever Ever! Naw I mean Ever!”

As King noted, Carroll manned up and accepted responsibility, and offered a lengthy explanation for why the play was what it was. The Carroll/Bevell thinking:

With one timeout remaining and 26 seconds to play, Carroll/Bevell wanted to maximize the amount of chances to get the ball over the goal line while also limiting the chances the Patriots would have after the Seahawks scored. Carroll/Bevell saw a stacked front against a power run, a matchup they believed they could better exploit with a short route against a rookie corner who had never made an interception.

If the run was stopped short, they would have had to burn their final timeout. That would have boxed them into a pass on third down against a defense nearly as good as the Legion of Boom. So Carroll/Bevell didn’t like Lynch in that situation, even though . . .

The Seahawks had faced five similar situations earlier in the Super Bowl and had given the ball to Lynch four of those times, with Lynch converting once for a touchdown and once for a first down.

Also, the Seahawks rushed on seven of their nine plays from the one-yard line this season prior to the play that will have people second-guessing Carroll through the Second Coming. The Seahawks scored a touchdown on three of seven rushes and tallied twice in dropbacks. That’s 5-for-9 (.555 percent), a stat worthy of Ichiro in his prime.

On the other hand . . . During the 2014 season, Lynch had five carries from the one-yard and scored on only one:

One-for-five essentially made Lynch a .200 hitter in scoring position.

However . . . During his Seahawks tenure (since 2010), Lynch had gone 14-for-32 scoring touchdowns from the opponents’ one-yard line, making him a career .437 hitter in that situation. So do you go with Lynch’s career numbers or his recent “at-bats?”

Facing a stacked box, Carroll/Bevell opted against continuing the current trend and had Wilson fling it into the teeth of the New England defense, where Butler of Division II West freaking Alabama seized his moment to become the answer to a future trivia question.

Carroll/Bevell explained, pontificated, rationalized and justified the call in the bleak Seattle aftermath. But as losers, they won’t get to write the history, a fact Carroll, amid eloquent damage control, seemed to instinctively understand even before the locker rooms cleared out.

“I hate it that we have to live with that,” he said.

During a presser Monday, Carroll denied multiple reports that he changed the goal-line play to a pass after Bevell had called a running play. A conspiracy theory made the rounds Sunday night that Carroll wanted Wilson to win the MVP award rather than Lynch.

Carroll didn’t address that rumor specifically, but said the call was not changed and no reservation existed about having Wilson throw it.

“First off, Darrell is an incredible playcaller,” Carroll said in defense of Bevell. “He’s done a fantastic job. We are so lucky to have him. He has been absolutely instrumental in what we have done. He is an awesome guy on our staff and crucially important to our future, as well.

“And let me say this, too. We don’t ever call a play thinking we might throw an interception. I don’t ever think that, just like (the 11-yard TD pass to Chris Matthews) with six seconds to go in the half. We go with what we know. There was not a thought in my mind that we would make a mistake on (the interception play). It was a tremendous play by the guy on the other side.”

Tom Brady — you saw a future Hall of Famer at his best — went 13-for-15 for 124 yards and two touchdowns in the fourth quarter Sunday (140.6 passer rating), including 8-for-8 for 65 yards on New England’s game-winning drive. Brady tossed four touchdown passes after Seattle, which ranked No. 1 in the regular season in pass defense, allowed only 17 all season. Brady’s four TDs went to four receivers, the first time that had ever happened in a Super Bowl.

In the Carroll era, the Seahawks have allowed four or more TD passes in a game only four times and not once since 2010 until Sunday:

The Seahawks rallied from a 16-0 halftime deficit to defeat Green Bay 28-22 in the NFC Championship game, the largest deficit ever overcome to win a conference championship. Sunday, the Seahawks became the first team in Super Bowl history to allow an opponent to rally from 10 down in the second half to win. Seattle led 24-14 after three quarters and lost 28-24.

The Redskins (XXII) and Saints (XLIV) both trailed by 10 points in their respective Super Bowls, but those were first-half deficits.

Carroll said Monday that CB Richard Sherman will undergo Tommy John surgery after playing in the Super Bowl with a torn ligament in his left elbow . . . Carroll also said that strong safety Kam Chancellor’s injured left knee might “be worse than originally feared.” Chancellor played with a brace on his knee . . . CB Jeremy Lane, who prevented a New England touchdown with an end zone interception in the first quarter, suffered, according to Carroll, a “significant” broken arm when he was tackled along the sideline after making the play . . . Dan Quinn, who spent the past two seasons as Seattle’s defensive coordinator, will be introduced as the new head coach of the Atlanta Falcons Tuesday. Quinn and the Falcons agreed Monday on a five-year contract.