Thiel: Only one way for Seahawks to fix it

The most popular conversation starter on Earth Monday was what is up with Carroll and Wilson? The rest of their time in Seattle will be seen through the prism of one bad play. 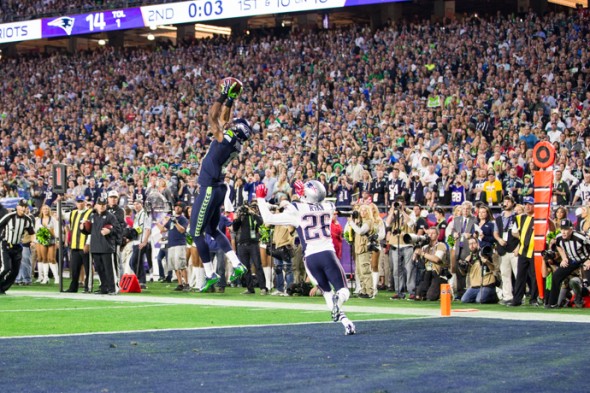 Chris Matthews. Chris Matthews? He went from international media darling to footnote in one play of which he had no part. / Drew McKenzie, Sportspress Northwest

As an unproductive Monday bleeds into Tuesday for the morose 12s, most are thinking they’ve never felt a sports loss like this. They’re right. But fans are nowhere close to feeling the consequences as the entire Seahawks franchise.

While that may seem obvious, the players and coaches, for public consumption, will soft-pedal the epic loss as just another bit of adversity to overcome. In time, they say, everyone will be over it.

It depends some on the definition of time. If we’re speaking of the period between now and when the sun goes supernova, some future generation of giant-headed, bug-eyed, skinny humanity might no longer make it a point of reference.

Erghdul: Remember when Carroll passed instead of ran and lost the Super Bowl?

Whzzrk: Our people have not spoken of that in some time. Second-and-goal at the one, right?

But if we’re speaking of the sports fan’s universe, which typically includes just a single earth revolution of the current sun and ends in 369 days in Levi’s Stadium in Santa Clara, CA., site of the next Super Bowl,  then no, the world and the Seahawks will not be over it.

They will be consumed by it. Much as they do not want to be.

The way XLIX finished is perhaps unlike any outcome in high-profile sports history. The idea that a marvelous contest between two titans could have its storybook finish dorked up by one of the game’s craftiest innovators and his Harry Potter-ish apprentice wizard stands in mute defiance of the greatest fiction writers.

The previous most grievous loss in the Carroll junta in Renton was the 30-28 playoff defeat in Atlanta in the 2012 playoffs. A brilliant rally from a 20-0 deficit to a 28-27 lead in the final minute was undercut by defensive gaffes that permitted a last-gasp field goal to win.

But that was Russell Wilson’s rookie year, and the first experience with sustained success. The defeat morphed into a coaching-textbook example of teachable moments, lesson-learnings, blah-blah-blah.

That game was a rock in the road. Sunday in the desert was a plunge off the cliff.

Pete Carroll needs to break out his Indiana Jones fedora and bullwhip before the bus hits the canyon floor.

The 2014-15 Seahawks needed no learnings. A complete, mature team, they were the defending Super Bowl champions at the apex of their industry, roaring down the field with two minutes left toward the game-winning touchdown and the required happy ending those of us trained by Spielberg demand.

The bad guys were being hurtled off the bus. At the stadium and through the TV, it was possible to feel the wind and taste the dust.

Suddenly, the bus didn’t make the final turn. The 12s and the franchise are now in that unique, weightless space where all is quiet, save for the traction-free spin of the wheels.

We’ll leave the metaphor hanging here because it’s time look at how difficult the sequel will be.

The reason this Seahawks’ loss will be so difficult to manage is that every personnel move, coaching hire and public utterance will be seen through the prism of one bad play. The question will be asked always: How will the changes keep the Travail in Glendale from happening again?

Of course, logic says that is a ridiculous proposition. But it feels true because the two people most tangibly responsible for the astonishing success of the Seahawks over the past three years, Carroll and Wilson, were the same ones who dorked up season’s final play (with coordinator Darrell Bevell in the role of Jar-Jar Binks). Their cred is on the line.

Wilson gets no pass from responsibility for the pass; six inches to his right, and some some 12s are camping on downtown sidewalks tonight for premium spots in the parade.

Wilson is the victim of his own expectations, especially since the miracle, Kearse of the Undead rally against Green Bay two weeks earlier.

Presuming good health and the delivery of the ginormous contract extension for Wilson, the pair will be in charge next season, but scarred — insofar as the perception from outside.

Knowing both, they will find a way through the morass and end up fine on the other side. The problem is everyone else, including some teammates and assistant coaches who should all know better, but succumb to a simple human vulnerability:

That play cannot be unseen, cannot be ignored and cannot be worked around. It has become an instant, permanent part of American — and likely global — pop-culture history, whose only local “virtue” is that the iconography around it may surpass the agonizingly overdone fish-throwers as a Seattle stereotype in urgent need of dispatch.

Now, the achievements and the failures of Carroll and Wilson are intertwined, and an irresistible topic of speculation. Think about it — most every adult human with access to internet or TV has heard about the episode and probably has an opinion about Carroll and Wilson. For one day Monday, no subject on Earth was a more universal conversation starter.

Only one resolution is possible: Win the Super Bowl next year. Anything less, and the Travail in Glendale will be an unresolved chord destined to hang forever over the franchise and all the participants.

Not only have the Seahawks thrilled their own fans, they have won over some unaffiliateds because they are audacious, unconventional, successful and colorful. Just when they were one yard from concluding all the great stories of the day – Chris Matthews going from nowhere to stardom, Carroll beating the owner who fired him as well as his successor at New England, Marshawn Lynch becoming King of All Media, the ordination of Wilson as the new QB legend and Jermaine Kearse as the Pedestrian Who Won the Earth – it all came apart.

To fix it, they have to do it all over again, plus one yard.

The canyon floor gets closer every day.