Yes, final play was a brick. Before that, a defense weakened by injuries allowed consecutive 4Q TDs. First loss in 31 games in which Seahawks were up 10+ points in 4Q. 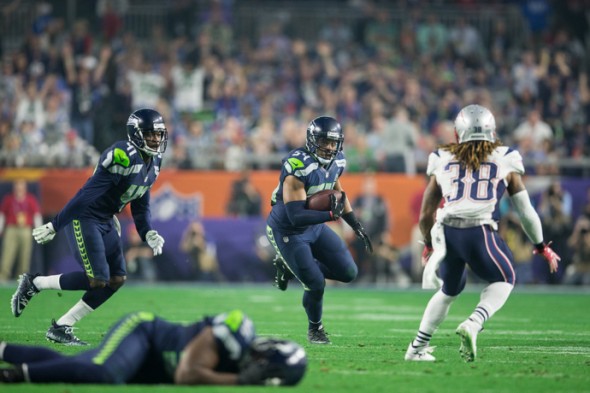 The play by Bobby Wagner in the third quarter of the Super Bowl was crucial in different ways: The interception set up a Seahawks’ touchdown, but on the return, DE Cliff Avril (foreground) was knocked out of the game. / Drew McKenzie, Sportspress Northwest

RENTON — Conventional wisdom is that the Seahawks’ final-play disaster was what did in their bid for a second Super Bowl win, and it will be remembered thus, forever. A more layered explanation is that the defense by the fourth quarter had broken down sufficiently to allow consecutive touchdown drives by New England, forcing Seattle into yet another late rally to win.

The comeback, as the cosmos knows, was a yard short of working. But as WR Doug Baldwin put it Tuesday on the team’s getaway day, “It should never have come down to that.”

It may not have come to that if DE Cliff Avril had remained in the game. But Seattle’s best pass rusher was concussed in the third quarter during teammate Bobby Wagner’s six-yard return of Patriots QB Tom Brady’s second interception.

Avril was apparently knocked cold. Team doctors ushered him off the field and ordered him to remain in the locker room for the duration, which would have included the field celebration, had the Seahawks won.

The loss of Avril, which followed the loss of CB Jeremy Lane (broken arm) in the first quarter, also on an interception return of his own, were major blows to a defense that was operating at sub-par levels with previous injuries to CB Richard Sherman (elbow), FS Earl Thomas (shoulder) and SS Kam Chancellor (knee hurt Friday in practice).

The upshot was that New England in the fourth quarter followed a nine-play, 68-yard scoring drive with an 11-play, 64-yard scoring drive. Against the NFL’s No. 1 defense, Brady completed 13 of 15 passes to create the a winning rally from the largest second-half deficit (10 points) in Super Bowl history.

Over the past three seasons, the Seahawks have had 31 games in which they held a fourth-quarter lead of 10 or more points. Sunday was the first one they lost.

“Two fourth-quarter touchdowns — that’s not like us, for sure,” Avril said. “I guess you could say (injuries were) a big difference. But again, injuries are part of the game.”

The injuries-are-no-excuse refrain was a common theme Tuesday as the Seahawks tried, mostly in vain, to re-gather themselves after the shocking 28-24 defeat Sunday that will live in national-sports infamy.

But it’s not an excuse if it’s a fact that DE O’Brien Schofield is not Avril’s equivalent, and especially true in the case of Tharold Simon, the second-year cornerback inserted into the lineup as CB Byron Maxwell was moved inside to replace Lane in the nickel defense.

Brady and the Pats picked on Simon, who sat out his rookie season with injuries, throughout.

In a press briefing Monday before the team left Phoenix, coach Pete Carroll made a point of identifying the defensive vulnerabilities.

“It was an extraordinary effort from guys who played through unbelievable issues,” he said. “You didn’t ever know it during the game. Earl and Sherm, to make it through this game and play with the problems they have, is one thing that was notable. For Kam Chancellor to play in this game was just like superhuman stuff. He shouldn’t have been able to go.”

Sherman will have elbow surgery, although it is not likely to be Tommy John surgery, as Carroll was led to believe Sunday. Thomas may have surgery to repair a torn labrum, but that remains undecided. Chancellor played with a brace and was obviously limited in his movements, although he had 10 tackles. Thomas had nine and Sherman three.

Avril said he understood the doctors’ decision to keep him out.

“The hard part was not playing,” he said. “It was the Super Bowl, but at the end of the day, they did the right thing. I think your brain is way more important than the game.”

Brains, and the Seahawks’ lack thereof, was a rich source of humor around the web Monday as mockery attended the Seahawks’ final-play choice to pass, which turned into a game-saving interception by rookie CB Malcolm Butler. 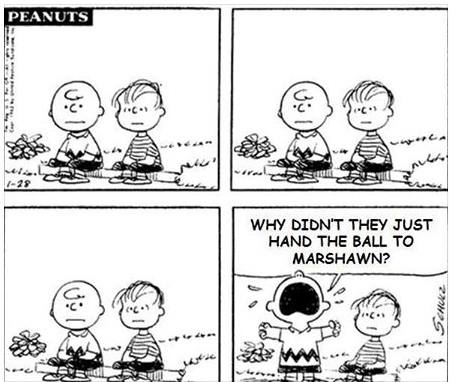 Everyone lamented the Seahawks’ choice.

Publicly, at least, the Seahawks were avoiding any further public dismay over the call to throw to Ricardo Lockette instead of giving the ball to Marshawn Lynch.

Predictably, Wilson is on to making something positive about it.

“You guys are probably going to be asking me questions for the next 15 years, hopefully, so hopefully, when you guys ask me this 15 years from now, hopefully, I’ll have several Super Bowl rings and you guys will ask different questions.”

Hopefully, Wilson might have seen something in the dozen or so times said he reviewed the game that suggested something different could have been done with the play. But no.

“I shouldn’t say wide open, but it looked open enough to get it in there (to Lockette) and make the play,” he said.  “When I threw it, I was like, ‘Touchdown, second Super Bowl ring, here we go.’ And it didn’t happen.

“You just learn from experience. That’s why you play the great game, because you look forward to the next opportunity.”

Probably the most honest assessment of the team’s attitude came from punter Jon Ryan, who recognized with others that the Seahawks have played more ball than any team the past two seasons.

“Football kind of always is an escape from reality,” he said. “Right now some guys are trying to escape football.”

WR Doug Baldwin was asked if he was bothered by Darrell Bevell’s remark that Lockette could have done more to catch Wilson’s fateful pass: “Yeah, I’d be lying if I said it didn’t bother us. He’s the coach. You take that criticism, look in the mirror and figure what you could have done. It’s harsh, but the reality is in the heat of the moment, people may say or do things they like to change. We’re going to stick together, so none of that matters.”

Carroll, who did not meet with media but spoke on his final weekly radio show Tuesday on ESPN 710, said talks are underway with Marshawn Lynch for a contract extension but did not illuminate: “We’ll see. We’ve been in the midst of negotiations for a long time for the future, so we’ll see how that goes.” . . .  He said the departure of DC Dan Quinn to become Falcons head coach means there could be a staff shuffle because other assistants are being interviewed for jobs with other clubs. Two in-house candidates that could receive a look to replace Quinn are DBs coach Kris Richard and LBs coach Ken Norton Jr. . . . Besides Avril, LG James Carpenter also came out of the game with a concussion . . . Lane’s broken arm horrified onlookers. Carroll: “It was a really nasty break. It will take some time.”. . .  Carroll said he was shaping a strong message as the leader of the team: “I’ve got to be clear about it and I am clear about it . . . We’re going to be stronger for this. Going to be better for this. But it’s just cruddy right now that we have to feel like this.”