Based on sports history, ESPN’s Keith Olbermann claims the Seahawks’ only hope is to blow up everything. Unlikely. But there is a productive way to start 2015: Own the mistake. 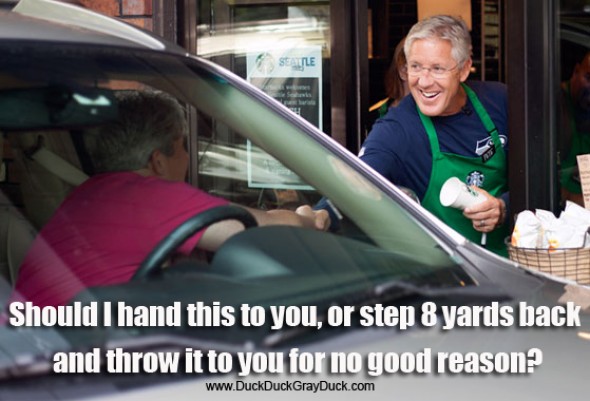 In case Pete Carroll needs more humor in his life . . .

Russell Wilson said something Tuesday to reporters on getaway day at Seahawks headquarters that, for him, sounded perfectly natural and innocuous. Until I thought about it.

“The part I hate,” he said,  “is that I have to wait seven months to play another game. So I think that’s where my focus is on — what we can do to prepare for that opportunity again.’’

It reminded me of what coach Pete Carroll said shortly after the 28-24 loss to the Patriots that ripped a hole in his carefully constructed “win forever” approach to group motivation.

“I hate it that we have to live with that,” he said.

What struck me is that Carroll and Wilson almost never use “hate” as a term describing their emotions. Hate is certainly a perfectly understandable expression in the hours and early days after the worst sports moment of their professional lives over which they had control.

In the context of searing drama, it’s easy to read into the anger more than is there. But in this case, anger is going to be hard to subdue, given all the abuse directed at the Seahawks’ play call that will live one day past forever. The issue now looms larger for the Seahawks than the pending contract extension for Wilson and, potentially, Marshawn Lynch.

Far be it from me to tell a master of motivation such as Carroll how to manage his team’s psychology in what will be the most demanding year of his professional life.

I’ll let Keith Olbermann do it.

ESPN’s commentator/comedian unleashed consecutive tirades against the Seahawks. The first one Monday insisted that the nature of the defeat was so profound that the only choice for the Seahawks to get beyond it was to blow up everything.

The theatrics of the studio walkout were mildly amusing, but the point about the potential for franchise disarray that follows self-destruction at the pinnacle was spot on. As Wilson intimated, the urgency to make immediate amends is strong. But for seven months, there is nothing but the void.

What Olbermann left out was the details of the dubious history of franchises who get consumed by the fires of redemption. He made up for it on Tuesday:

There are some quibbles with parts of Olbermann’s selective history, and in this case I don’t agree with his conclusion about blowing up the franchise and starting fresh. That’s  because the Seahawks are not an aging team that had its last shot Sunday, and because the key relationships — from owner Paul Allen to GM John Schneider to Carroll to Wilson — likely will remain intact through the firestorm of mockery.

But I wrote Tuesday about pending trouble to which Olbermann referred: Every personnel move, public utterance and strategic maneuver will be seen through the prism of one bad play, however illogical that seems.

That’s where Carroll must develop a workaround.

There’s no question the Seahawks will have to deal with two tangible matters for which they have little experience:

Going through the mail after returning from Phoenix, I saw the Sports Illustrated cover of the Legion of Boom. Talk about a jinx.

Of the five players pictured, four were unhealthy at game’s end. The healthy guy, CB Byron Maxwell, is a pending free agent.

For sure, CB Richard Sherman (elbow) and Jeremy Lane (broken arm) will have surgery. FS Earl Thomas (shoulder labrum) might. And the mystery of SS Kam Chancellor’s knee injured in Friday’s practice ended Wednesday when he told the team’s website, seahawks.com, that he played with a torn medial collateral ligament in his left knee, along with a bone bruise.

After the game, I asked Chancellor how much the knee limited him.

I tried again. Were you having trouble?

So now we know. Something tells me New England’s Bill Belichick and QB Tom Brady had a pretty good idea by the fourth quarter.

Best-case scenario is that all return healthy by September. But when the length of the past two seasons is figured in with the standard wear-and-tear on high-motor veterans in the middle of their careers, it’s not a great leap to imagine the peak period for this group might have passed Sunday in Glendale.

Presuming good health and knowing their characters, the Legion will return seething, as will Wilson, Carroll and many of the Seahawks who are retained. But that is always the case for the all the near-championship teams who failed in the crucible. As Olbermann pointed out, only the late-1980s Edmonton Oilers of the NHL survived loss and the trade of Wayne Gretzky to maintain a championship edge.

Carroll will have to devise an approach that turns the rage into a patient rebuild of trust in him and Wilson that stays away from perpetual replay of the Travail in Glendale (or as one site commenter offered in a Boston accent, The Bonah in Arizonah).

I offer one small suggestion, this from the experience of another figure who spit up in the Super Bowl: Referee Bill Leavy. He was the notorious official whose calls crippled the Seahawks in their first Super Bowl, XL in Detroit, a 21-10 loss to Pittsburgh.

“It was a tough thing for me,” he said. “I kicked two calls in the fourth quarter and I impacted the game and as an official, you never want to do that. It left me with a lot of sleepless nights. I think about it constantly. I’ll go to my grave wishing that I’d been better. I know that I did my best at that time, but it wasn’t good enough.

“When we make mistakes, you’ve got to step up and own them. It’s something that all officials have to deal with. But unfortunately, when you have to deal with it in the Super Bowl, it’s difficult.”

Leavy’s admission doesn’t fix anything. But it did explain that fans weren’t crazy, and referees do have consciences. The only problem was Leavy waited four years for his confession at Seahawks training camp in 2010.

It’s true that Carroll and Wilson both owned up to responsibility post-game. But it sounded like a patterned response, not something they meant. Because both continued to explain and defend the call and execution.

That’s understandable. It’s what most of us do most of the time after a major mistake. Carroll and Wilson are entitled to grope awhile.

But the sooner they get to an unconditional “We screwed up,” the faster they get toward blowing up Keith Olbermann and the rest of the massive new subset of comedy they have created.