Former Seahawks DT Sam Adams (1994-99) and a cohort face 21 counts of wage theft and tax fraud for their alleged improprieties at a pair of local health clubs. 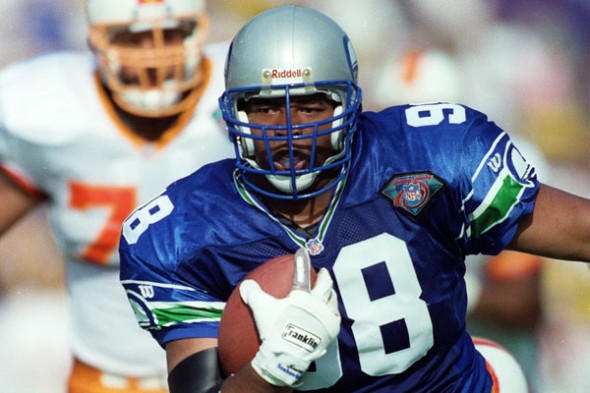 Former Seahawks defensive lineman Sam Adams was charged with multiple felonies by the state of Washington this week for allegedly failing to pay taxes and withholding workers’ pay and benefits at the fitness clubs he ran with an associate in Seattle and Tacoma.

Dana Sargent, 43, is the other defendant named. He was Adams’ top financial officer at the fitness clubs.

“The defendants allegedly failed to pay state taxes, withheld wages from workers, failed to pay workers’ insurance premiums and failed to pay unemployment insurance,” according to a press release from attorney general’s office.

Adams and Sargent owned and operated six athletic clubs, four in Oregon and two in Washington. In October, Adams filed for bankruptcy and sold back his gym in West Seattle to the building’s landlord after failing to pay rent. His club in Tacoma, Lincoln Plaza Athletic Club LLC, closed in 2013 after Adams failed to pay retail sales tax.

According to the affidavit for determination of probable cause, Adams and Sargent allegedly failed to pay 11 employees a total of $7,166, the state $446,000 in retail sales tax and cost Aetna Healthcare $41,460 in unpaid medical and dental premiums after taking insurance premium payments out of employees’ paychecks. It also claims Adams and Sargent failed to pay more than $35,000 in state unemployment insurance.

When contacted Friday by the Associated Press, Adams said he was unaware of the allegations.

This is just the second wage-theft criminal case brought forth by the state, which is seeking full restitution. Arraignment is set for Feb. 18 in King County Superior Court.

“Wage theft is a crime, and its victims are often among our most vulnerable residents,” said state attorney general Bob Ferguson in the press release. “I won’t stand for violators who cheat working families out of their hard-earned wages. My office will prosecute unscrupulous businesses that steal money out of the pockets of wage earners and taxpayers.”

A three-time Pro Bowl selection, Adams, the Seahawks’ first-round pick in the 1994 draft, played six seasons in Seattle (1994-99) before winning a Super Bowl with the Baltimore Ravens in 2000. He also played for the Oakland Raiders, Buffalo Bills, Cincinnati Bengals and Denver Broncos during his 14-year NFL career.

The full affidavit can be found here and here.