After starring at quarterback for Eastern Washington, Vernon Adams is transferring to Oregon for his redshirt senior season. 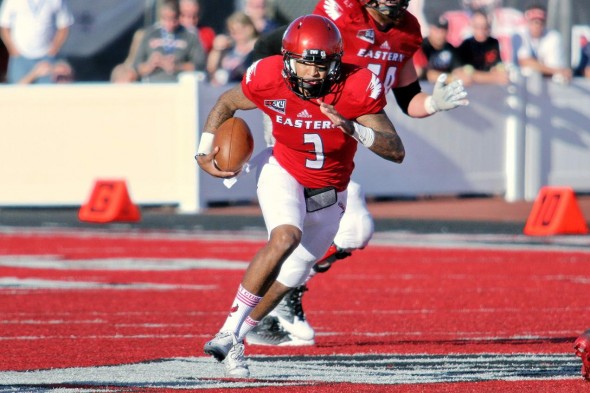 Eastern Washington QB Vernon Adams will transfer to the University of Oregon for his senior season. Adams announced the news Monday morning from his Twitter account after recently visiting the Ducks’ campus in Eugene.

Adams won’t have to sit out next season. The NCAA’s fifth-year transfer rule states that an athlete who finishes his degree in four years but still has a season of eligibility remaining can transfer to another school without restrictions if he pursues an advanced degree. Adams redshirted in 2011, so he’s in line to earn his diploma from EWU before joining the Ducks this summer.

His transfer wouldn’t make much sense if he didn’t consider himself a frontrunner to land Oregon’s starting quarterback job. The competition is considered open after Heisman Trophy winner Marcus Mariota declared for the NFL draft shortly after the Ducks were trampled by Ohio State in the first College Football Playoff National Championship game.

Adams’ move from the FCS ranks to a Power 5 program in the FBS — especially one with national title aspirations — is unprecedented. He was reportedly also receiving interest from UCLA and Texas.

On Sept. 6 he threw a school-record seven touchdowns, completing 31 of 46 passes for 475 yards in a 59-52 loss to Washington at Husky Stadium. In 2013, he led the Eagles to an upset win over Oregon State at Reser Stadium by throwing for 411 yards and four touchdowns and rushing for 107 and two more.

A Pasadena, CA., native, Adams the past two seasons finished runner-up for the Walter Peyton Award, given to the top player in FCS, and was named an All-America selection.