At 35, Kris Richard is young for a coordinator, but his time under Pete Carroll with the Trojans and Seahawks has taught him much about the highest of highs and lowest of lows. 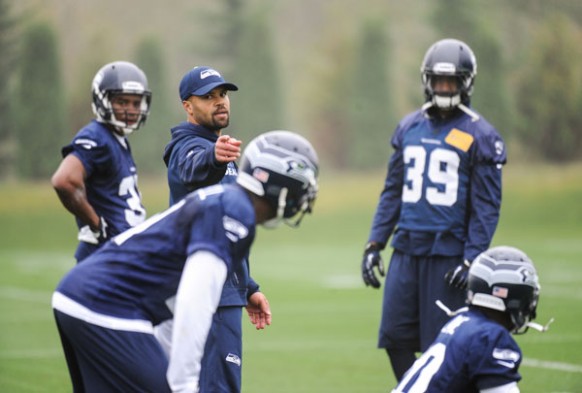 New defensive coordinator Kris Richard seems to have the makeup to lead. / Seahawks.com

Beyond a Super Bowl win and loss, there is a statistical feat that illuminates above others the most astonishing aspect of the Seahawks’ ascension: The defense has led the league in scoring defense for three years in a row, something the NFL has not seen since the famed Purple People Eaters of the 1969-71 Minnesota Vikings.

The deed is even greater today than in the days of Carl Eller and Alan Page, because there was no free agency then, meaning units could stay together for as long as their bodies did, without worry of attrition by cash. Nor were there nearly as many “Mother May I” requirements before addressing opponents’ forward motion.

In succeeding Dan Quinn as Seahawks defensive coordinator, Kris Richard has been given a stout task — don’t screw it up.

For Richard (rih-SHARD), at 35 a former third-round pick by the Seahawks in the 2002 draft who played three seasons and 39 games (one start) at cornerback in Seattle under coach Mike Holmgren, it seems a sudden rise.

Then again . . . next man up. Perhaps you’ve heard the phrase.

In the run-up to the Super Bowl, I asked the commander of the Legion of Boom how he managed to maintain the high level of his unit’s play despite losses to injury.

“We’re all involved in that,” he said, with the intense eye contact that is part of his style. “It’s everyone’s responsibility. Hence the term Legion – it’s many.

“You’ve heard the saying, ‘You’re only as strong as your weakest link’? How about no weak links? Then how strong are you?”

That sums up a lot of Richard’s approach in coaching — no weak links. Everyone strong, everyone together. Check your egos at the door.

At the time of the conversation, Quinn’s departure to become head coach of the Atlanta Falcons was certain, but succession was not. Linebackers coach Ken Norton Jr. was a candidate, and coach Pete Carroll hinted at an outside search. But spending a few minutes around Richard offered a glimpse of what CB Richard Sherman was talking about during the week, and why Richard became the easy selection.

“The only first-round guy that anyone ever knew about was Earl (Thomas),” Sherman said. “Now everyone is like, ‘Oh, you guys have this big-time secondary.’ Where were you guys at in 2011 when no one knew us from nobody?

“I think (Richard’s) growth with us through that process to where we are now is the reason we respect him so much. He kind of built the giant that we are now with discipline, attention to detail, always being on it and always keeping us humble and down to earth, especially in the meeting room, making sure we understand our strengths, our weaknesses, what we do well and what we don’t do well.”

Richard had complete command of the unit around which the team is built. The secondary is priority one for Carroll, a defense-first coach who builds from back to front.

From his years with Carroll, first as a player at USC, later as a Trojans assistant and then joining the move to Seattle, he has learned the ways. Close your eyes, and he sounds like the boss when he’s talking about self-sacrifice.

“Each and every man’s responsibility is to give his best to the next,” Richard said. “If a man goes away, the next is ready to roll in there. Grab the reins and run. (The Super Bowls are) a testament to these guys, giving everything to one another, and of yourself. Sharing all your knowledge and information. That’s why we keep it rolling.

“The only thing in your control is your effort and attitude. Everything else is out of your hands. What are you willing to do: Give the best of yourself? Or are you going to sneak behind people’s backs and gather information (for yourself)? That’s not what we’re about. That doesn’t build trust. Doesn’t build cohesiveness.”

Trust and cohesion were stressed to the max in the Super Bowl against New England’s Tom Brady, who threw 50 passes, many on underneath routes that did not allow the Legion big impact. He was picked off twice, but as the game wore on, the Seahawks defense wore down.

The loss of slot corner Jeremy Lane to an arm broken on his interception return was critical. His absence moved CB Byron Maxwell into the slot and brought Tharold Simon, in his first full season, into the game on the outside. Brady picked him apart.

After Seattle’s best pass rusher, Cliff Avril, went out with a concussion, Brady had the advantage. Besides Lane’s absence, and the torn labrum in Thomas’s shoulder and torn ligaments Sherman’s right elbow, leftovers from the NFC Championship, SS Kam Chancellor was operating with a left knee whose MCL was torn in practice Friday.

Talking with Richard before all this played out, I asked him how hard it was to manage the injuries to Thomas and Sherman against Green Bay when the players were visibly diminished.

Don’t players lie most of the time about injuries?

“It’s a trust factor,” he said. “When you’ve been around a guy long enough, you know how to look him in the eye to see if he’s telling the truth. They have time on the sidelines with doctors. If they are cleared medically, it comes down to: Can you do this? Can you go?

“We’re not going to risk their health, and we can’t risk the rest of the team. If you can’t compete, you’re going to hurt yourself and us. That’s the last thing we want. You have to protect yourself, then go out and execute.”

Richard got around to a key point in the trial of pushing athletes through pain thresholds without jeopardizing futures.

“There’s a funny thing about pain, and we’ve talked about this many times with players,” he said. “Pain is a decision. Pain doesn’t really hurt. It’s uncomfortable, but what hurts is whether or not you can go.

“In life, what hurts is whether you can feed your family, or can you keep the home you live in? That hurts. Not pain. When you’re in that moment about deciding what really hurts . . . pain is a choice. It may be uncomfortable – if it’s broken, you gotta get it fixed – but the decision is whether you are holding (effort) back.

“Earl and Richard made a decision to give us all they have.”

As they did again, along with Chancellor, in the Super Bowl. Came up a yard short of working.

Which, of course, only adds to the hurt beyond the pain.

At 35, Richard begins young his new role as D-coordinator, but not without experience in dealing with high highs and low lows of the men in his charge. Comes now the pursuit of a chain with no weak links, and a new pursuit of the final yard.