Thiel: Huskies no match for No. 7 Arizona

In front of a national TV audience, the Huskies were predictably pantsed by the No. 7-ranked Wildcats 86-62, the only hope being next year’s recruiting class. 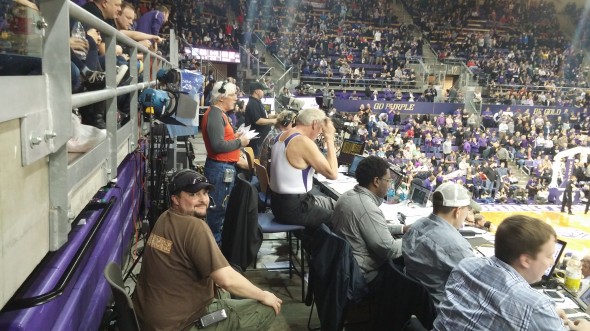 The evening’s highlight was ESPN broadcaster Bill Walton peeling off his shirt to reveal his crew uniform he earned during a Friday morning row on Lake Washington with members of the University of Washington’s national champions. / Art Thiel, Sportspress Northwest

The last six times Arizona came to Hec Ed, Washington won five of the matchups. The chance of No. 6 Friday night was about as likely as Bill Walton forgetting lyrics to a Grateful Dead song.

Broadcaster Walton and a national ESPN TV audience bore witness to the sad state of Huskies’  hoops affairs. The evening for Washington adherents in the crowd of 6,999  peaked at 3-0, and the rest was spent listening to a persistent “Yoo of A! Yoo of A!” chant by a cohort of Wildcats fans delighting in the 86-62 walkover.

The Huskies’ sixth defeat in a row was no surprise against the seventh-ranked Wildcats (21-3, 9-2), who had at least three future NBA players in the lineup. The only drama was in pondering whether Washington (14-10, 3-9) can win any of its final six regular-season games.

If they run the table of woe, they will be scarred with the hoops ignominy of losing the final dozen games in a season that began with 11 consecutive wins.

But it wasn’t possible to tell of imminent doom from coach Lorenzo Romar’s chin-up, forthright demeanor.

“Please don’t mistake my lip not being on the floor, for (me thinking) it’s not disappointing,” he said, spinning through a triple negative as if he were beating a man-to-man press in his playing days. “It’s very disappointing. I’m just not a moper.

“There’s not too many minutes in the day I’m not thinking about this, how we right this ship.”

Unfortunately, the answers are not on the current roster. The answers are next year, when he welcomes a recruiting class that some of the people who make livings chasing after high school boys say is one of the best classes in the nation.

That forecast is Romar’s insurance against the hounds who demand his ouster for what will be a fourth consecutive season without an NCAA tournament bid. Once he booted the nation’s leading shot-blocker, Robert Upshaw, off the team Jan. 26, it was the end of a fragile season’s hopes.

Romar’s best teams have always been predicated on defense. The only reason this version of the Huskies was competitive early was because of Upshaw’s enormous capacity for cleaning up teammates’ mistakes or laziness. Without him, they have been exposed.

At one point in the first half, the Wildcats scored on 10 consecutive possessions. With the Huskies possessed currently of only one big man, a soft Shawn Kemp Jr. at 6-9 (one rebound and one block in 30 minutes), the bigger Wildcats powered down the lane with impunity.

“We did a poor job of keeping them in front of us,” Romar said. “At times we were pressuring when we shouldn’t have, and they drove us. We talked about hem being a team of slashers. For whatever reason, we felt we could get up in them.”

Chief among “them” was freshman forward Stanley Johnson, who at 6-7 and 245 pounds can move out defenders low, and shoot over them high with a silky jumper. He had a game high of 20 points along with eight rebounds on his way to a likely star turn in the NCAA tournament before he’s in pro ball by June.

The Huskies’ Andrew Andrews answered admirably with 18 points and 11 rebounds, but that was about it as far as sustained quality. The Huskies’ best player, guard Nigel Williams-Goss, was hounded into a 1-for-10 shooting performance by Rondae Hollis-Jefferson, whom Romar called one of the nation’s best defensive guards.

“It reminds me p back in the day when the Bulls put Scottie Pippen on Magic Johnson,” he said. “His (6-7) length is a factor. He’s one of the few guards who’s good enough defensively to be there with you.”

Amid the tailspin, Romar doesn’t have the luxury of gazing at the big picture that includes his shrunken roster and the cavalry coming next fall.

“Sitting there in the game battling, I’m not thinking, ‘We don’t have the horses,'” he said. “We have to do a better job. We did a better job in the second half — they didn’t get as many layups. A factor with us is, we ran out of gas. We don’t have the depth to play the kind of defense we want.

Then we’ll do the thinking for him. He can’t play a lineup of four and sometimes five  guards if they aren’t capable of running the floor and scoring in big bunches for 40 minutes. But that’s all he has, and he knows it.

“We need more of a frantic pace,” he said. “To do that, we have to pressure . . .  make the other team uncomfortable with the ball. You have to have quality depth to do that. The first 10 minutes probably are pretty good, then you run out of gas a lot quicker.”

Huskies fans who want Romar gone are wasting their time. The season at hand is a sunk cost, and Romar has new capital coming. As is always the case, it’s only good on paper and it’s often confusing when six guys show up at once with some holdovers and all think they deserve to start.

But compared to what was visible Friday night, it will be a profoundly thrilling problem for Romar to have.