Former Washington State basketball coach George Raveling will be inducted into the Naismith Memorial Hall of Fame in Springfield, MA., in September as a contributor. 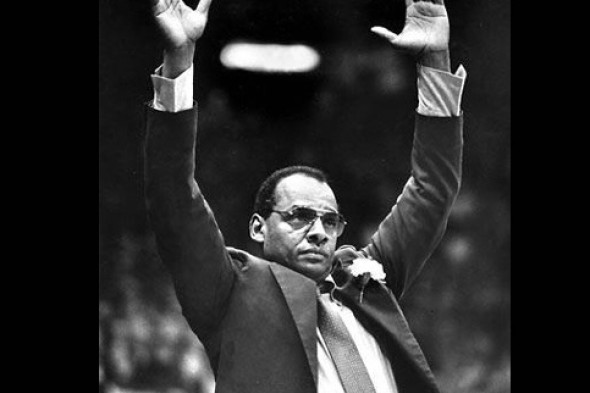 George Raveling has spent most of his 77 years spreading his love for basketball around the world. It only seemed appropriate that it was on Valentine’s Day that basketball bestowed its ultimate expression of love upon Raveling.

Raveling, who became the first black head coach in Pac-12 (then the Pac-8) Conference history when he arrived at Washington State in 1972, Saturday was elected to the Naismith Memorial Basketball Hall of Fame. He will be inducted as a “contributor” Sept. 11 at the Hall of Fame in Springfield, MA.

Raveling, rarely at a loss for words, seemed taken aback by his latest honor when reached by phone at New York’s JFK International Airport as he prepared to fly back home to Los Angeles.

“It’s one of those things that you don’t think about as you go through your day-to-day activities and grow older, because you just don’t think what you’ve done is that noteworthy,” Raveling said. “Fortunately, some other people thought that over the years, maybe I came away with enough positive things to be considered. It’s been a shock.”

Raveling’s 11-year run at Washington State was one of the longest and most successful runs in WSU sports history. He also enjoyed great success at Iowa and USC, received national coach of the year awards and won a gold medal as an assistant coach on the 1984 U.S. Olympics team, but Pullman still holds a special place in Raveling’s heart.

“One of the most consistent questions I get is, ‘Of all the places you coached, which one did you like the most? What was your best job?’ I always say, unequivocally, Washington State,” Raveling said.

“It was the best 11 years of my coaching career. That’s not to put down Iowa or USC.”

Raveling said he had “the greatest relationship that a coach could ever have” with a school president and athletic director when he worked with Washington State president Glenn Terrell and AD Sam Jankovich.

“I almost get choked up now,” Raveling said, “but I always remember Dr. Terrell saying to me – I remember this vividly in the interview after I got the job – he said to me, ‘Coach Raveling, I want to tell you something. I’ll always be there when you’re losing, I’ll never be there when you’re winning.’

“He was so supportive of me. He was getting ready to retire. He called me at night at home. He said, ‘Coach, what are you doing?’ I said, ‘Just watching TV.’ He said, ‘Drive over to my house. I want to talk to you.’

“So I go over, and he says, ‘I want to tell you this personally. Next semester I’m going to announce I’m retiring as president.’ I was stunned. So I say, ‘Wow.’ Then he says, ‘You don’t have anything to worry about . . . I’m going to put five more (years on Raveling’s contract), so if anybody comes in, I’ll have the contract set so they can’t fire you if they want to.’ That’s the kind of guy he was.”

Terrell and Ray Nagel, Washington State’s AD in 1972, took plenty of heat for hiring a black head coach. It did not help matters when the Cougars went 6-20 and finished last in the Pac-8 in Raveling’s head coaching debut.

“When you look at the configuration of the Pac-8 at the time,” Raveling recalled, “it was probably the last school that you would think would hire a black coach, because of the geographic (read: rural and white) location.”

Raveling soon started winning games and winning over fans. A 19-7 season in 1975-76 kicked off a rare five-year string of winning seasons at WSU. The Cougars made it to the NCAA tournament in 1980 – the only previous appearance came in 1941 – and the Cougars returned in 1983.

After becoming the first WSU men’s basketball coach to be named conference Coach of the Year in 1982-83, Raveling said the combination of Terrell’s pending retirement and Jankovich’s departure for Miami prompted his departure for Iowa.

“I never left WSU because I was unhappy there,” Raveling stressed. “I just didn’t want to work for a new president and AD. Those guys kind of spoiled me.”

The same could be said for Washington State students.

“Students had as much to do with our success as our coaching staff and players did, because they inspired us,” Raveling said.

“There was a time – I know you wouldn’t believe it now with the (declining) attendance – but there was a time when they would camp out (overnight) for seats, and the student section would be packed to capacity.

“There was an emotional connection between the students and me. At least I felt that way. I have people come up to me occasionally and say, ‘I was at Washington State when you were coaching there, and I want to tell you how fun it was.’”

As he did at Washington State, Raveling twice guided Iowa and USC to the NCAA tournament. He spent three years at Iowa and eight at USC before retiring from coaching after he was seriously injured in an auto accident in 1994. He has worked in international basketball circles for Nike for the most part since leaving the coaching profession.

Raveling, a Washington, D.C., native who played at Villanova, ranks behind only Cougars legends Jack Friel and Fred Bohler in wins (167) and winning percentage (.551) for men’s basketball coaches who spent four or more years at Washington State. As much as the winning, Raveling will be remembered for his warm personality and humor (“Pullman isn’t the end of the world, but you can see it from there”) at WSU.