While other positions have needs, after watching Tharold Simon flail in the playoffs and assuming free agent Byron Maxwell moves on, cornerback should be priority No. 1. 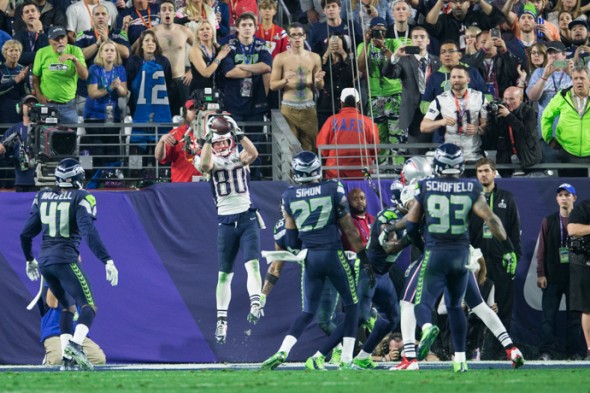 Don’t be surprised if you don’t. Scar tissue in the sports memory must necessarily be thick. He was the third-string Seahawks safety in Seattle’s first appearance in the Super Bowl in 2006, when Steelers QB Ben Roethlisberger discovered Pruitt’s unexpected presence in the Seahawks secondary, due to injury, and went yippee-damn-skippee on him.

You know, like Patriots QB Tom Brady did when CB Tharold Simon entered the Seahawks’ most recent Super Bowl in the second quarter.

Simon came in only after nickel CB Jeremy Lane broke his arm gruesomely during the return of his first career interception. The injury from the freakish fall required surgery and leaves his playing future a little uncertain. His departure caused the Seahawks to move starting CB Byron Maxwell from outside to the inside slot and bring Simon into the game on the outside.

From a Seahawks perspective, the results were disturbing — just as were Pruitt’s. In 2006, Pruitt came in to replace Marquand Manuel, who was already playing in place of starter Ken Hamlin, lost weeks earlier to a bar fight in Pioneer Square. Manuel, who just finished his second year as a Seahawks assistant defensive coach, strained a hamstring in the Super Bowl.

Pruitt, a second-year pro from Southern Mississippi and an emergency roster addition playing in only his ninth career NFL game — and, it turned out, his final one — was over-matched. He was supposed to have contain on the 75-yard touchdown run in the third quarter by Willie Parker. In the fourth quarter, he also bit on an end-around play that became the game’s decisive play, a 43-yard touchdown pass from Antwaan Randle El to Hines Ward.

Simon, though a much better player than Pruitt, found himself in a similar predicament. He was a second-year player, but really was a rookie since his first year was wiped out by injury.

In the two-week run-up, the Seahawks prepared Lane to match up against Julian Edelman, the Pats’ top receiver. It was working well enough that Lane picked off Brady in the end zone on a pass to Edelman in the second quarter, which led to the ill-fated return.

After that . . . well, Edelman finished the game with nine receptions for 109 yards, including a touchdown catch in which Simon ended up turning 180 degrees opposite the direction of the pass.

The data masters at ProFootballFocus.com observed that Brady targeted Simon 11 times for 91 yards and two scores. Additionally, Simon missed two tackles, one on Edelman and one on WR Brandon LaFell.

PFF concluded that in his two playoff appearances, Simon was targeted a combined 21 times, surrendering 17 catches for 205 yards and four touchdowns, creating an opponent passer rating of 146.9.

If you wonder why these facts are offered up now, the annual NFL scouting combine is underway in Indianapolis, where teams will close in on their choices for the draft. As speculation grows as to whether the Seahawks most need an upgrade in the offensive line, at receiver or maybe running back to replace Marshawn Lynch, all worthy ideas, I would submit that cornerback is the priority because Simon is unlikely to graduate to officer rank in the Legion of Boom.

I mean, how much more evidence does anyone need than two Super Bowl losses  stemming from weakness in the same personnel group?  (Let’s not revisit the Seahawks’ final offensive play just now; it will be with us for the lives of our children’s children’s children.)

Yes, the failures of Pruitt and Simon can be considered coincidental. It is also true that Seattle is  a defense-first team at the insistence of coach Pete Carroll, who also insists the defense be built from back to front. Since the approach has elevated the Seahawks to consecutive Super Bowls, it’s hard to argue with the plan.

The Seahawks payroll reflects the plan’s priorities, with long-term, expensive deals retaining CB Richard Sherman and safeties Earl Thomas and Kam Chancellor. But the fourth position in the starting secondary is vulnerable, because besides the concern for Lane’s health, the starter, Maxwell, is a free agent.

Given the likely high market for Maxwell’s services, it is also likely the Seahawks will be unable to afford him under the salary cap, given needs elsewhere. So that leaves Simon, who has shown little to indicate he is a starting corner in the NFL.

To which there can be only one logical response from a discerning 12: Gah.

The point is not to pick on Simon after 13 career games; the point is that he has shown little of the skills and mindset rife in the Seahawks’ most important unit.

So the best and least expensive remedy, given the heavy investment already in the secondary, is the draft. And the best guy there could likely be . . .

Our friend Rob Rang and his mates at NFLDraftScout.com at CBS Sports have ranked the 6-foot, 198-pound junior the draft’s second-best CB, behind Michigan State’s Trae Waynes. They project him as the 29th overall pick. The Seahawks select at 31.

“He is the clear-cut No. 1 corner in this class,” McShay said. “But teams are going to have to really look into his maturity and accountability.”

Huskies fans know enough about Peters and his rampant immaturity, including getting kicked off the team at midseason, to know he has more red flags than Moscow on May Day.

Peters has been on a media campaign to repair his image, admitting to reporters that he deserved his punishments, and more. How sincere his contrition is remains to be discovered by NFL scouts starting this week in Indianapolis.

Sure it’s a risk. So is defending against Brady and Bill Belichick with a man down and others wounded. The Seahawks have been Etric-ked enough.