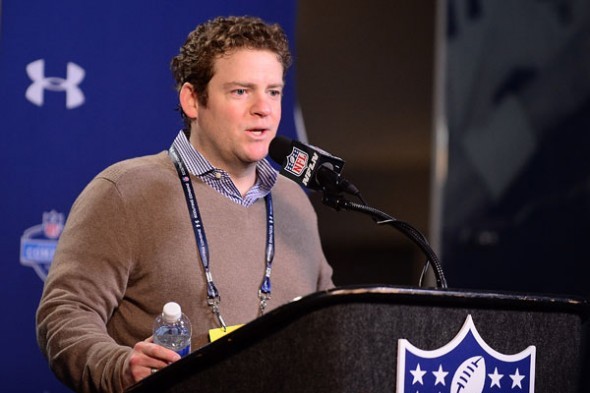 During his 15-minute press conference at the NFL combine in Indianapolis Thursday, Seahawks GM John Schneider had little new to add about the status of Marshawn Lynch, said he still hasn’t “gotten over” the team’s final offensive play in Super Bowl XLIX, and indicated that the Seahawks would be entertain offers for their 31st overall pick in the draft.

“I’m still not over that play,” said Schneider, referencing Russell Wilson’s goal-line interception that cost the Seahawks an opportunity to win back-to-back Super Bowls. “That’s the kind of play that’s always going to stay with you. It won’t go away. But it’s the kind of play that drives you. As an organization, we always talk about having no finish line, so we’re moving forward.”

The bigger question now is whether Lynch is prepared to play in 2015. Lynch, soon to turn 29, completed his eighth season in the NFL, including four and a half with Seattle. He’s already exceeded 2,000 career carries. While coming off a 1,300-yard, 17-TD season, he has reportedly contemplated retirement.

“We have no clarity on Marshawn’s situation yet,” said Schneider, who is willing to rewrite Lynch’s final contract year of a $5 million base to reportedly as much as $10 million. “Marshawn is a phenomenal player and a heartbeat guy. He’s done a great job of taking care of himself and he always comes in ready to go. But everybody needs time away from the game to push the reset button, and especially him with the way he runs the ball.

“I’ve talked to his representatives a bunch and he knows we want him play. But there are a lot of great running backs who have just walked away from the game. Marshawn hasn’t given us any indication that he would leave. So we have no idea right now what he’s going to do. But we’d like to know soon.”

Schneider did not specifically address the kind of upgrades he would like to make in the draft, but the Seahawks require boosts on their offensive and defensive lines, and at wide receiver, cornerback and tight end.

“The 31st pick is valuable,” Schneider said. “And if anybody’s listening, you can come and get it.”

Another major offseason storyline involves a new contract for Wilson, who is expected to become one of the highest-paid quarterbacks in the league.

“We have no timeline on a new contract yet,” said Schneider.

Already booked for surgery to repair his broken left wrist, Schneider revealed CB Jeremy Lane injured his knee on the ssame Super Bowl play and will require surgery too.

Lane’s interception of a Tom Brady pass looked to be big for Seattle, but it proved costly when Lane left the game and had to be replaced by CB Tharold Simon, who was targeted 11 times by the Patriots for 91 yards and two scores.

“He hurt his knee and shattered his wrist on the same play,” said Schneider, who indicated it was unknown whether Lane would be available to open next season.