Neither D.J Peterson nor Patrick Kivlehan have a clear path to the majors. But both Mariners prospects will get to showcase at spring training. 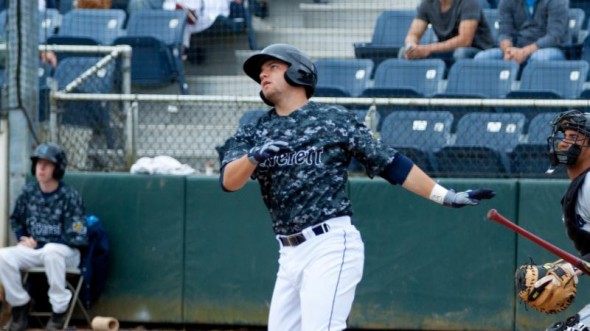 Top prospect D.J. Peterson will play some first base in spring training as he vies for a spot on Mariners opening day roster. / University of New Mexico athletics

When general manager Jack Zduriencik was asked about fast-rising prospects D.J. Peterson and Patrick Kivlehan at a Mariners media luncheon in January, he made it clear that he doesn’t know what position either will play.

That doesn’t mean they won’t get their chances.

Peterson and Kivlehan were invited to big league camp at the team’s remodeled headquarters in Peoria, AZ., where most players report Tuesday.

Barring injuries to players in front of them, both face long odds of breaking camp with the the big club.

A third baseman, Peterson’s path is blocked by reigning All-Star Kyle Seager, whom the club signed this off-season to a seven-year, $100 million base contract after Seager earned his first Gold Glove in 2014.

He played 19 games at first base.

“He’ll play third. He’ll got a shot at first. Who knows where he’s going to end up in the long run?” Zduriencik said. “But we all do think he’s going to hit. He’s got a gift to hit the baseball. That’ll play for us at some point.”

Peterson would be further along in his development, but he was struck in the jaw by a fastball in August 2013 while playing for Class A Clinton. The result was a broken jaw, a two-week hospital stay and three months without doing any baseball-related activities.

“Unfortunately he lost part of a year,” Zduriencik said.

Kivlehan is listed as an outfielder in the spring training guide. That’s a half-truth. The former safety at Rutgers will also get work at first and third base, according to Zduriencik.

Kivlehan, a West Nyack, NY., native, played four years of football at Rutgers, then switched to baseball his senior season and won Big East Player of the Year. The Mariners took him in the fourth round of the 2012 June draft. A little less than three years later, he’s pushing for a spot on a major league roster.

As with Peterson, the Mariners are intrigued by Kivlehan’s ability to drive in runs. Both are well-built, right-handed hitters.

“The one thing that our guys in the fall league said about (Kivlehan) was he doesn’t leave an RBI out on the bases,” Zduriencik said. “We’ll see. He’s come quickly considering he didn’t play for four years in college. There’s a lot of makeup time there, but he’s also very intense, hardworking, and he kind of made up some time.”

The 25-year-old played 34 games last season at High Desert before a promotion to Jackson. He hit .295 with 20 home runs and 103 RBIs over 138 games. He spent the bulk of his time in the Southern League playing third base (58 games, compared to 26 at first and 13 in left field). In the Arizona Fall League, he moved back to first.

Asked by MLB.com what he considers his position, Kivlehan said, “I really don’t know, honestly, what it is nowadays.”

He’s ranked as the sixth-best prospect in the organization by MLB.com, while Peterson checks in at second behind converted OF Alex Jackson, the club’s first selection (sixth overall) in last year’s draft. Gwynn said Jackson, 19, considered the best high school hitter of last year’s class, will likely start in Clinton. Baseball America named him the top prospect last season in the Arizona Rookie League.