Sophomore Nigel Williams-Goss has reached the final round for the Bob Cousy Point Guard Award despite not being included on the original watch list of 35 players. 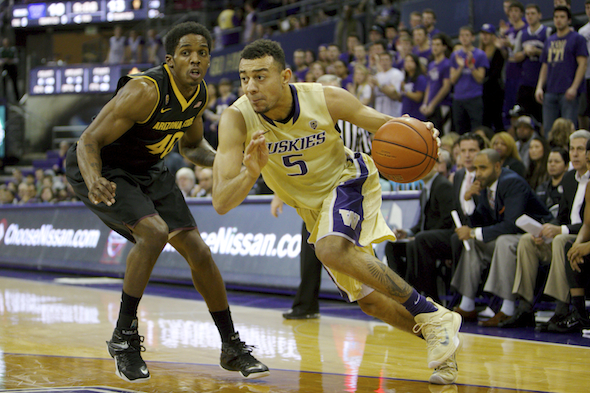 University of Washington sophomore Nigel Williams-Goss has been named a finalist for the 2015 Bob Cousy Point Guard of the Year Award. Williams-Goss was not on the original watch list of 35, but was added to the final list of 16 due to his play as the season progressed. The Naismith Hall of Fame made the announcement Friday.

Williams-Goss is one of four point guards on the final list from the Pac-12, along with T.J. McConnell of Arizona, Tyrone Wallace of California and Delon Wright of Utah. The Pac-12’s four finalists lead all conferences. The ACC has three and the Big 12 and Big Ten each have two.

The list of 16 finalists will be reduced to five players by early March. The final five will be presented to the Hall of Fame’s selection committee comprised of top college basketball personnel. The winner will be presented at ESPN’s new College Basketball Awards program in Los Angeles April 10.

Williams-Goss has started all 25 games this season and is leading the team in scoring (15.2) and assists (6.0). He is ranked 14th nationally in assists per game and is one of two players averaging 15 points, 4.7 rebounds and six assists per outing. The other player is another Cousy finalist, Kris Dunn of Providence.

Williams-Goss accounted for 40.5 percent of UW’s scoring this season, based on his scoring and assists. He has assisted on 40 percent or more of the team’s points in 15 of 25 games and has accounted for more than 50 percent in five outings.

Williams-Goss has reached 20+ points in five outings and led the team in scoring 10 times while reaching at least 10 points in 19 of 25 games. He’s dished out six or more assists in 19 games, while posting double-digit assists twice. Williams-Goss recently set the UW sophomore single-season record for assists (151), seventh on UW’s overall single-season list.

The sophomore leds the Pac-12 assists per game and minutes, averaging 36.7 per. In conference action, Williams-Goss is averaging 38.7 minutes and has played all 40 minutes in five of the last six outings. Additionally, he ranks 21st nationally in minutes per game.

The Huskies play at Washington State Sunday at 5:30 p.m.