The Raiders and Chargers are exploring building a $1.7 billion stadium in Los Angeles to house both teams. Leverage play? At least. But the key is no public funding, Listening, Seattle? 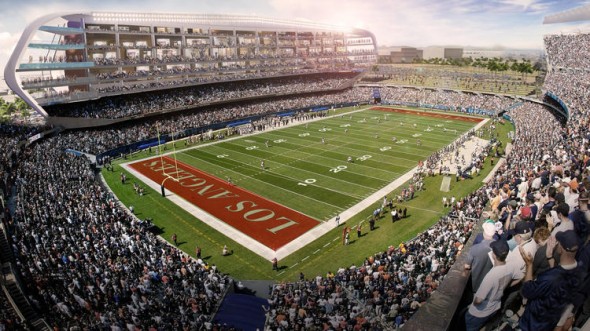 Artist’s rendering of a proposed football stadium in Carson, CA., to house the Raiders and Chargers — if both fail to get new stadiums in Oakland and San Diego. / MANICA Architecture

Much as I would love to chat about 40-yard dash times and bench presses, the information that comes out of the annual NFL combine that is truly valuable can be squeezed into the same thimble bearing the valuable news on evening gowns at the Oscars. Fleeting is an adjective that only begins to describe the wispy-ness in that thimble.

The past week, however, there was NFL news that did have some substance — an announcement that the San Diego Chargers and Oakland Raiders have joined forces to explore building and sharing a $1.7 billion stadium in Carson, CA., 15 miles south of downtown Los Angeles, that would house the teams in the way the MetLife Stadium in New Jersey serves the New York Giants and New York Jets.

The proposal had two key words that impressed me about the project: Private financing.

From a Seattle perspective, abandoning fan bases is grim. It’s going on seven years now since the NBA pirated the Sonics to Oklahoma City, but the open wound for many has yet to scab over.

Purely from the standpoint of business and political strategy, however, this threat of an LA solution is diabolically clever. It puts two cities on notice that the long stadium fights are nearing an end — the Chargers’ pursuit of a new playpen is 14 years old, and the Raiders’ pursuit of same apparently predates the invention of indoor plumbing — and needs only a single stadium.

The proposal could be a colossal bluff, intended to create the necessary leverage in each city to get electeds to capitulate on their resistance to commit tax dollars to new stadiums. Or, after 20 years of no pro football in the nation’s second-largest city and at least as many failed plans to fill the void (including Ken Behring’s ill-conceived plan to move the Seahawks to Orange County in 1996), this could be the idea that works. Without endorsing it directly, the NFL has known of the plan since inception.

In fact, the NFL has toyed several times with purchasing the nearly 170 acres itself.  Now two teams own the land.

The move was in apparent response to an announcement last month that St. Louis Rams owner Stan Kroenke plans to build a stadium in Inglewood, on the grounds of the old Hollywood Park race track, with plans to move the Rams back to where they came from in 1994.

All three franchises share a key element in the sudden land rush to LA: They are operating on year-to-year leases with their current landlords, so they can flee relatively easily. All three cities share something in common as well: Shrinking local and state tax revenues that are, with each passing year, in higher demand for critical civic needs.

The Carson plan gains momentum automatically because it eliminates the need for government outlays and a second stadium. Developers believe that personal seat licenses, which were a big part of the MetLife financing, along with stadium naming rights and a subsidy from the NFL’s G-4 fund dedicated to stadium financing, can work in LA and cover the construction cost.

Whether the deal pencils is unknowable now. But the attempt at least casts a shadow north to Seattle, where Chris Hansen’s plan to build an arena seems rich in nothing but potential snags. Not the least of his problems is the the pursuit of up to $200 million in public funds to complete an arena in SoDo with a deal that requires he first land an NBA team.

Not only has the NBA not offered the least hint of interest in relocation or expansion, there is little evidence of a political will to change the memorandum of understanding with the city to allow the NHL to bring a team first. And the Seattle City Council has at least three veteran members who are not running for re-election.

Recently the Seattle Times has reported that investors who are eager to bring hockey to Seattle have quietly pursued sites in Bellevue and Tukwila, independent of the Hansen project.

While these speculators are figuratively many miles away from a plan that would cost at least $500 million to build and likely another $500 million to acquire a team by expansion or relocation, the money men need to note that the electeds here are no more inclined to help fund an arena than their counterparts in Oakland and San Diego. And Los Angeles. And San Francisco.

So take a cue from the Carson project: Don’t ask.

Hansen will be the first to point out one major, obvious difference between Seattle and Los Angeles: It is a much smaller market. It is also smaller than San Francisco, where the Giants ballpark was built without public funds.

From the beginning, Hansen said that the Seattle public contribution, which is a sort of loan using the city’s less expensive bonding capacity, was essential to make the private risk manageable.

But Hansen did most of his calculations with Seattle’s demographic numbers from 2011. Perhaps a look out the window to the construction cranes spiking up around America’s fastest growing city in 2015 might produce a different conclusion.

Regardless, what Hansen envisioned in 2011 as a generous offer to assume much of the expense, which it was, is beginning to look a bit dated, or at least politically unworkable as long as the NBA remains out of reach.

Given the delays in the project, coupled with the inevitable litigation that will follow the attempt to build in SoDo with some public funds, a change of venue is becoming increasingly realistic.

Hansen is right. Seattle is not Los Angeles. But increasingly, Seattle is not Seattle. Whether you view that as lamentable or laudatory, it is, without a doubt, inevitable. The good thing is it there figures to be enough rich guys, be they owners or suite buyers, to carry off this project without public funding.