Andrew Andrews scored a career-high 35 points as the Huskies picked up their first win in a month Sunday with an 87-84 win over Washington State in Pullman. 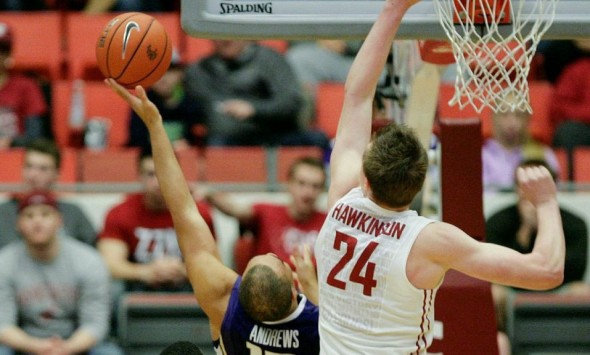 Andrew Andrews gets two of his 35 points over the Cougars’ Josh Hawkinson as the Huskies stopped their seven-game losing streak Sunday night in Pullman. / Gary Breedlove, Sportspress Northwest

PULLMAN – Nigel Williams-Goss considered turning pro after his freshman season at Washington, but he decided a second year with the Huskies would be a good thing.

Washington’s talented backcourt tandem played starring roles in squashing the Huskies’ seven-game losing skid Sunday night. The Cougars gave Andrews his proper due after he capped a career-high, 35-point performance by draining a game-winning 3-pointer with 2.7 seconds left, but the Cougars were even more effusive in their praise of Williams-Goss after an 87-84 thriller came to a dramatic conclusion.

“Nigel was exceptional in the game,” Cougars coach Ernie Kent said. “We had no answers for him.”

“His stats (20 points, six assists) may not have been crazy,” WSU guard DaVonte Lacy said, “but he dominated the game using his point guard ability. That’s why he’s one of the best point guards in the league, and he proved it.”

What Williams-Goss, Andrews and the rest of the Huskies did not prove is that they are ready to take on the Pac-12’s elite. The Huskies fought valiantly to win a road game in which they trailed most of the way, but they remain in 11th place after barely defeating a rebuilding WSU squad that has lost six conference games by 15 points or more.

Picky, picky. The Huskies were in no mood to worry about details after winning for the first time in a month.

“I’m just glad we got the win,” Andrews said. “I was tired of losing.”

The Huskies, in fact, had not emerged victorious since Andrews hit a last-second jumper to beat Colorado 52-50 on Jan. 22 in Boulder. Andrews seems accustomed to playing the role of hero, because he seemed every bit as calm describing Sunday’s game-winner as he looked when taking the shot.

“Any time I shoot,” he explained, “I feel like all of them are going to drop.”

Andrews fueled his lofty expectations by burying 11 of 18 shots, including 6 of 12 from 3-point range. All four figures are career highs for the junior guard from Portland, whose previous career high of 22 points came against Utah Jan. 25.

Williams-Goss, Washington’s career leader with 5.1 assists per game, fed Andrews the ball on the high right side for the game-winner. Williams-Goss had calmly drained the clock after WSU’s Que Johnson tied the score by sinking two free throws with 36.7 seconds left.

“They hit a big bucket and big play,” Kent acknowledged. “The game did not come down to the last possession. I thought the game was lost for us in the first half.”

Kent was referring to the fact that his team had a struggling team down 11 before the Huskies closed to within four at intermission. The Cougars led most of the game, but there were 10 ties and seven lead changes in the second half of a contest short on defense but loaded with entertainment value.

“There’s not a lot of negative I can say about the game,” Kent said, “outside of the fact that the last possession was a tough one because we had the right defense on the floor, did not rotate quick enough.”

Kent said Ike Iroegbu, one of the young WSU point guards outplayed all night by Williams-Goss, “froze a little bit when he should’ve gone out on the wing a little bit sooner” to defend Andrews’ winning shot.

It probably wouldn’t have mattered. After all, Lacy was in Andrews’ face a minute earlier when Andrews buried a deep 3 to put the Huskies on top by two.

“I couldn’t contest it any better without fouling,” Lacy muttered. “He did his job.”

The Cougars, Kent acknowledged for the umpteenth time this season, did not do the job on defense. The Pac-12’s worst defensive team gave up 87 points on 50 percent shooting – 57.1 percent in the second half – to a team that had not scored more than 68 points or shot better than 37.9 percent in the previous three games. The Cougars (11-15, 5-9 Pac-12) lost despite shooting 55.3 percent, including 61.9 percent in the second half, before an enthusiastic, season-high crowd of 5,567 at Beasley Coliseum.

“We played good basketball at the offensive end,” Washington coach Lorenzo Romar said. “Obviously, we scored a lot of points, but we only turned the ball over three times and were able to get 17 assists, so I thought that was pretty efficient basketball.”

Lacy, a senior from Tacoma who was not recruited by the Huskies, took the loss particularly hard.

“It sucked,” he said, “especially when players are ready, the crowd turned out. It sucks. That’s all I can really say right now. It sucked.”

The Huskies respectfully disagree. Their eighth win in 10 tries against the Cougars avenged an 80-77 home loss to WSU last month. Washington’s season records improved to 15-11 overall and 4-10 in the Pac-12 with four games left before the conference tournament in Las Vegas. Romar hopes his players can build momentum after halting the losing streak.

“It was weighing on them,” Romar said, “but hopefully that was what was able to get us over the hump — not wanting to go through that feeling again after a loss.”

Call it the power of negative reinforcement. Whatever the term, the result was positive for Washington. Finally.