The Seahawks are paying for a 1,000-seat expansion in the Clink’s south-end upper concourse, which will feature a partly covered party deck. 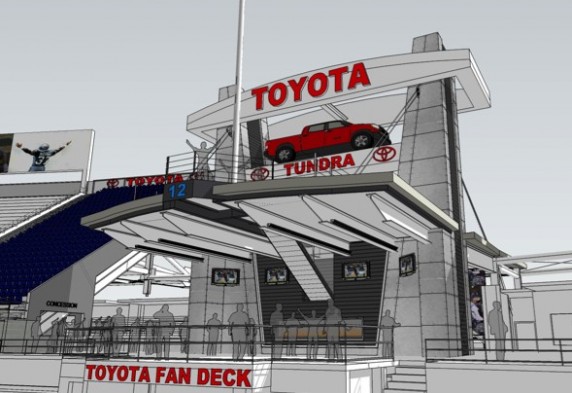 The Toyota Fan Deck will add 1,000 seats to the Clink’s south end. / Seahawks.com

Just what NFL opponents wanted to hear — more seats in the Clink.

Perhaps the least efficient part of the Seahawks’ home stadium, the south end upper concourse that features the ritual of the 12th Man flag, is getting an extra 1,000 padded seats and a party deck. The best part about the expansion of the state-owned CenturyLink Field is the Seahawks are funding it.

The makeover, already underway and scheduled to be ready for the 2015 season, is called the Toyota Fan Deck and will have two sections of seating around a partly covered open-air viewing and gathering area.

“The Toyota Fan Deck will give the 12s an enhanced game day experience while allowing us to accommodate some of the growing demand for tickets,” said Seahawks President Peter McLoughlin in a release Monday. “Toyota has been a great partner of the Seahawks since 2006. With their renewed commitment, together we can create this new seating area for the benefit of our amazing Seahawks fans.”

Ticketholders in the new seating sections will have exclusive access to the deck, which features a club-like atmosphere with multiple televisions, an eight-foot-long fireplace, views of the playing field, as well as food and beverage stands. The deck will make more visible the pre-game tradition of the raising of the 12th Man flag.

Current season ticket holders, about 62,000, will have priority to relocate in the Toyota Fan Deck through a seat relocation process in the spring. Remaining seats will be offered to the Blue Pride waiting list, which is capped at 12,000 seats. There are an additional 52,000 on the Blue Pride Notification List.

The Seahawks have sold out 105 consecutive games since 2003. Average ticket price last season was $111, according to Forbes.