Michael Yormark, president of Jay Z’s Roc Nation that reps Robinson Cano, is ready to take the wraps off the Mariners’ All-Star second baseman in his second year in Seattle. 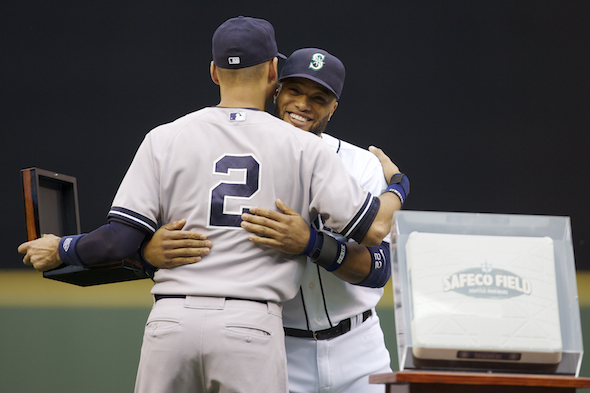 For a $24 million-a-year pro athlete who shocked the sports-business world by leaving New York and the Yankees for South Alaska, Robinson Cano cast a small shadow in 2014. Unlike Russell Wilson, Marshawn Lynch and other Seahawks, the Mariners’ second baseman Cano, as an entrepreneur, didn’t even sell beads at street fairs.

“That,” said Michael Yormark, president of the Roc Nation sports super-agency, “was by design.”

And that is so over.

The chief of branding and strategy of Jay Z’s high-profile agent business is in town this week to plot the ascent of Cano that befits one of MLB’s premier players. The low profile in the first year of his stunning, $240-million, 10-year deal was at the request of the Mariners.

“They wanted him to get acquainted, get comfortable, become a leader and pull the team to the next level, which he did successfully,” Yormark said Tuesday. “Now, we can be more aggressive.

“Think about it. He was a Yankee for a decade, following some great leaders like Derek Jeter, whom he looked at as an older brother. Robbie’s thrown into a market across the country where he knows no one, has no family, and he’s asked to be a leader in the clubhouse. That had to be his focus, aside from a few key functions.

“It’s important he build his life here in the Seattle market. He’ll build it through partners, and in giving back to the community.”

The first step comes Wednesday, when Cano, at spring training, will be introduced nationally as a regional endorser/ambassador for Sparkling Ice, a sparkling-water beverage produced by Talking Rain of Preston, 20 miles east of Seattle and one of the region’s fastest-growing companies.

Sparkling Ice made a splash the past summer when Kevin Durant, the one-year Sonic who was the NBA’s MVP in 2014 playing for the City That Shall Not Be Named, became its first sports-celebrity endorser.

Durant, Cano and Ndamukong Suh, the Detroit Lions’ defensive lineman and arguably the No. 1 player in NFL free agency, are all clients of Roc Nation.

While Yormark claimed no knowledge of Suh’s or NFL teams’ intentions, he was aware of Suh’s expressed interest in playing for the Seahawks, the NFL’s top defensive team that also is a three-hour drive from his hometown of Portland.

Yormark, a New Jersey native who spent 12 years as president of the National Hockey League’s Florida Panthers before being hired last year by Jay Z, didn’t have much experience with Seattle, but seems to be piling up frequent-flyer miles here.

“When I came out here with KD (Durant), he said, ‘Man, I miss this place,'” he said. “Your community is one of great kept secrets in America.”

Yormark needs to try Denny Way at rush hour, then make that “secrets” claim. But as with the rest of the country, the Seahawks have helped him with his bearings.

“The Seahawks have been an amazing catalyst to raise the profile of your city and make athletes look at this place,” he said. So did the Mariners’ move to break the bank for Cano.

“Let’s not kid ourselves — the money is why he came here, but it’s turned into so much more than that,” Yormark said. “The community, the comfort, the way he’s been embraced and frankly, the way the Mariners have treated him — they are a first-class organization.”

That description is not one that easily tumbles from the lips of fans contemplating the club’s 13 consecutive playoff-free seasons, yet is not surprising coming from a guy who is being made wealthy by Mariners’ largesse. Nevertheless, Yormark is seeing something worthy from Kevin Mather, the second-year club president who succeeded Chuck Armstrong.

“Kevin calls me once a month,” he said. “He asks, ‘How’s Robbie? How’s he adjusting? What can we do?’ Mather is a great leader. He knows the importance of making players feel a part of the family. From the day Robbie got here, he’s felt like that. Put the money aside — you want people to appreciate you and make you feel part of the family.

“Granted, they pursued him aggressively. But he’s a sensitive guy, and he knows when people are being genuine with him. I sat with Robbie in the Dominican (Republic, Cano’s home)  and he said it was a magical year for him.”

Besides the endorsement of a beverage brand from the Seattle market, Cano plans some engagements with kids, including the April 18 opening of the baseball season for the Mercer Island Boys and Girls Clubs, where he will throw out the first pitch. Later in the summer, he will hold clinics for kids from Rainier Vista and other South Seattle clubs where baseball seeks a stronger foothold.

The big event is June 3 at the Paramount Theater. Cano and friends are planning a high-end fundraiser that includes a sit-down dinner and Latin entertainment he’s calling “Canoche.” The plan is to let Seattle people get acquainted with him and his cause — the building of 22 new school buildings in the Dominican, where Cano rose from extreme poverty.

Yormark made the announcement during his participation on a panel at the Seattle Chamber of Commerce’s quarterly Executive Speaker Series. Fellow panelists were Seahawks CEO Peter McLaughlin and Sounders part owner Adrian Hanauer. Yormark praised both for generating major financial and field success.

“It’s about winning and culture,” he said. “That’s what makes an organization special. You’ve got it in Seattle.”

As a pro sports executive who in 12 years with the woebegone Panthers experienced four owners, eight coaches and seven general managers, he would seem to be in a position to appreciate getting and keeping a good thing going.