Thiel: The astonishing return of my stolen laptop

A bad guy made off with my laptop. A good guy brought it back — a newcomer to town who risked a lot for a stranger. Stranger still, he has fondness for journalists. I still can’t believe it. 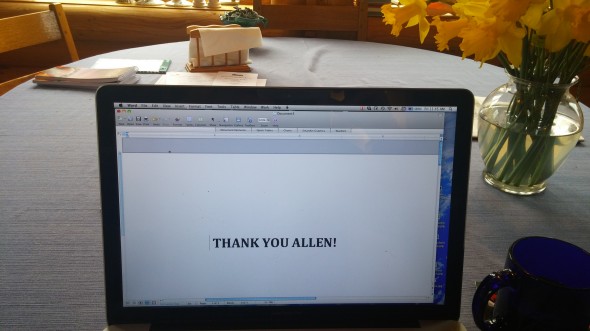 Returned safe and sound, the laptop speaks for itself.

Packing most of one’s business documents and some personal folklore into an easily portable machine is a risky fact of digital life most people have come to accept. Another fact of the times is that bathroom breaks are inevitable when work is done at a coffee shop.

Lugging a laptop to the pot is clumsy. So sometimes I take chances. As a typical guy who can get into and out of a bathroom in about one-minute-plus, I rationalize my vulnerability.

What are the odds that, in a room of apparently earnest people hunched over screens of their own, that one of them will instantly pounce upon my aging laptop and flee as I pee? Now I have to go online and browse through options on https://guruverdict.com/best-laptops-under-1000 again when I shouldn’t have to.!

Probably about the same as throwing an interception on second-and-goal from the one with the fate of the football world at stake. It’s OK 99 times out of 100, but when it doesn’t work, the foolishness is so profound it tears a hole in the space/time continuum.

Often on Thursday afternoons, following a weekly one-hour segment on AM 1090 The Fan’s Steve Sandmeyer Show, I wait for rush hour to dissipate at the Uptown Espresso coffee shop downtown at Fourth and Wall. I get better-than-Starbucks coffee, write a story, catch up on emails, use the bathroom.

Sometimes I ask fellow denizens to please watch my stuff. As they sometimes ask of me. It’s cool. Civil. Reassuring. Sometimes, I assume too much, like Thursday. As previously  established, I’m foolish.

When I returned to my table in the corner, my MacBook Pro laptop was gone. Power cord too. I felt my face flush, and a buzz filled my ears. By the look on the faces of people nearby, they knew something had just happened, not sure what. Inexplicably, there was a tablet left in the place where my computer sat. A swap?

Finally someone said, “I think your computer was stolen.”

A quick glance out of the shop’s floor-to-ceiling windows revealed a young man in a gray knit hat racing south on Fourth Avenue, crossing Wall against the light. He seemed to run like a thief. I gave chase.

Immediately, I thought of Danny Westneat’s Seattle Times column about tracing, via its signal, an iPhone stolen from his daughter, discovering the device was still in  possession of the thieves, yet the cops were unwilling to do anything about minor property theft.

But I haven’t upgraded to iCloud’s Find My Mac. Nor have I packed a combination laptop lock. I couldn’t get mad at anyone but me and the thief.

As I searched the street for the knit hat, I was flooded at once by a jumble of thoughts about the imminent disaster.

As I came to an intersection, I slowed, surveying in four directions, seeing little and hearing nothing but a pounding heart. This wasn’t a James Bond movie, where the trailing guy always guesses right about the next direction in the chase. My eyes swept people, cars, buses. I looked behind me. Nothing. My knees sagged.

Coming at me. Confidently. Laptop and cord in hand.

He was on me in a moment. I made a fist — until he handed me the computer.

“Dropped it in the alley, and I thought about chasing him, but getting the computer back seemed like the important thing,” he said nonchalantly. “Hope it still works.”

“Funny thing was, his pants were on a little low and they started sliding down his legs. He wasn’t running very well.”

Smiling, he started walking back to the coffee shop. The moment I comprehended what just happened — I was chasing the hero, not the villain — I felt like all of New England after the interception.

Spluttering, I thanked him, quizzed him and wanted to genuflect. He brushed off any cash reward. As we turned back into the shop, most everyone looked up.

I held up the computer, pointed to him and said, “Everyone, meet Allen, the Good Samaritan,” which was met with a robust round of applause.

We returned to the table where the caper began. I learned Allen had been at an outside table when he spotted the miscreant, then came inside to leave his tablet on my table chase with free hands. The tablet remained where he left it. Allen somehow was not proven foolish too.

What he was, was pissed.

“I was angry,” he said. “I saw him come in. He looked kinda nervous. I knew he was up to something.

“I saw you leave the table, and then he took off (with the laptop). I knew if it had happened to me, I’d want help.”

I sat down at the table, opened the laptop and pleaded to the Mother of All Motherboards. The MacBook fired up with no impact from its kidnapping, fall and grimy abandonment (I directed a golf clap to Steve Jobs).

In my semi-delirium, I realized after a few minutes that Allen was gone. I re-kicked myself. I wanted to talk to him about what just happened to us. We were strangers thrown together in a physical crime that was solved by him in less than five minutes, which almost never happens. I was trying to cope with the stupendous, alone.

But again he reappeared out of nowhere, coffee cup in hand. He had been sitting around a corner, out of my sight.

“Is it working?” he said, smiling. I said yes. I also asked if we could talk.

Over the next 45 minutes over coffee, we talked. He told me about himself, and I told him I was a sports journalist who had to tell this story. He surprised me again.

“This doubles my feelings,” he said. “I like journalists. I can get lost in the New York Times for hours.”

What is more unlikely: Finding someone to chase down a bad guy in an alley for the benefit of a stranger, or finding someone who likes journos?

And both the same guy? You thought the Super Bowl ending was preposterous.

A native of Texas, Allen Lambert came to Seattle a year ago via Missoula, where he was in training to become an emergency medical technician with a wild-land fire emphasis. Earlier he worked with AmeriCorps, the national service program, in Texas and California, helping victims with the aftermath of fires. The guy has developed a habit for thinking of others.

After a relationship ended, Lambert moved on to Seattle about the time the Seahawks were cresting. Despite his Texas roots, he didn’t care much about football. He tried out for the first time in his freshman year of high school, “which, in Texas, is about nine years too late,” he said.

But his tiny high school — graduation class of 18 — won the Texas six-man state football championship with a 15-0 record. So when he watched the Seahawks’ victory parade draw 700,000, “I could relate, a little,” he said, grinning.

After taking a full-time job in Sodo, he also related to the Seattle vibe — progressive politics, mountains, forests — and Pete Carroll.

“I love hearing Pete Carroll talk,” he said. “I can listen to him all day. He doesn’t talk like other coaches talk.”

It’s true that Carroll is a rare dude, as is Lambert, sharing a certain boldness of word and deed — although Lambert’s fumble recovery was a bit more heartwarming than Carroll’s recent experience with an interception.

As Carroll might describe it, Lambert is all in. I am grateful.