Chambers Bay: A course fit for the U.S. Open

Awarded the 2015 U.S. Open just eight months after it opened for public play in 2007, Chambers Bay will look more like a British Open than its American counterpart. 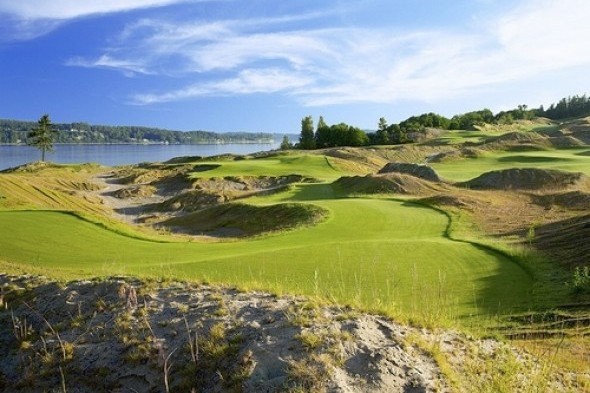 Of the 15,838 courses listed in the national Golf Course Database, fewer than 60 have hosted the U.S. Open, and not one in the Pacific Northwest. That will change June 15-21 when the 115th Open will be conducted at Chambers Bay, an eight-year-old, British links-style layout southwest of Tacoma on the site of an old sand quarry.

Since World War I (the first Open was played in 1895), only two courses younger than Chambers Bay have been awarded the nation’s toughest test of golf.

“In 1965, it was held at Bellerive in St. Louis (Gary Player won) and that course was only five years old,” said Michael Trostel, a senior curator and historian at the U.S. Golf Association Museum.

“Then in 1976, it was held at the Atlanta Athletic Club (Jerry Pate won) and that course was also five years old. So it’s been almost 40 years since we’ve played at a course as young as Chambers Bay. That speaks to a couple of things – the great trust and commitment the USGA has toward Chambers Bay, and also the golf course itself and the design Robert Trent Jones came up with.

“The USGA wants the U.S. Open to be the most complete, comprehensive test of golf possible, whether the course was built 100 years ago or, in the case of Chambers Bay, eight years ago. And I think Chambers Bay will do a really good job of establishing that.”

Awarded the Open a mere eight months after it opened in 2007, Chambers Bay was conceived precisely with national-caliber events in mind.

Prior to the course’s construction, the 610-acre University Place site sat unused for years until Pierce County determined that a municipal golf course, along with open parkland space, beach access and parking trails, made the most sense for the public land. To its credit, Pierce County envisioned from the outset a world-class course capable of hosting major championships, and entered into a partnership with the Robert Trent Jones II architectural design firm to make the plan a reality.

Almost simultaneously, the USGA, always on the prowl for championship tests of golf, began steering its sights toward the Pacific Northwest, specifically Washington. Eventually, the county teamed with the USGA and Jones to collaborate on a course tailored to the highest standards – exactly the kind that is fit to host the Open.

That’s why it took a only eight months for Chambers Bay to receive the 2015 Open. The course was practically a shoo-in for the tournament during groundbreaking ceremonies.

Curator/historian Trostel, based at USGA headquarters in New Jersey, provided a timeline when he visited the Seattle-Tacoma area recently as part of an Open advance team.

“The Open didn’t come west of the Rocky Mountains until 1948, so it took us more than 50 years to do that,” he explained. “The game for so long was played in that East Coast corridor, but once it broke west of the Rockies, it was simply a matter of trying to match up what would work for the USGA.”

For an Open site, the requirements are many. While a great golf course is obviously mandatory, the USGA must also match that with other considerations, including lodging, traffic flow, and adequate space for corporate hospitality — plus the willingness of a course to host, which not all want to do for a variety of reasons. Chambers Bay, for example, is expected to attract approximately 230,000 spectators from all parts of the U.S.

“There are a lot of reasons why it took so long to come out to the Pacific Northwest, but my guess is that this certainly won’t be our last time. We need to get to new places and we’re starting to break out of the mold of the courses where the Open has traditionally been played.”

Not many Opens have been on links-style layouts such as Chambers Bay, which is characterized by rolling fairways, towering dunes, undulating greens and unpredictable coastal winds.

“This Open is going to look a lot different,” said Trostel. “It’s not going to be lush, and it’s going to play a lot differently from previous Open courses. That’s a good thing. There really aren’t many (Open) courses that have looked like or will play like Chambers Bay. Shinnecock Hills (Long Island, NY.) has a little bit of that feel.

“When people tune in, the Open might look more like a British Open than a U.S. Open, and since this is our first time out here, the players won’t be familiar with it. They are going to have to come here and play a bunch of practice rounds. It’s going to be interesting to see how they deal with the conditions. When people think of the 2015 Open, say five years from now, they just won’t remember who won, but that it was at Chambers Bay and had a certain look. That will be a big part of this championship.”

While this will be the first Open contested in the Northwest, it won’t be the USGA’s first exposure to the area. Over the years, the organization has presented more than two dozen events on the region’s courses, including the 1946 U.S. Women’s Open (Spokane Country Club), 1961 Walker Cup (Seattle Golf Club), 2010 U.S. Senior Open (Sahalee) and 2010 U.S. Amateur (Chambers Bay).

“The Northwest is an under-appreciated area for golf,” said Trostel, who estimates that less than one percent of all courses are equipped to host an Open. “It’s actually a fraction of a percent. It’s a pretty exclusive club, and the No. 1 factor is that it needs to be a great golf course.”

Chambers Bay is ranked as the nation’s No. 1 municipal course (Links Magazine) and the No. 1 public course in Washington (Golf Digest). Not all courses are built to attract those sorts of rankings.

“It’s not always the goal when courses are built,” said Trostel. “Sometimes you are building a resort course, other times you’re building a course that’s fun for the members to play. But for a national championship, you want to challenge the players and you need a course that’s capable of doing that.”

Through the efforts of Pierce County, the USGA and Jones, Chambers Bay will soon become only the third muni, following Bethpage in New York and Torrey Pines in California, to host the Open.

“It’s going to be a boon to the economy and great for the area,” said Trostel.