Seahawks radio analyst Warren Moon said Marshawn Lynch is distrustful of many, which was why he hinted he believed Seahawks wanted Russell Wilson to be Super Bowl hero. 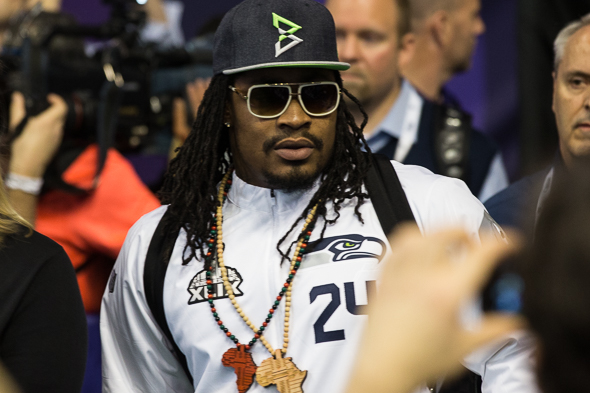 On Super Bowl media day, Marshawn Lynch was there only so he wouldn’t get fined. If the event were held in Turkey, things might have been different. / Drew McKenzie, Sportspress Northwest

In a radio interview Tuesday, Warren Moon tried to explain why Marshawn Lynch seems hesitant to rejoin the Seahawks, saying the Seahawks’ ultra-controverisal throw vs. run decision on Seattle’s final offensive play of the Super Bowl feeds into a long-held suspicions of many others.

“Part of Marshawn’s problem is he just doesn’t trust a lot of people and that trust goes into this same call at the Super Bowl,” Moon, a Hall of Fame quarterback and the Seahawks; radio analyst, told Rich Eisen during a phone interview for DirecTV’s Audience Network and the Fox Sports Network. “He just probably doesn’t think that they wanted him to have the football for all the reasons that he said, but that’s just Marshawn.”

Lynch hasn’t spoken publicly to U.S. media since the Seahawks lost to New England 28-24, but over the weekend in Turkey, where he’s part of group of NFL players on tour giving clinics, he sat for a TV interview in which he hinted that the Seahawks on the fateful play didn’t want him to score the decisive touchdown.

“I had no problem with the decision of the play calling. I mean, you know, I think it was more of a  . . .  how do I say this? When you look at me, and you let me run that ball in, I am the face of the nation. You know, MVP of the Super Bowl, that’s pretty much the face of the nation at that point of time.

“I don’t know what went into that call. I mean, maybe it was a good thing that I didn’t get the ball. I mean, you know, it cost us the Super Bowl. I mean, I have full . . . I have full confidence in my teammates to execute that plan because we’ve done it so many more times. But would I love to have run the ball in? Yes, I would have.”

The “face of the nation” remark seems to imply that, given a choice of TD scorers, Lynch thinks the Seahawks would rather have the more cooperative, safe Russell Wilson hoist the Lombardi Trophy rather than see him continue his media mockeries that led up to the game.

Lynch’s hint of a personality decision influencing a play call seems dubious given that on the first down play that preceded the throw,  he nearly scored from the 5-yard line, falling a yard short. But it feeds into a storyline from earlier in the season that there was locker room division over a belief by as-yet-unidentified players that Wilson was the golden child favored by management.

Moon, who had a 17-year NFL career with four teams, including 1997-98 with the Seahawks, addressed the issue by saying that’s how quarterbacks are.

Moon also said that, regarding an implication of special treatment for Wilson, Lynch is given all deference when it comes to game prep.

Regarding the contract extension that the Seahawks reportedly have offered Lynch, Moon is clear that he thinks the Seahawks have done what’s necessary to make anyone happy in that position.

“They’ve already put another offer on the table for him to be one of the highest paid running backs in the league, if not the highest paid,” he said. “So they want Marshawn Lynch back around here (despite) all the problems that he can cause for a football team and how much of a problem he is to manage. They still want the guy here.

“He’s a different bird. He’s wound up a little bit differently because of his upbringing, because of the environment that he grew up in and some of the things that have happened to him earlier in his career. All that thinking by him is understood; doesn’t mean it’s always valid, but it’s understood.”

Moon’s analysis is a worthy effort, but it’s hard to say if we know more than we did about Lynch and his immediate future. He did explain the issue of Wilson’s place in the Seahawks firmament, which is obvious to many around the game:

Nearly every successful starting QB in the NFL is on an island, still part of the team but apart from it. The QB typically operates more closely with the coaches than any other player, makes more money, gets more endorsements and gets more credit.

Jealous? Sure. Who wouldn’t be? But to be upset with that position is to complain that the president gets to fly Air Force One instead of riding commercial coach with the rest of us. It’s the job. Deal with it.