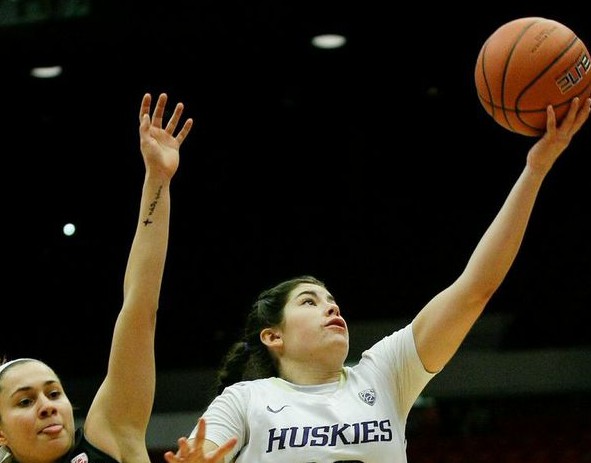 Despite a sore right knee that will require post-season surgery, Washington’s Kelsey Plum has risen above the rest of the Pac-12 Conference. / Gary Breedlove, Sportspress Northwest

Washington Huskies basketball star Kelsey Plum is a woman of mystery, for better or worse. Inevitably, it’s better for the Huskies and worse for opponents.

Plum, who leads Washington into the Pac-12 Conference women’s tournament at KeyArena this week, says she faces post-season surgery on a right knee injured in late December. She’s worn a brace since, but she refuses to let anyone publicly disclose what is wrong with the knee.

Plum said doctors have assured her she risks no further damage by continuing to play, and Plum says her knee is “doing pretty good right now.” However, Washington coach Mike Neighbors said, “Ninety percent of the kids in America would be out with what she’s got.”

Kelly Graves does not doubt Plum is injured. Still, the Oregon coach wondered aloud about the severity of the injury when Plum played 33 minutes and scored a game-high 20 points in a recent win over the Ducks.

“She can’t be hurt that bad,” Graves muttered.

Graves noted that Plum continues to drive to the basket with abandon when she isn’t knocking down silky-smooth jumpers. Plum says she’s two inches shorter than her listed 5 feet, 9 inches and weighs 150 pounds “on a good day,” but she ranks among the national leaders in free throws made and attempted.

“She does a very good job of getting in there and drawing contact,” says teammate Talia Walton, a 6-2 forward who has attempted 39 free throws. Plum has made a league-leading 214 trips to the line, an average of 7.1 per game.

Plum, a sophomore shooting guard from the San Diego area, also leads the Pac-12 with 23.0 points and 90.2 percent shooting on free throws. She hits a team-leading 40.0 percent of her 3-pointers and ranks second on the Huskies with 3.4 assists and 1.6 steals.

“She’s just a phenomenal player,” Walton said. “I love playing with her.

“She’s a hard worker. She’s always trying to be the first on the court and the last one off it.”

Plum was a consensus All-America point guard as a senior in high school before joining the the U.S. gold medalists at the 2013 Under-19 World Championships in Lithuania. With gold medal in tow, Plum headed straight for Seattle from Lithuania so she could join her new teammates.

“Every other member on that team flew to their homes,” Neighbors said. “Kelsey flew to Seattle. She never even went to San Diego. Her mom and dad didn’t even know.

“She came straight to Seattle from Lithuania, got to work (practiced) that night. Got picked up at the airport, and they were playing 2-on-2 that night at midnight.”

Plum said every Pac-12 school and perhaps “70 or 80” schools overall offered her a scholarship. She chose a Washington program that was rebuilding.

“I think a lot of players, especially in the women’s game that are recruited highly, go to the same schools. You know: UConn, Stanford, Tennessee, Notre Dame, Duke.

The rebuilding gained steam during Kevin McGuff’s two years as head coach, and Plum remained loyal to the Huskies after McGuff left for Ohio State prior to her freshman season. Neighbors was promoted to replace McGuff, and in Neighbors’ second season in charge, the Huskies are 22-8 and eying their first NCAA tournament since 2007.

Plum has led in every way. She’s 21 points away from the school record of 712 she set as a freshman (when she ranked fourth in the Pac-12 with a 20.7 average), and she’s a team co-captain for the second year in a row.

That’s right. Neighbors made Plum a captain before she ever dribbled a ball in a college game.

“Sure, I was worried,” Neighbors admits. “But she called me. She said she was ready for it, wanted to do it.

Plum’s parents were college athletes. Neighbors said Jim Plum (a football and baseball player at San Diego State) and Katie Plum (a volleyball player at UC Davis) helped Plum develop grit. Plum credits teammates such as senior point guard Jazmine Davis for helping her transition to the college game and learn how to lead teammates as a freshman co-captain.

“I’m the type you have to throw in the fire,” Plum said. “I kind of like that.

“He (Neighbors) really threw a challenge at me. There were a lot of mistakes I made (last season) that kids make. Hopefully, I can continue to get better as a leader and player.

“But I think it (serving as a co-captain last season) was really crucial for just growing up. Not only on the basketball court, but in life.

“You mature in a lot of ways. You’re no longer responsible just for you, but for other people. I’m grateful for the experience.”

The Washington Huskies, in turn, are grateful for Kelsey Plum.

The tournament champion earns the Pac-12’s automatic bid to the NCAA tournament . . . Stanford won the Pac-12 tourney seven years in a row before USC prevailed last season . . .  Three teams are ranked in The Associated Press Top 25: No. 8 Oregon State, No. 9 Arizona State and No. 19 Stanford. California came in 26th in this week’s voting. Washington garnered the one vote given to other Pac-12 teams . . . Washington split with Utah this season, but the Utes tied for last place and are 0-13 on the road. “The last time we played them, they played absolutely great,” Plum said. Taryn Wijijowski, a 6-3 forward, leads Utah with 14.6 points, 9.0 rebounds and 48 percent shooting from the field. The other Utes shoot just 36 percent. Washington leads the Pac-12 with 75.6 points per game; Utah ranks last at 54.6 . . . Washington State and Oregon tangle in the first round for the second consecutive year. The Cougars set a tournament scoring record in a wild, 107-100 triumph over the Ducks last season, but Oregon’s defense has improved considerably in the first season under former Gonzaga coach Kelly Graves. Oregon is led by 6-3 forward Jillian Alleyne with 18.4 points (third in the Pac-12), 15.1 rebounds (second in the nation) and 27 double-doubles (first in the nation). Guards Lia Galdeira (19.7 ppg) and Tia Presley (17.1 ppg) spark the Cougars, who have wobbled a bit down the stretch since losing senior center Shalie Dheensaw to a knee injury.

First round (with seeding)