Three so-so wins and a home loss to BYU have the skeptics gossiping, as per usual when Gonzaga approaches tourney time with a gaudy record. 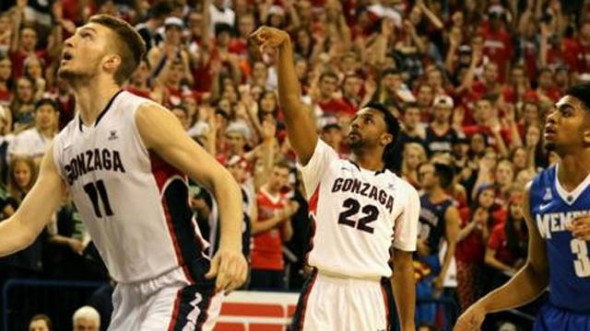 Skeptics have been waiting to pounce on the Gonzaga Bulldogs all season. It took 3½ months, but the Zags have finally fed some meat to the carnivores.

When Gonzaga’s 22-game winning streak ended Saturday in a 73-70 loss to BYU, some observers made it sound as if the seventh-ranked Bulldogs are the worst 29-2 team in college basketball history.

True, Gonzaga has again breezed through another Charmin-soft schedule in the West Coast Conference. Also, three months have passed since the Bulldogs played one of just two Top 25 opponents they’ve faced.

On Dec. 6, Gonzaga blew a late lead in a 66-63 overtime loss at No. 3 Arizona. Way back on Nov. 17, in the second game of the season, the Bulldogs beat shorthanded Southern Methodist 72-56 when the No. 22 Mustangs visited Spokane.

Most college basketball teams can only dream of having nothing more than a pair of three-point losses separating them from an unbeaten season. The Bulldogs, however, are coming off four decidedly uneven performances heading into the WCC tournament in Las Vegas that begins Friday.

Gonzaga had to rally from 17 down to win at Saint Mary’s; needed 45 points from Kyle Wiltjer to pull away late from last-place Pacific; played a miserable first half against San Diego’s .500 squad; then got outworked by red-hot BYU.

“I’m concerned, but I’m concerned all the time,” Gonzaga coach Mark Few said. “That’s pretty much the state of mind I’m in all season.”

BYU snapped Gonzaga’s 41-game home winning streak on a night when the nation’s third-leading scorer, Tyler Haws, struggled mightily for the Cougars. Except for a tie at halftime, the Cougars led from the opening basket.

“They came in here and were just far more aggressive than we were,” Few said.

“That was the story of the game,” Gonzaga guard Byron Wesley agreed.

The subplot was another poor shooting performance by Gonzaga’s two leading scorers. In the past two games, Wiltjer has scored nine points on 4-for-16 shooting (0-for-5 on 3-pointers). Point guard Kevin Pangos has produced 11 points while sinking just 4 of 19 shots (3-for-11 on 3’s).

“I’ve got to continue to keep my head up and I’ll be fine,” Wiltjer said.

Gonzaga supporters certainly hope so. The 6-foot-10, 240-pound Wiltjer possesses a feathery 3-point stroke and dazzling low-post moves. He worked diligently to improve his game and his body when he sat out last season after transferring from Kentucky.

A redshirt junior from Portland, Wiltjer boasts career highs of 16.5 points, 5.7 rebounds, 53.0 percent shooting from the floor and 44.9 percent from 3-point range.

“I don’t think I’ve seen a 6-10 guy with the package he has offensively,” Wesley said. “He can really hurt you.”

“He’s been an unbelievable senior leader,” Few said. “Just really taking it to heart like nobody we’ve ever had.”

Pangos is averaging a career-low 11.6 points, but his 1.4 turnovers also are a career low. Often content to distribute the ball on a team loaded with scoring options, Pangos averages a career-high 5.0 assists. His shooting percentages of 46.4 from the field and 44.6 from 3-point range are two more career bests.

“Kevin is extremely talented,” Wesley said. “A great shooter, and a great leader as well. Everybody on this team looks to him as a leader. He just does a good job of staying calm.”

On Tuesday, WCC coaches named Pangos the league’s Player of the Year. Pangos and Wiltjer are among 14 finalists for the Oscar Robertson Trophy for national POY, but Few and Loyola Marymount coach Mike Dunlap had publicly declared Pangos No. 1 in the WCC long before Tuesday’s announcement.

“He’s the best player on the best team,” Few said.

“He’s far and away the best all-around player in the league,” Dunlap said.

A year ago, Pangos averaged career highs of 14.4 points and 34.4 minutes played. Both numbers are stunning when one considers the fact that Pangos – a notorious gym rat — had to drastically reduce his practice time while playing with turf toe most of the year.

“The toughness that he showed last year was just off the charts,” Few said. “People have no idea.

Now Pangos aims to help Gonzaga repeat as the WCC tournament champion for the third consecutive season. Then comes a 17th straight trip to the NCAA tourney. The loss to BYU may have cost the Bulldogs a No. 1 seed in the Big Dance, but a No. 2 spot certainly seems within reach.

“We’re going to have a special journey,” Pangos told the Senior Night crowd after the BYU loss, “so stick with us.”

Second-seeded BYU (23-8 with six wins in  a row) figures to pose the biggest challenge for top-seeded Gonzaga in Las Vegas. Both teams have first-round byes Friday, then debut in Saturday’s quarterfinals at the Orleans Arena. Gonzaga faces the winner of Friday’s game between eighth-seeded San Francisco (13-17) and ninth-seeded Pacific (12-18). ESPN2 televises Gonzaga’s opener at 6 p.m.

On the women’s side, top-seeded Gonzaga (23-6) plays at noon Friday (BYUtv and TheW.tv) against No. 8 seed Loyola Marymount (7-23). The women’s tournament opened Thursday – the two-time defending champion Bulldogs had a first-round bye — and the Lions advanced to the quarterfinals with a 68-67 win over No. 9 Pepperdine.

Women’s teams take Saturday off, and Sunday is an off day for everyone, since Mormon-run BYU doesn’t play on Sundays. Both BYU teams lost to Gonzaga in the finals last year.

The men’s and women’s semifinals are set for Monday, the title games for Tuesday. As usual, the Orleans Arena will be filled largely by thousands of Zag Nuts when Gonzaga’s men and women play.

The Gonzaga men are the only Top 25 basketball team in the WCC , so the Zags might be the only team that is assured of an NCAA tournament berth without earning the automatic bid that comes with a WCC tournament crown. Regardless, the Bulldogs have every intention of playing in the title game for the 18th consecutive year and winning for the 13th time in that span.

“The season does get long and repetitive,” Pangos said. “We don’t play as many games as the NBA, but still, it’s long, so tournament time is kind of a refresher.”

The Bulldogs can only hope they haven’t already grown too stale.