Washington and Washington State have no shot at winning the Pac-12 tournament, while UCLA and Stanford still have something meaningful at stake. 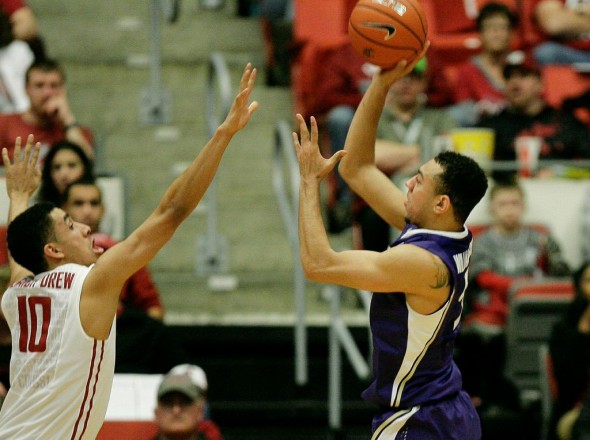 The Huskies’ Nigel Williams-Goss and the Cougars’ Dexter Kernich-Drew are likely to see their teams one-and-done in the Pac-12 tournament next week. / Gary Breedlove, Sportspress Noerthwest

A look around the college basketball landscape reveals six conferences — Big Ten, Big 12, Big East, SEC, ACC, American — that are expected to put more teams in the NCAA Tournament than the Pac-12.

As of Wednesday, No. 5 Arizona, No. 13 Utah and Oregon were projected by ESPN bracketologist Joe Lunardi to make The Big Dance. That number, which puts the conference in a tie with the Mountain West, could go up or down as the regular season wraps up this week before the Pac-12 tournament runs March 11-14 in Las Vegas.

Not that the next 10 days will affect fans of Washington or Washington State.

The odds of the Huskies or Cougars reeling off four wins in as many days to win the Pac-12 tournament and earn an automatic NCAA Tournament bid range between itty-bitty and teeny-weeny. Washington (15-13, 4-12 Pac-12) has lost nine of its last 10 entering its final homestand of the regular season, which begins Thursday against Colorado (6 p.m., Fox Sports 1).

UW’s season imploded Jan. 26 when C Robert Upshaw was dismissed for a violation of team rules. That loss was compounded because F Jernard Jarreau had to sit out about six weeks of the conference season because of arthroscopic knee surgery before returning Feb. 22 in a road win over WSU. F Shawn Kemp Jr. sustained a concussion that night and subsequently missed UW’s two-game swing against UCLA and USC.

Even durable PG Nigel Williams-Goss had to watch Saturday at Galen Center while a short-handed UW team was steamrolled 70-55 by the last-place Trojans (11-18, 3-14 Pac-12) after spraining his ankle against the Bruins. He returned this week.

But Kemp strained his calf a few days ago in practice after his concussion symptoms apparently subsided. He will sit out Thursday and probably miss Saturday’s 1:30 p.m. matchup with the Utes (Pac-12 Networks).

“It’s not something you’re really able to prepare for,” coach Lorenzo Romar said Wednesday of the injuries.

If WSU splits with Utah and Colorado this week and captures at least one game in the Pac-12 tournament, the Cougars might be positioned to play in the CBI (College Basketball Invitational), a third-tier postseason tournament that has all the appeal of a straight-to-DVD Nic Cage movie. The Spokesman-Review first reported the CBI news.

Utah and Colorado both routed the Cougars earlier this season. Wednesday, Kent admitted WSU will need to do pretty much everything better if they are to upset the Utes.

“We’ve got to play a lot smarter, a lot tougher and a lot better defense,” he said. “The smartness is on the offensive part of the floor, the toughness is just the game in general and obviously the defense is on that end of the floor as well.”

Lunardi ranks the Cardinal (18-10, 9-7 Pac-12) in his “Next Four Out” category, meaning it needs to do something dramatic to earn an at-large bid to the NCAA Tournament.

Sweeping the Arizona schools this week on the road would qualify. The Cardinal plays the No. 5 Wildcats Saturday at 1 p.m. at the McKale Center, and a win would go a long way in proving that Stanford’s run to the Sweet Sixteen last season wasn’t an aberration. It would also boost their 56 RPI rating.

The Bruins (19-12, 11-7 Pac-12), meanwhile, topped USC Wednesday night in their regular season finale to guarantee a fourth place finish in the Pac-12. That clinched the final first-round bye in next week’s Pac-12 tournament. It also meant that for the first time since 2006-07, UCLA went undefeated at home in conference play, with its only blemish coming in a loss to Gonzaga.