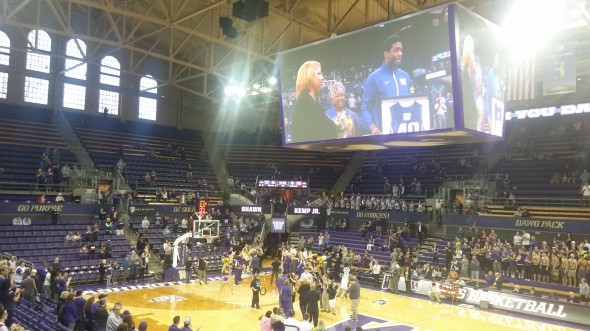 The senior day pre-game introductions, including for Shawn Kemp Jr., were met with a modest gathering. / Art Thiel, Sportspress Northwest

It’s fair to wonder what possesses someone to squander a glorious early spring afternoon in Seattle to attend the final game of a Huskies regular basketball season that was the equivalent of an upright piano falling down five flights of stairs.

A team that started out 11-0 would certainly fall to 13th-ranked Utah and finish with losses in 11 of its final 12 games. Dunno what kind of record that is, but it’s at least a two-headed calf — something that must be seen. It was also the worst time in coach Lorenzo Romar’s 13 seasons at Washington, also another thing worth seeing, if only for ghoulish sportswriters.

But the Huskies screwed up the history and all its story lines. Saturday, they played their finest 40 minutes since they were whole, healthy and free of unpleasant aroma.

They out-rebounded the Pac-12’s tallest team 26-23, forced the Utes into 14 turnovers and held Utah’s remarkably agile seven-foot center from Austria, Jakob Poeltl, to a single field goal in the second half after the big freshman went 7-for-7 in the first half.

The decisive final six minutes were minus 21 feet of frontliners (the suspended Robert Upshaw, the injured Shawn Kemp Jr. and the fouled-out Gilles Dierickx, valiant if overmatched again in a 31-minute start at center).

The win didn’t save the job of Lorenzo Romar — AD Scott Woodward confirmed three weeks ago Romar would carry on, not the least because the coach has five years remaining on his contract, which would cost the athletic department $4.2 million in a lump-sum buyout by April 1.

What it did was restore a measure of dignity for Romar and some confidence among battered players, whose numbers had been decimated to the point where, after five games in a row with a different starting lineup, they began to despair. It appeared as if they were quitting on Romar’s trademark — defense.

Now that a big win was in hand, Romar could concede the obvious.

“If we had a team with four or five pros on it, and one guy is out, you can play through that,” he said. “If your key player is out a long time, it will catch up with you.

“I don’t think we have that much margin for error. When you see a guy go down, then another, then another, then another, it can become deflating. You can talk about being a Superman where nothing affects you, but subconsciously (the number of absent players) can begin to get to you. I felt like toward the end, our guys were mentally drained from (the emotions that followed) being 11-0 and 13th in the country.”

It must be said that even when Upshaw, the nation’s leading shot-blocker, was still on the team, they dropped four in a row. But his Jan. 26 suspension started a cascading impact that cratered the Huskies. At least until Saturday, less than 48 hours after a home splattering from Colorado.

“It was very tough on our guys,” he said. “I was very proud they came back today and generated some energy and focus. Hopefully, we take that into the tournament.”

Saturday morning, the Huskies looked like the easiest one-and-done in tourney history. By mid-afternoon, the Huskies had 28 points from revived Nigel Williams-Goss, three 3-pointers from revived forward Jernard Jarreau (he had two all season) and inspired play throughout the meager roster.

“Today was fun to watch from a coach’s perspective,” said Romar. “We played right for 40 minutes on both ends of the floor.”

Even in a depleted state, the Huskies proved to themselves that they were Pac-12 capable. They may be the only 11th seed in conference history to own wins over three teams in the national top 15 when the matchup was played (San Diego State and Oklahoma, before Utah).

They can’t go far. But they can go up. And perhaps for a second game in Vegas. The skeptics mocked, but on a Saturday afternoon, I saw a three-headed calf.

Romar said he didn’t know if Kemp’s calf injury will allow him to play in the Pac-12 tourney, saying the healing hadn’t progressed as fast as they hoped. Reserve guard Donaven Dorsey (turf toe), who sat out Saturday, likely will be available . . . The Utes entered the regular season finale as one of two teams nationally not to allow an opponent to score more than 72 points . . . The official crowd count was 7,386, but the attendee count was barely half that for senior day, when Kemp and Mike Anderson (15 points, four rebounds with his mother and daughter in house) were saluted.