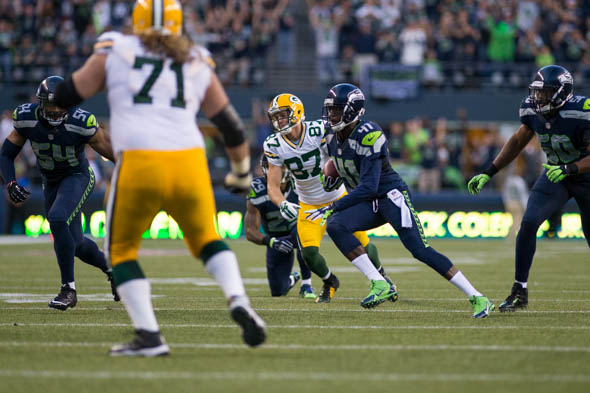 Byron Maxwell returned an interception 21 yards against the Packers in the season opener at the Clink. / Drew McKenzie, Sportspress Northwest

Nothing is official until the start of the league year Tuesday, but according to multiple reports, including this one by Pro Football Talk, the Philadelphia Eagles will sign CB Byron Maxwell to a deal that includes $25 million guaranteed. This marks the second consecutive year the Seahawks have lost a starting corner (Brandon Browner to New England last year) in free agency.

Maxwell’s impending move to Philadelphia comes as no surprise. The Seahawks are heavily invested in CB Richard Sherman and safeties Earl Thomas and Kam Chancellor and don’t have the cap room — they made a last-ditch effort to keep him — to also include Maxwell, who said Saturday that the “Eagles will be a good fit for me.” Sunday, Maxwell told ESPN, “I’m going to Philly.”

Atlanta, coached by former Seattle defensive coordinator Dan Quinn, figured to be a bidder for Maxwell, but backed off, apparently due to the corner’s high price.

A sixth-round draft pick by Seattle out of South Carolina in 2011, Maxwell took over as a starter five games into the 2013 season, picked off four passes, and played well enough that the Seahawks didn’t make an effort to re-sign either Browner or Walter Thurmond.

Maxwell started all but three games in 2014. Maxwell had two interceptions and 12 passed defensed, playing both the outside corner spot opposite Sherman and the nickel spot at different times last season. Opposing quarterbacks tested Maxwell once every 5.7 snaps and recorded an 81.1 passer rating against him.

Also Sunday, the Seahawks re-signed TE Anthony McCoy, who has missed the past two seasons with Achilles tendon tears. McCoy was Seattle’s sixth-round pick in 2010, out of USC.