Clint Dempsey scored twice and Martins delivered a spectacular header as the Sounders opened the season with a romp over New England. 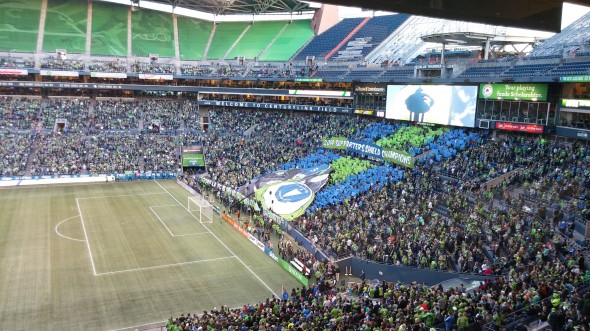 The Emerald City Supporters rolled out a pre-game tifo, “Supporters’ Shield Champions,” before the game Sunday night at the Clink. / Sportspress Northwest

That’s how good the season opener was for the Sounders Sunday night at the Clink. Against the team that had the second-best mark in 2014, which delivered the Sounders’ worst loss in their MLS history (5-0 May 11), the Sounders, in clean, clinical fashion, dispatched the New England Revolution 3-0.

For those who cannot resist the pull of geographic coincidence, the avenging of the Seahawks’ Super Bowl defeat took a second unrelated step. The first was the winter in Boston (go with it, 12s; it hurts nothing).

A veteran starting unit showed why almost no changes were needed in the lineup by delivering the two final goals in a fashion that bordered on the majestic.

In the 41st minute, 5-foot-7 Obafemi Martins did a full Nate Robinson, leaping flat-footed in front of the goal to out-jump 5-11 defender Andrew Farrell and snap in a header off a perfect cross from newcomer Tyrone Mears, the EPL vet hired to replace the departed DeAndre Yedlin.

In the 57th minute, Martins captured a splendid through-ball from Marco Pappa to draw out goalie Bobby Shuttleworth, who was helpless when Martins dropped off the ball to an unmarked Clint Dempsey. He dropped the pea in the ocean.

The Martins/Dempsey duo flashed brilliantly at times last season. With a training camp together and minimal interruptions for national duty, the chance looms for a slash-and-burn campaign through MLS.

“Our fans here are seeing something unique and special,” coach Sigi Schmid said. “I thought they took a little time to get into their rhythm, then they were good. Individually, they’re so dangerous. Collectively, they make it hard for center backs on whether to step up, and which to step up to. They take turns.”

“I love playing with Oba,” said Dempsey, who scored the first goal in the 25th minute on a penalty kick. “He’s one of the players I’ve enjoyed the most playing with in my career because it reminds me of being a kid playing pickup style. We just think alike and know that if you make the right run he’s going to find you.

“Hopefully we can do this season what we did last season.”

Martins was second in the 2014 voting for Most Valuable Player, and Dempsey was among the heroes in the U.S. run in the World Cup. To watch the quality of their interaction is mindful of Jordan-Pippen.

“I think it’s even better (this year) because we have each other’s back,” Dempsey said. “We try to give each other good looks in-game. We showed that we can both be unselfish and both create opportunities for each other.

“Obviously, you’ve got to give credit to the whole team, because the whole team makes everything work, but it is special to play with a player like Oba.”

For pure athleticism, Martins’ scoring leap was a thing to behold, just as was his post-score ritual of cartwheel/roundoff/backflip.

“Man, he’s got the biggest thighs and quads on the team,” Schmid said, grinning. “He can definitely jump. He doesn’t play like a guy who’s his size that’s listed. He is so athletic. That was a fantastic header.

“It wasn’t like it was a running jump — that was straight up — so it was pretty impressive.”

On the other end, the clean sheet was a great start for Brad Evans, who played center back for the first time and also missed most of practice during the week while helping negotiate the collective bargaining agreement.  And Mears at left back showed his savvy after 13 years in the EPL.

His first Clink experience, in front of the usual sellout (39,782), was all that he had heard about.

“It was fantastic,” he said. “I’ve said it’s the reason why I came to MLS — to play in front of these fans. It’s like going to Old Trafford or Anfield in the Premier League.

“That’s the way it is in this stadium.”

It’s a new season, but there was no need to remake anything working so well.